The Principles of Economic Justice

As we saw in the previous posting on this subject, the Great Depression of the 1930s revealed serious problems in the U.S. economy, problems that were not really addressed by the program of John Maynard Keynes, which really only made matters much worse than they needed to have been.


Louis Kelso invented the Employee Stock Ownership Plan (ESOP) to address these problems, but the ESOP was itself an application of the principles Kelso had worked out when he observed what was going on during the Great Depression.  This was enacted into law in the 1970s.
Contrary to popular belief, adoption of the ESOP legislation was not an end in itself, but a step along the way toward the goal of making every child, woman, and man on Earth a capital owner.  Neither was it a beginning, but the result of years of effort on the part of Kelso and others to make the “Expanded Ownership Revolution” a reality.
Nor did the initial enabling legislation create the ESOP.  Kelso had installed the first ESOP in 1956 for the workers of Peninsula Newspapers in Monterrey, California.  Several hundred other ESOPs had followed.  What surprises non-Americans — and today, many Americans — is that in the United States one of the last remaining vestiges of the sovereignty of the human person under God is the fact that anyone can do anything he or she likes as long as it is not illegal.
Integral to the Expanded Ownership Revolution are the three principles of economic justice explained in The Capitalist Manifesto,(Louis O. Kelso and Mortimer J. Adler, The Capitalist Manifesto.  New York: Random House, 1958.) the first book Kelso co-authored in 1958 with the Aristotelian “Great Books” philosopher, Mortimer Jerome Adler (1902-2001).  Their second book, The New Capitalists, (Louis O. Kelso and Mortimer J. Adler, The New Capitalists.  New York: Random House, 1961.) had the provocative subtitle, “A Proposal to Free Economic Growth from the Slavery of Savings.”
Kelso became acquainted with Adler while taking one of Adler’s “Great Books” courses.  Later, at a social event, Adler made a comment that Kelso claimed was inconsistent with “the theory of capitalism.”  Adler, as any good teacher should, immediately challenged Kelso with the declaration, “There is no ‘theory of capitalism’.”
Not one to hide his light under a bushel, Kelso instantly shot back his response.  “Yes, there is,” he retorted, “and I’ve written it!”
Of course, what Kelso defined as “capitalism” and that found its way into the title of both books he co-authored with Adler was not what Chesterton and Belloc — or even Karl Marx — would have called by that term.  To Kelso and Adler, a capitalist economy is one in which the non-human factors of production predominate, displacing, even eliminating the need for human labor.
As Chesterton remarked, however, “If the use of capital means capitalism, then everything is capitalism.” (G.K. Chesterton, The Outline of Sanity, Collected Works, Vol. V.  San Francisco, California: Ignatius Press, 1987, 43.)  Nor was Kelso completely comfortable with the term — although using it in the titles of his books certainly helped the first one make the New York Times bestseller list in the wake of the McCarthy Hearings! 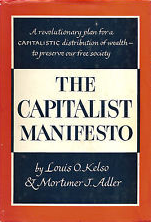 Eventually Kelso settled on the term “binary economics” to underscore the importance of distinguishing between the human and the non-human factors of production.  Combining Kelso’s binary economics with the social doctrine of Pius XI as analyzed by Father William Ferree in a personalist, natural law-based synthesis above and beyond capitalism and socialism that the Center for Economic and Social Justice (CESJ) calls “the Just Third Way.”
At the heart of binary economics are the three principles of economic justice.  Kelso and Adler presented these in Chapter 5 of The Capitalist Manifesto.  CESJ has refined and developed these as interconnected principles of an integrated system consistent with Catholic social teaching.  This was a possibility Adler anticipated in his Preface to his and Kelso’s work when he mentioned Leo XIII and Belloc and alluded to distributism. (Kelso and Adler, The Capitalist Manifesto, op. cit., xi.)
As in any properly designed system, the three principles of economic justice work together to support the system as a whole as well as fill particular functions.  No system designed by human beings can be perfect, of course, but the Kelso-Adler principles provide a framework that, within the constraints of natural law, optimize the possibility for a just and stable economic order.
At the same time, if even one of the principles is missing, violated, or applied partially or incorrectly, the system either fails to operate properly or implodes and does not function at all.  As refined and clarified by CESJ, then, the essential building blocks of economic justice are:
·      Participative Justice,
·      Distributive Justice, and
·      Social Justice.
We will explain these principles in the next posting on this subject.
#30#
Posted by Michael D. Greaney at 6:00 AM