In last week’s news items we looked at President Trump’s tariff proposals from a constitutional point of view.  Not that we’re experts in constitutional law, but we ran our understanding past someone who was a student of William Winslow Crosskey (1894-1968), and he (the student, not necessarily Crosskey) agreed with us.


What started us on this is the fact that people seem to be taking President Trump’s tariff proposals as a fait accompli.  There is, however, a serious constitutional issue involved here.
The president — the head of the executive branch of the government — has no power to tax.  As it states in Article 1, Section 7 of the U.S. Constitution, “All Bills for raising Revenue shall originate in the House of Representatives.”
Now, if Article 1, Section 7 omitted the word “all,” a case could be made that the executive has the power to impose a tariff . . . a very weak case, admittedly, but still a case.  The word “all,” however, necessarily precludes any such act on the part of the executive.
Article 1, Section 8 is actually redundant to a certain extent.  Under the enumerated powers it states that “The Congress shall have Power To lay and collect Taxes, Duties, Imposts and Excises.”  The clear sense of the enumerated powers, of course, is that only Congress shall have these powers. 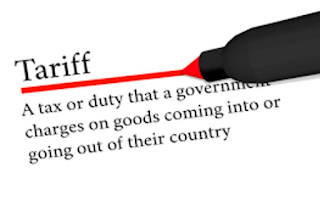 But is a tariff a “tax” as that term is used in the Constitution?  Absolutely.  Going to Black’s Law Dictionary, a “duty” is “a tax or impost due to the government upon the importation or exportation of goods.”  A “tariff”? “[A] list or schedule of articles on which a duty is imposed.”
True, some people have argued that certain laws passed in the last fifty years or so, plus probably some New Deal legislation, do in fact give the president the power to levy taxes in the form of tariffs without the consent of Congress.  If that is the correct interpretation of those laws, however, it amounts to violating a fundamental principle on which the United States is established: No taxation without representation.
The actual intent of the laws referenced might be to give the president some flexibility in trade policy, but if they really do give the president powers that are supposed to belong to Congress alone, then those laws are unconstitutional, and somebody should challenge them.  (As we understand it, the United States Supreme Court cannot rule on a case that has not been brought before it, which includes judicial review of laws enacted by a legislature.)
If that is the case, however, why isn’t anyone in Congress, Democrat, Republican, or Other, doing anything?  Why isn’t anyone with standing challenging the president’s action?
We can only say we don’t know.  The only thing that makes sense — to us — in this situation is that Congress is giving Mr. Trump enough rope to hang himself by allowing him to make the attempt to usurp the powers of Congress.
This would be an unconstitutional act, which would be possible grounds for impeachment.  Very bad grounds, though, as he could very likely cite precedent, and impeachment proceedings would very likely be dismissed, even if the power to levy a tax in the form of a tariff is taken away.
So, even if what President Trump is doing is unconstitutional, and even if interested parties think they can get rid of him by allowing him to do something unconstitutional, it would unproductive, even silly, to attempt to impeach him for doing something he believed he had the power to do, and something in which Congress itself has acquiesced.
So, is there nothing that can be done?
By no means.  It is only necessary for Congress to act and request a ruling on the constitutionality of the executive levying a tax.  An opinion favorable to Congress — as is inevitable, given the clear intent of the Constitution to restrict the taxing power to Congress — would automatically rescind any action by President Trump.
There need not be — and, in fact, could not be — any punitive action taken against President Trump, since doing what you seem to have the power to do is neither a “high crime” nor a misdemeanor, but it would be an important step in Congress taking back its rightful and proper powers and responsibilities.  After that, who knows?  It might even be possible to take back the legislative power the Supreme Court has usurped, so that Congress is once again supreme, as the Constitution intended.
Of course, that still leaves the question of how to deal with the situation President Trump is attempting to address.  There is, however, a better way than a trade war or other punitive measures — which we will look at tomorrow.
#30#
Posted by Michael D. Greaney at 6:00 AM