As we saw in “A More Just Tax, I: Monetary and Credit Reform,” last week’s posting on the subject of a more just tax, there are four essential steps in achieving a more just tax.  The first of these is monetary and credit reform.  This is crucial, not simply because how much someone actually pays in taxes depends on having a stable means in terms of which taxes are measured, but for a host of other reasons as well.


It is pretty obvious that if the currency in which taxes are payable is not uniform and stable, problems are going to crop up.  If there is inflation, the amount someone pays in taxes must keep going up because the amount of money the government needs keeps going up.  If there is deflation, then the amount someone pays may go down, but becomes harder to get.
For example, if taxes last year were $100 and you saved $100 for this year, but because of inflation taxes were doubled to $200, then you need to come up with another $100 just to break even.  The $100 you saved inflated to half its value in terms of when you earned it, which means if you saved money you are worse off than if you had not saved money.
If, however, the price level went down to half due to deflation, you have to work twice as hard to pay your $100 tax bill . . . unless the government lowers taxes by half, which usually doesn’t happen.  The $100 you owe deflated to twice its value in terms of when you incurred it, which means if you didn’t save money you are worse off than if you had.
In other words, both deflation and inflation are bad depending on whether people owe you money, or you owe other people money.  The only way to make it fair is for the value of the currency to be stable in value.  That way you are neither cheated nor cheating due to a change in the unit of measuring value.
But what about the taxes themselves?  After all, no one would say that today’s tax system is just or even marginally coherent.  That is why Capital Homestead reforms would simplify today’s overly complex and unfair tax system by substituting a single-rate tax on non-exempt personal incomes from all sources, while:
·      paying from general revenues all entitlements and other government spending at present levels,
·      eliminating the payroll tax on workers and employers,
·      making dividend payouts deductible to corporations, and
·      balancing the budget. 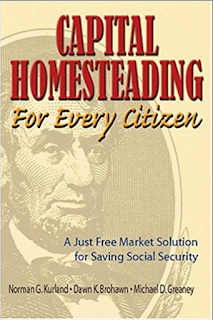 A Capital Homestead Act would re-write and radically simplify the existing federal tax system to balance the budget automatically. Its tax reforms would keep more money in the pockets of taxpayers from their initial earnings to cover their own health, education, housing, and other basic household living expenses. Tax reforms under a Capital Homestead Act would make Congress more directly accountable and responsive to all taxpayers.
While encouraging corporations to issue new shares to finance their growth and pay out all dividends on their shares, the Capital Homestead Act would eliminate all tax provisions, personal deductions, tax credits, and exemptions (except for the front-end exemptions for adults and dependents) that unjustly discriminate against or discourage property accumulations and investment incomes for poor and non-rich families.
A single tax rate on all sources of labor or capital income over exemptions would be automatically set to meet all federal entitlement and other programs, and to pay down past deficits. For example, to meet personal living costs the basic incomes of all taxpayers up to $30,000 per adult and $20,000 per dependent (or $100,000 for a family of four) could be free from any income or payroll taxes. To increase taxable income incomes for all citizens, corporations could escape from the multiple tax on corporate incomes by deducting dividend payouts.
Under the reforms proposed here, a “typical” family of two adults and two children would pay no tax of any kind until aggregate income exceeded $100,000 ($30,000 of exempt incomes per adult and $20,000 per dependent). This family would pay a single rate tentatively estimated at 48% of any income over its $100,000 exemption. The 48% rate on incomes above exemption levels would apply to all forms of income — whether from wages, dividends, capital gains, etc. This is less than what dividend and capital gains income would be taxed currently under the “double (sometimes triple) tax” of up to 50% (35% corporate tax rate plus 15% on dividends and capital gains).
In contrast to the present system, a single tax covering incomes from dividends, interest, rents, and inflation-indexed capital gains would enable the over-burdened Medicare and Social Security systems to be funded out of general revenues. The single tax rate would drop significantly with a broadening of the tax base, as all citizens begin to receive substantial dividend incomes through their Capital Homestead accounts and as entitlements (constituting two-thirds of the current budget) can be radically reduced after keeping all current entitlement promises.
Under a Capital Homestead Act, special gift and inheritance taxes would be eliminated altogether.  Instead, recipients would be taxed on inheritance and gifts as ordinary income . . . and even that tax could be avoided altogether simply by putting any amount received by a single individual as a gift or inheritance up to $1 million in a Capital Homestead Account to purchase income-generating assets.
(A discussion on the difference between a tax exemption and a tax deferral here is unnecessary.  The bottom line is that money could be inherited or received as a gift up to $1 million without paying any taxes.  All taxes, even on amounts over $1 million left to a single recipient could be avoided if the recipient were a tax-free entity such as a foundation or a church.)
The income from those assets would be taxed, but not the principal used to purchase the assets, which would be “tax free.”  A “typical” family of four could thereby inherit up to $4 million “tax free.”  In this way the wealthy would be encouraged to break up the estates they leave to their heirs, so that wealth would not keep concentrating from generation to generation.
#30#
Posted by Michael D. Greaney at 6:00 AM