As the famed Irish attorney John Philpot Curran declared in Dublin on July 10, 1790, “The condition upon which God hath given liberty to man is eternal vigilance.”  Yes, we are aware that this is usually rendered “Eternal vigilance is the price of liberty,” and attributed to Thomas Jefferson, but there is no evidence that Jefferson said it.


The earliest known version of the latter is from The Life of Major General James Jackson (1809) by Thomas Usher Pulaski Charlton . . . page 85, if you care.  As Charlton said, regardless how unpleasant the incidents they relate, biographers are charged with “fastening upon the minds of the American people the belief, that ‘the price of liberty is eternal vigilance’.”: 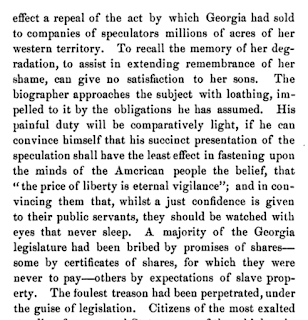 Enough of the history lesson, however.  For our purposes, it’s not important who said it, but whether it is true — and how (or if) it applies to the laws and characteristics of social justice.
In fact, it applies more to social justice than to liberty, for without justice, there is no liberty.  As CESJ co-founder Father William J. Ferree, S.M., Ph.D., explained,
Fourth Characteristic: Eternal Vigilance
Another characteristic of Social Justice is that its work is never finished. This goes beyond what was said above about the time-lag, about the slowness, with which Social Justice is accomplished. The point is that human institutions are always changing, even the most fundamental ones, in the words of Pope Pius XI already quoted, and these changes must always be directed to serve the Common Good. We, as human beings, cannot possibly foresee all the consequences of our actions. The inevitable result is that many of these consequences bring about unforeseen evil results; and as we go through life, acting always without ultimate realization of the consequences of our actions, these evil results pile up, one on top of the other, until many aspects of our social life are disorganized-have become unjust. When we try to correct that injustice even by social action it is clear that our actions once more will have consequences which we cannot foresee, and that many of those new consequences will also be evil.
Besides that, there are a lot of other people who are not even trying to be good; and the evil consequences of their acts also are continually piling up in all the institutions of life. The result is that Social Justice is not only a full-time job as we have seen before, but it is also an all-time job.
A Digression
Here we ought to digress a little bit to show how Pope Pius XI, who brought the theory of Social Justice to completion, provided also an instrument whereby the Christian world could perform this full-time, and all-time, job.
This instrument, which Pope Pius XI called Catholic Action, was both world-wide, in order to be able to face the greatest and most widespread of the modern evils, and at the same time was specialized in every walk of life so that in all that vast organization, not a single “amateur” would be at work. When a doctor for instance, or a banker talks to a hall full of workers on the dangers of Communism, we may safely presume that all he knows about his subject is what he read in the papers; but when a worker himself talks to fellow-workers about the dangers of Communism, he knows the hopes and fears, the injustices, the resentments that have made Communism so attractive to the working masses of the world.
Communism is only one example of such widespread evils. The institution of birth control, to take only one more example, is every bit as widespread, and probably as devastating in the damage which it is doing to Christian civilization.
Many older Catholic organizations have not seen what Pope Pius XI was trying to do with Catholic Action, and they spend a great deal of their time trying to get themselves called “Catholic Action” without having the means to accomplish its purposes. If they would keep their eyes upon the two extremes pointed out here, namely a world-wide organization capable of attacking directly the greatest evils of the present day, and at the same time a movement which has specialized competence inside every natural medium of life, they would not make this mistake.
It can be seen at a glance that if Catholic Action were organized according to the directions and norms which Pope Pius XI laid down, and which the present Holy Father is continuing, then the work of organization of every aspect of life, whose sheer vastness terrorizes or discourages the individualist, would be greatly facilitated.
Not, however, that Catholic Action works directly in the social order or the “temporal order” as it could better be called. It does not. What it does is to organize all Catholics and keep them formed and ready, so that when the time comes for them to enter into the reorganization of any aspect of social life, they have the practical unity, and they have the specialized competence, to do it, and to do it well.
No one who appreciates the concept of Social Justice, as it has come from the pen of Pope Pius XI, can afford to neglect his other concept of Catholic Action. They complete and explain each other.
#30#
Posted by Michael D. Greaney at 6:00 AM