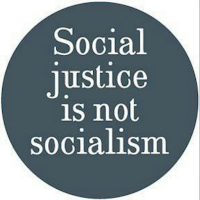 To many people, the term “social justice” is another way of saying “socialism.”  And if we use the term as it was used prior to Pope Pius XI, they are correct.  It was Pius XI, following up on Pope Leo XIII’s efforts to counter the “new things” of religious and scientific socialism, who took the previously vague term and turned it into something meaningful and useful.
And that is part of the problem.  As we’ve noted before, one of the greatest strengths of the socialist movement is that, if people outside the movement have trouble trying to figure out exactly what is meant by socialism, those inside have at least as much difficulty in figuring out where they stand.  The same goes for “social justice.”
Confusing matters even more is the fact that socialists who do understand what is going on find it more useful to baffle even fellow socialists to avoid being pinned down to something specific.  Combating socialism is dealing with smoke and mirrors, largely because socialist knaves find socialist fools so useful.
This is why Leo XIII and Pius XI are so dangerous to the socialist movement and, at the same time so very, very useful.  By “re-editing the dictionary” constantly, socialists can take papal teachings and use them to support their various programs . . . but only if at the same time they can divert attention away from fundamental principles and reason.
Absolutes and the intellect are the greatest enemies of socialism — and the foundation of social justice.  This is because God is the ultimate absolute.  For socialism to have any validity, it must eliminate God and replace Him with collective man.  Not by coincidence, that was exactly what French sociologist David Émile Durkheim claimed was the case.  To Durkheim, “God” is “divinized society.”
Although hardly original with Durkheim, the idea that “society” or the collective is God leads to what we can characterize as the first principle of socialism: that everything, including the natural law, is subordinated to the good of society.  The goal of socialism becomes to change human nature to conform to whatever current fad defines the ideal society for those in power.
For the socialist, “social justice” means implementing whatever measures those in power have deemed desirable.  If this means redistribution of wealth to try and ensure that everyone has equal shares, then so be it.  If it means changing the definition of marriage and family, ditto.
In the socialist framework, anything goes as long as it can be forced on people.  Might makes right.
The social doctrine of the Catholic Church is exactly the opposite of socialism.  Where the first principle of socialism is that everything, including the natural law, must be subordinate to the desired results, the first principle of Catholic doctrine — social and religious — is that everything (and the Catholic Church is adamant that it means precisely that: everything) must be subordinate to the natural law . . . even the supernatural law of faith, hope, and charity.
Why?  If you’re a pagan, the answer is because man is a rational animal, and therefore even religious beliefs must make sense, or at least not contradict what reason tells us.  Faith goes beyond reason, it does not abolish or contradict reason.
Similarly, you cannot violate justice or any other natural virtue on the grounds that you are being “charitable” instead.  Charity does not abolish justice.  As the “soul” of justice, charity fulfills and completes (perfects) justice, it does not abolish or contradict justice.
In Catholic social teaching, therefore, the goal can never be to change human nature as the socialists demand.  What we know of the natural law derives from our knowledge of human nature.  Change human nature, and you change the natural law . . . which in Catholic belief is impossible.
That is why Pius XI said that socialism is based on a concept of society “utterly foreign to Christian truth” . . . or any other kind of truth, for that matter.  Truth is a unity; truth cannot contradict truth.  The first principle of reason, in fact, states this in two ways, one “negative” and one “positive”:
·      “Negative”: Nothing can both be and not be at the same time under the same conditions.
·      “Positive”: That which is true is as true, and is true in the same way, as everything else that is true.
So, in socialism “social justice” means meeting people’s needs directly or forcing people to act contrary to human nature in some manner.  In Catholic theory social justice means changing man-made institutions of the common good so that people can take care of themselves through their own efforts and acquire and develop virtue, that is, become more fully human.
To put it another way, socialist social justice seeks to impose results determined by somebody else, while “Catholic” social justice seeks to create equality of opportunity and access to means so people can make their own decisions.  Socialist social justice takes power away from people and vests it in the State, however you define “State,” from the village all the way up to an empire.  “Catholic” social justice empowers people with control over their own lives.
Ultimately, socialist social justice turns people into “mere creatures of the State.”  “Catholic” social justice puts the State in its place as an essential social tool under the control of people.
The real work of social justice is not to change human nature, but to allow for its perfection.
#30#
Posted by Michael D. Greaney at 6:00 AM