When the United States began gearing up for entry into the First World War, one of the first things the politicians did was decide how to finance the war effort.  Politicians being what they are, of course, they chose to finance the war using debt as much as possible instead of raising taxes . . . which might harm their chances of reelection. 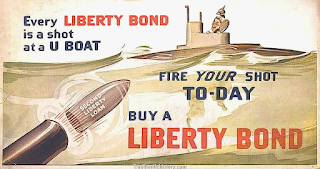 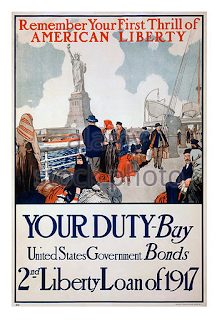 Fortunately, after the war every effort was made to start paying down the debt.  Using the Federal Reserve in a way that was, frankly, in violation of the Constitution — to allow the federal government to emit bills of credit for which they did not have the authority under the enumerated powers — was generally recognized as not a wise use of the central bank.  Only the emergency of the war (and the reluctance of the politicians to raise taxes) had rendered it acceptable.
Unfortunately (notice the “unfortunately/fortunately” thing we have going here), the Crash of 1929 unsettled matters again.  Similar to what had happened in the Panics of 1873 and 1893 and what caused the subsequent Great Depressions, bank reserves shrank radically, and collateral lost its value.  Loans were called, and companies went into bankruptcy.
Even so, had matters been left alone, the Great Depression would have been over by 1936 at the latest, at least according to Dr. Harold G. Moulton, then president of the Brookings Institution.  All that was needed was something to guarantee loans so that businesses could produce marketable goods and services, and a means of ensuring that consumers received enough of the results of production in the form of income that could be spent to purchase the goods and services produced.
In other words, the only thing needed to bring the U.S. and global economy out of the tailspin of the Great Depression was to link production and consumption together so that producers were able to consume, and consumers were able to produce.  This would restore Say’s Law of Markets, which is based on the first principle of economics: “Consumption is the sole end and purpose of all production.”
The problem was that Moulton had three-fourths of the answer, but not the final piece of the puzzle.  As Judge Peter Grosscup had noted less than twenty years before, small ownership in America was disappearing rapidly, being replaced with wage system jobs.  The solution — according to Grosscup — was for ordinary people to own corporations, something that G.K. Chesterton also recommended.
But Moulton never considered ownership for some reason.  He knew that for America to produce it needed credit, and to get credit it needed consumer demand, and that the commercial banking system backed up with a central bank could “manufacture” all the credit needed by industry, commerce, and agriculture . . . but — the missing fourth piece of the puzzle — how do you get income (demand) into the hands of consumers?
All Moulton could suggest was to keep prices low to avoid raising wages and increasing costs, and possibly explore profit sharing.  His fatal mistake was to admit that he did not have a specific program to get consumption income to people.
Unfortunately, someone named John Maynard Keynes did.  His solution?
·      Get rid of the gold standard.  As long as a currency is pegged to some objective standard, politicians cannot simply print up the money they want.  This means that the government will not be able to redistribute at will by inflating the currency and manipulating its value.
·      Get rid of small ownership.  Small owners use their ownership income for consumption.  According to Keynes, all ownership income, except what is essential to redistribute to maintain demand and engage in social engineering by making people dependent on the State, must be used to finance new capital to create jobs to furnish people with consumption income.
·      Use the tax system to raise money for investment, and the banking system to create money for government.
·      Socialize the economy by having the State control the rate of investment and the return on investment.
·      Mandate a wage system job as the only means whereby people gain income (cf. Hilaire Belloc's The Servile State).
·      Massive public works to put people to work.
All of these recommendations were, one way or another, embodied in the New Deal so beloved of Msgr. John A. Ryan and other reformers of a socialist bent.  It was, after all, in essence what Jacob Sechler Coxey, the socialist and theosophist who headed up “Coxey’s Army” during the Great Depression of 1893-1894, had demanded.
And what was wrong with the New Deal?
#30#
Posted by Michael D. Greaney at 6:00 AM