There were a number of interesting events this past week, including the CESJ Annual Meeting.  It was scaled down from previous years due to a number of factors beyond anyone’s control, but was still a significant event in the history of CESJ.  A gourmet dinner of tranches de radis brutes et trempette de Roquefort followed with le porc cuit à l'étouffée avec les coeurs d'artichaut sur le riz marron preceded the meeting.  Other items of interest include:
• We learned through the grapevine that His Eminence Gerhard Cardinal Müller, Prefect of the Congregation for the Doctrine of the Faith at the Vatican, is coming to the Arlington Diocese, and will be celebrating Mass in St. Thomas More Cathedral on May 14, 2017.  Cardinal Müller, who is in effect the pope’s theologian, appears to be favorably inclined to the natural law principles underpinning both the Just Third Way and Catholic social teaching.  This reinforces the personal encouragement CESJ received from His Holiness Pope St. John Paul II during a private audience soon after the Presidential Task Force on Project Economic Justice. 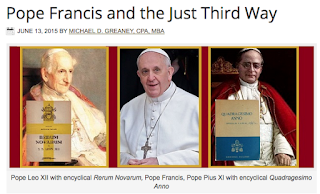 • In a related story, we have an unconfirmed report that an individual or group (we’re not certain which; we’ve requested details) at the Vatican has made a positive reference to CESJ’s article published two years ago in Homiletic and Pastoral Review, “Pope Francis and the Just Third Way.”  According to what we heard — we stress that we have not been able to verify this — someone said that the article is “a great contribution to the Catholic Social Teaching debate.” 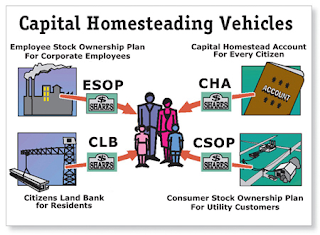 • President Trump’s tax reform plan does not appear to take into account the possibility of corporations being able to avoid all federal and state income taxes . . . if all dividends are made tax deductible at the corporate level, but taxed as regular income at the personal level, with a tax deferral available if used to purchase qualified shares up to a level of capital self-sufficiency, as in Capital Homesteading.  That is, people could purchase up to, say, $1 million worth of newly issued corporate shares on credit on a tax-deferred basis, using the dividends on the shares to pay for the shares.  These new shares would provide financing for new capital formation instead of relying on retaining earnings that should be paid out to stimulate consumer demand naturally instead of by the government issuing debt and inducing inflation to simulate, not stimulate, growth.  Since new jobs rely on new capital formation, and new capital formation relies on consumer demand, allowing corporations to deduct dividends from taxable income provides a way to rebuild the tax base without increasing government debt.
• According to a recent op-ed in the Wall Street Journal, there is no need for Glass-Steagall or similar legislation because the risk in the system is under control.  The problem is that Glass-Steagall was never about risk, but about a well-designed financial system with good internal control, with external control (i.e., government regulations) kept to a minimum as a backup to the internal control.  Clearly the move has been away from control of any kind, internal or external, and toward the sort of laissez faire capitalism that quickly becomes the greatest advertisement for socialism, with the various accommodations between the two systems eventually degenerating into the curious amalgam Hilaire Belloc called “the Servile State,” in which only a tiny élite own or control capital . . . and thus other people. 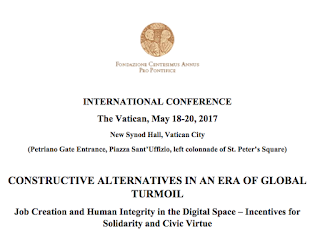 • A faithful reader just sent us a notice and program of a conference on “Constructive Alternatives in an Era of Global Turmoil: Job Creation and Human Integrity in the Digital Space — Incentives for Solidarity and Civic Virtue” to take place May 18-20, 2017.  The lack of a Just Third Way presentation on the program suggests that the conference will have no more effect than other, similar efforts.
• Here’s the usual announcement about the Amazon Smile program, albeit moved to the bottom of the page so you don’t get tired of seeing it.  To participate in the Amazon Smile program for CESJ, go to https://smile.amazon.com/.  Next, sign in to your account.  (If you don’t have an account with Amazon, you can create one by clicking on the tiny little link below the “Sign in using our secure server” button.)  Once you have signed into your account, you need to select CESJ as your charity — and you have to be careful to do it exactly this way: in the space provided for “Or select your own charitable organization” type “Center for Economic and Social Justice Arlington.”  If you type anything else, you will either get no results or more than you want to sift through.  Once you’ve typed (or copied and pasted) “Center for Economic and Social Justice Arlington” into the space provided, hit “Select” — and you will be taken to the Amazon shopping site, all ready to go.
• We have had visitors from 36 different countries and 38 states and provinces in the United States and Canada to this blog over the past week. Most visitors are from the United States, Canada, Australia, the United Kingdom, and Spain. The most popular postings this past week in descending order were “Thomas Hobbes on Private Property,” “Is Greed Good?” “A Just, Third Way: Capital Homesteading, Part II,” “Distributism and Say’s Law,” and “A Just, Third Way: Capital Homesteading, Part I.”
Those are the happenings for this week, at least those that we know about.  If you have an accomplishment that you think should be listed, send us a note about it at mgreaney [at] cesj [dot] org, and we’ll see that it gets into the next “issue.”  If you have a short (250-400 word) comment on a specific posting, please enter your comments in the blog — do not send them to us to post for you.  All comments are moderated, so we’ll see it before it goes up.
#30#
Posted by Michael D. Greaney at 12:01 PM