Own or Be Owned

It is all very well to say that social justice is better than socialism.  We could even come up with a “Top Ten List” of reasons why, and try to make something appallingly serious — the infiltration of socialist principles and the concept of society into virtually every aspect of life — a trifle less ghastly. 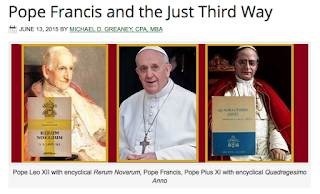 We’ve decided to do better than that, though: an alternative to both capitalism and socialism that has the potential to deliver for everyone what these other systems only promise or restrict to an élite.  This is the Just Third Way, which we define as a free market system that economically empowers all individuals and families through the democratization of money and credit for new production, with universal access to direct ownership of income-producing capital — “capital” being defined as all non-human factors of production.
It is in this definition of the Just Third Way that we begin to realize the importance of private property in capital, and why, e.g., Pope Leo XIII declared, “The law . . . should favor ownership, and its policy should be to induce as many as possible of the people to become owners.” (Rerum Novarum, § 46.)  We can sum it up in one word: power.
·      Not income? 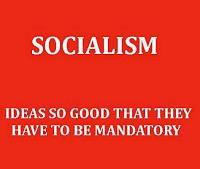 No.  If an adequate and secure income was the exclusive goal of the Just Third Way, we would probably be relegated to supporting such things as Keynesian full employment, Major Douglas’s “social credit,” or any one of the seemingly countless ways people have devised of moving wealth from one person to another without producing anything or getting anything in return, in short, socialism.
·      Not the uplifting of humanity, society, the common good, or any other way of expressing the abstraction of the collective?
Sidebar: this does not refer to the Just Third Way definition of common good, but to the popular notion of aggregate individual wellbeing or general welfare.  Our definition of the common good is the institutional (that is, social) environment within which people carry out the business of living.  Individualists tend to view the Just Third Way definition of the common good as collectivist, while collectivists view it as individualistic.  It is neither, recognizing that human beings are individuals who by nature associate in a social environment, i.e., “political.”  This is what Aristotle meant when he said that man is by nature a political animal. 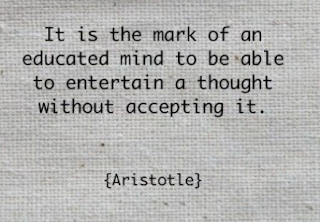 No.  “Humanity” and all those other things and more are abstractions: human intellectual constructs derived from reality, but not existing apart from the human mind.  (For you philosophers, we reject Plato’s theory that ideas have independent existence and human beings go from the general to the particular, and go with Aristotle’s theory that we go from the particular to the general.)  Abstractions are “mental fictions” that enable human beings to deal with the infinite without being overwhelmed.
Socialism, by the way, is inherently Platonic, having the image of an ideal completely separate from individual human reality as the goal toward which to strive.  This can be either “scientific” (atheist) or “religious” (society is God), but both reject individual human dignity and sovereignty. 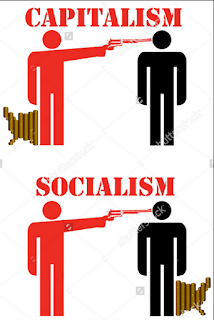 For the general norms of the natural law derived from observations of individual — that is, particular — human nature, scientific socialism asserts the Will of the People as interpreted by the strongest, while religious socialism substitutes the Will of God . . . as interpreted by the strongest.  Might makes right in both cases, and individuals are stripped of all power.  Both scientific and religious socialism end up eliminating God as God, and put Collective Man at the center as the new deity.
Nor is capitalism much better.  As far as the propertyless individual is concerned, whether capital ownership is concentrated in the hands of a private sector élite (capitalism), or a State bureaucracy (socialism), he is still stuck with wages and welfare as the sole source of income.  In plain terms, anyone without ownership is dependent on a powerful private sector élite for wages, or a powerful public sector élite for welfare.
The Just Third Way is only after power.
Not power over others.  Capitalism and socialism are systems built on the ability to control others.  We have seen (and lived in) that future, and it doesn’t work.
No, the Just Third Way seeks to empower each and every individual with power over his or her own life, thereby enabling each person to acquire and develop virtue and become more fully human.
And how do we propose to do that?  By making it possible for as many as possible of the people to become capital owners.
Why?
Because, as Daniel Webster pointed out nearly two centuries ago, “Power naturally and necessarily follows property.”  If you want control over your own life, you had better own capital, or you are dependent on someone who does.  As William Cobbett commented at about the same time as Webster,
Freedom is not an empty sound; it is not an abstract idea; it is not a thing that nobody can feel. It means, — and it means nothing else, — the full and quiet enjoyment of your own property. If you have not this, if this be not well secured to you, you may call yourself what you will, but you are a slave.
It all boils down to a simple choice: Own, or be owned.
#30#
Posted by Michael D. Greaney at 6:00 AM