Yesterday we looked at how, under Say’s Law of Markets — everything else being equal — every producer is a consumer, and every consumer is a producer.  Thus, as Say’s Law is often (if somewhat inaccurately) summarized, “supply (production) generates its own demand (consumption), and demand its own supply.” 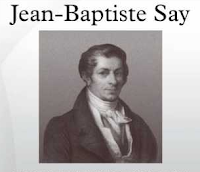