There’s a Better Way, Mister Trump, I: What Is

If this were a religious blog, today we’d be gushing about how the original Saint Nick got a rep as a real bad-ass dude by slapping down Bishop Arius for asserting that the Son was similar, but not the same as the Father (the original lump of coal in the stocking for bad boys and girls was a fat lip for spouting what Bishop Nicholas of Myra thought was drivel), and how the tradition of gift-giving got associated with him (and maybe even how he became the patron saint of pawnbrokers).
This isn’t a religious blog; it’s about the whole of human society, and so we reserve the right to talk about anything human, whether it pertains to civil society (the State), domestic society (the Family), or even — gasp — religious society (the Church) . . . okay, to be strictly accurate, that last should be “Church/Synagogue/Temple/Mosque/Shrine, etc., etc., etc.,” but let’s get real.  The language is (almost) always “Church and State” when talking about religion, even if there’s not a single church involved.
What we’re looking at today is related to the tradition of gift giving associated with Ol’ Saint Nick, but applied to a modern situation.  Specifically, it’s president-elect Trump’s actions with respect to the Carrier and Rexnord corporations.  Take the gift of the bundle of incentives for not moving jobs out of the United States, and you won’t get a lump of coal or a switch from Black Peter in the form of high tariffs and other unspecified punishments.
First off, there’s the slight shift in the whole idea of gift giving.  A series of memes that you’ll probably see a lot of today show a picture of Santa Claus or an icon of Saint Nicholas (the same name, really; just run “Saint Nicholas” together really fast and say it with a Dutch accent and you get “Santa Claus”) that say “I came to give presents to good little children and punch heretics in the mouth . . . and I’m all out of presents. . . .”
Bottom line: those kind of gifts are supposed to be rewards for being or doing good, or something you would get just for being you, not incentives to tempt people to be or do good.  Good (virtue) is supposed to be done for its own sake, or it isn’t really virtuous, although a lot of good may result.
Enough of moral philosophy.  The issue here is that Trump is justifiably worried about job loss.  Jobs are still the way that most people are “supposed” to gain income.  If people don’t have jobs, they don’t have income, and somebody else (e.g., the U.S. taxpayer) ends up supporting them.  From the “jobs perspective” it makes perfect sense to balance the cost of incentives to keep a company in operation inside the U.S. against the cost of welfare for workers who lose their jobs.
The problem is that costs of labor keep rising, and demand for goods and services isn’t exactly blowing the lid off of the U.S. economy.  Most — if not all — of the so-called growth is in the stock market and expansion of government, neither one of which produces anything you can eat, wear, or cook and warm yourself with.
Besides, it’s undignified for a U.S. president to bully and threaten.  Sure, they do it.  They also scold and shake fingers, and all sorts of other things . . . but is that really presidential?  And is there a better way to keep jobs in the U.S.?
Sure there is.  It’s even in current law.  It’s one of the greatest incentives you can offer a for-profit organization engaged in the production of marketable goods and services: no state or federal corporate income taxes. 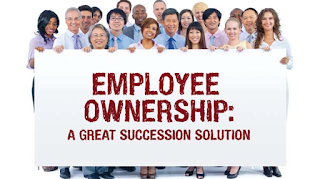 Specifically, if a company is 100% owned by the workers through an ESOP trust and takes the S-Corp election, the company pays no state or federal corporate income taxes, which can increase the bottom line by as much as half.  If it also institutes some form of participatory management and profit sharing, findings by the National Center for Employee Ownership in Oakland, California suggest that profitability increases by another half.  That’s a potential doubling of profits just by becoming worker-owned and treating workers like real people and partners instead of disposable labor.  There’s also a way to decrease fixed labor cost by shifting a portion to profit-sharing instead of wages.  And — believe it or not, something also possible under current law — the Federal Reserve now has the power to create money interest free (but not cost free) that the workers can use to purchase the company and repay the financing on favorable terms.
But what’s in it for the former owner(s)?  Plenty.  They get the price of the company that they can take and invest elsewhere . . . like in a parent company or building a subsidiary that creates jobs instead of taking them away.
Now, there is a downside to this for the current owners.  They can’t get a tax deferral on any gain from selling an S-Corp to the workers through an ESOP.  That only applies to a sale of a C-Corp to the workers through an ESOP.  It’s called a “Section 1042 Deferral” and it’s only available to owners who sell to a C-Corp ESOP, not an S-Corp ESOP.
Is that really a problem?  Not really.  The owners can sell to a C-Corp ESOP, take the deferral, invest it in replacement securities, and the company can shift to an S-Corp ESOP as soon as the law allows.  Of course, it would be easier if the 1042 treatment was extended to S-Corps as well as C-Corps, but we’re looking at what is, not what should be.
And what should be?
That’s what we’ll look at tomorrow.
#30#
Posted by Michael D. Greaney at 6:00 AM