The Purpose of Production Revisited

A little over four years ago (on December 13, 2012, to be exact), we whipped out a quickie posting on the purpose of production in real life, versus the purpose of production in the economics of John Maynard Keynes.  As the introduction to the link to the posting on FaceBook was just a trifle long but substantive, and the posting has proved one of the most popular on the blog, we decided to repost it with a few additions.  After all, one reader, J.C. (not that one), recently commented on this particular posting,
Lol, can’t make too much sense now can we? 😉 People will come around, all in God’s time. Thanks for opening my eyes by the way and your thoughtful answers to all my questions. When I first started learning about this stuff I was angry. Angry that people lied to me, angry at myself for being deceived, angry that people are still being deceived. Now I’ve come to understand, at least in a small way, why “these things must come to pass.” Matthew 24:6 And now, when the tides turn we will have these wonderful well researched books you’ve given to humanity!
Disclaimer for Religious Folks with a Territorial Imperative for Their Faith and Who Jettison Reason: Now, we’re not a Catholic group, or even a religious organization.  We just happen to use a lot of Catholic social teaching in what we’re doing because 1) it’s based on the natural law common to every human being, and 2) it agrees in principle (and most of its applications) with the Just Third Way.  If something is true, it’s not just true for some of the people, it’s true for all the people.  Don’t shut non-Catholics off from Catholic social teaching.
So, having made that disclaimer, we begin by noting that back in 1891, Pope Leo XIII said something so obvious that many people — especially economists — have managed to ignore it completely:
It is surely undeniable that, when a man engages in remunerative labor, the impelling reason and motive of his work is to obtain property, and thereafter to hold it as his very own. If one man hires out to another his strength or skill, he does so for the purpose of receiving in return what is necessary for the satisfaction of his needs; he therefore expressly intends to acquire a right full and real, not only to the remuneration, but also to the disposal of such remuneration, just as he pleases. (Rerum Novarum, § 5)

If you know anything about binary economics (or just plain common sense), that passage is going to give you a sense of “déjà vu all over again.”  Why?  Because it’s a fancy way of (re)stating the first principle of economics.  This, as Adam Smith put it a trifle more succinctly, is, “Consumption is the sole end and purpose of all production.”
Fancy that.  The pope 😇 and Adam Smith 😠 agree on something.  Next thing you know, the pope 😇 and Karl Marx 😈 will agree . . . oh, wait.  They already do, on the definition of socialism: “the abolition of private property.”
Now, however, things get a little sticky. 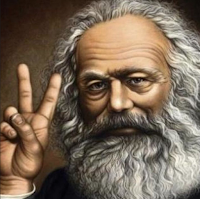 To the modern economic mind, shaped in large measure by the thought of the Great Defunct Economist, John Maynard Keynes, the purpose of production (at least by capital . . . which Keynes denied was independently productive) is not consumption.  Nope.  The purpose of production from capital is not consumption, but reinvestment.  Reinvesting the earnings of capital will finance new capital formation, which will create pretend jobs to siphon off what capital produces for the benefit of non-productive labor.
Of course, as Louis O. Kelso pointed out, if labor is becoming less productive, and capital is becoming more productive, the obvious thing to do is to open up the means whereby owners of labor can also become owners of the capital that is displacing their labor.  As Kelso said in an interview in Life magazine in 1964, “If the machine wants our jobs, let’s buy it.”  He meant the machine, not the farm.
Keynes, however, didn’t think that way. No, since (according to Keynes) labor is the only thing that is truly productive, then, except for what is needed for reinvestment and to encourage owners of savings to reinvest their savings in new capital, everything belongs to labor.
Keynes’s program, however, comes into direct conflict with Catholic social teaching, which insists that owners of capital have as much right to the fruits of ownership as the owners of labor — and vice versa.  As Pope Pius XI explained,
[I]t is wholly false to ascribe to property alone or to labor alone whatever has been obtained through the combined effort of both, and it is wholly unjust for either, denying the efficacy of the other, to arrogate to itself whatever has been produced (Quadragesimo Anno, § 53.)
Evidently there are some problems with Keynesian thought, at least from the perspective of Catholic social teaching . . . and thus for Catholics and others who rely on Catholic social teaching to guide them in coming up with a just approach to establishing and maintaining an economy that works for everybody, not just a private sector élite (capitalism) or public sector bureaucracy (socialism). The biggest problem is how to get economists and politicians to see that maybe things aren’t quite as Keynes believed.
If we can produce a blog on that subject for your consumption, we’ll post it tomorrow.
#30#
Posted by Michael D. Greaney at 6:00 AM