On Monday of this week we opined that, while Sister Lioba Zahn, O.S.B. of the Mariendonk Abbey in Germany seemed to be doing good by doing well as a day trader in the stock market, things are not as they seem, especially in the rather schizophrenic global financial system.  While her activities are directed at generating essential funds for the Abbey (not all of them are able to provide the stuff of hit musicals), the end does not justify the means.
Does that mean that Sister Lioba is sinning mightily, and is on the fast track to aitch-ee-double-toothpick?  No, it doesn’t mean that, either.  You see, doing the best you can with whatever you have while trapped in an unjustly structured system can be endured (at least for a time), but is not something that should be tolerated for one moment longer than need be.
The danger, of course, is that if people trapped in the unjust system think that what they are doing is not merely tolerable, but what they should be doing, or (if they see no way out of the situation), they will not bother with trying to figure out how to go from merely tolerable to that which is truly virtuous.  Yet that is the very thing the act of social justice is designed to fix: transforming flawed or barely tolerable institutions (“structures of injustice”), to properly designed institutions or social tools (“structures of justice”), but without harming anyone’s interests. 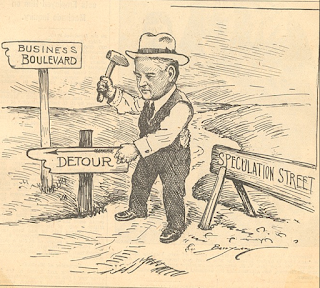 The issue here, then, is not merely making a profit.  We covered that on Monday, and determined that making a profit is a good thing.
No, the real issue here is how you make a profit.  Both the end and the means must be “virtuous” — consistent with human nature . . . that’s what “virtue” literally means: “human-ness.”  The end does not justify the means, any more than the means justify the end.  Both means and end have to be compatible and on track.
This brings in the question of the difference between true investment and speculation.  We define investment as resources put into a project with the intention of providing marketable goods and services.  Hopefully, whatever good or service provided can be sold at a price higher than the full cost of providing it, and the profit (the difference between the price and the cost) will be sufficient to compensate those involved for all their time and trouble.
Viewed that way, profit is not the bonus or reward someone gets for doing something useful, but the ordinary compensation due.  Profit is not something extra or surplus, but an essential part of production and consumption, whether on an individual basis or throughout the world.  If something does not somehow yield a profit, there is no reason to do it, at least in economic terms and keeping everything else equal.
Speculation, on the other hand, is activity intended to generate a profit from the change in the value of something on the market.  No good or service is produced, and therefore no profit is due in justice — with a big qualification: no profit is due if someone engaged in speculation in order to make a profit. 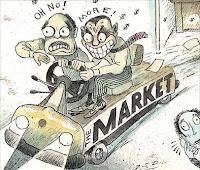 This does not mean that making a profit on a change in the value of something is always unjust.  Why?  Because it’s not always speculation.  A farmer or merchant who realizes a greater profit from something he had in inventory anyway does nothing wrong.  That’s because the extra profit was not intended . . . nice, but not why inventory was held.  It was held for resale or warehoused for future use, not with the intent of hoping the price would increase or (worse) holding goods off the market to try and force the price up in order to make a profit.  It was a windfall.
So, is Sister Lioba doing wrong because she’s speculating instead of really investing?
Well . . . no.  This is where “the principle of double effect” comes in.  This principle says it’s okay to do something that is ordinarily wrong if it is not “objectively evil” (i.e., inherently wrong), any evil is not intended (i.e., you’re not doing something in order to get the evil result), and the intended good that results outweighs the unintended evil.
Taking a profit from the change in the value of something is not always evil, so it is not “objectively evil.”  The financial system is set up today so that making money from investing is, frankly, virtually impossible without speculating.  That’s just the way the system works (and we’ll spare you all the reasons things developed this way).  The good sister is engaging in day trading to make enough money for the Abbey to remain solvent, which is the good that outweighs the unintended evil of dealing with the existing system — without which the good of keeping the Abbey solvent wouldn’t be possible.
So it’s okay for Sister Lioba to keep on doing what she’s doing because she has no choice, and it’s not objectively evil?
Well . . . no.  There’s one additional condition for the principle of double effect: the act of social justice.
You cannot leave things as they are if the institutions you’re using (in this case the financial system) are flawed and either encourage or even actively require injustice.  You must organize with others and change the institutional environment so it operates justly and you (and others) can make money investing without violating justice.
And with luck, we’ll look at that on Monday.
#30#
Posted by Michael D. Greaney at 6:00 AM