Tuesday, November 29, 2016 was designated “National Day of Action to Fight for $15,” meaning an across the board hike in the minimum wage to $15.00 per hour throughout the United States.  Many workers at McDonald’s restaurants walked off the job and participated in protests, with “dozens” being arrested in various demonstrations across the country, according to an Associated Press Report.
Earlier, McDonald’s Corporation had announced a nationwide program to replace human workers with self-service kiosks.  Ed Rensi, McDonald’s former president and CEO of McDonald’s U.S..A., analyzed the effects of the push for an increase in the minimum wage — and the picture is not pretty:
In 2013, when the Fight for $15 was still in its growth stage, I and others warned that union demands for a much higher minimum wage would force businesses with small profit margins to replace full-service employees with costly investments in self-service alternatives. . . . It’s not just McDonald’s that has embraced job-replacing technology. Numerous restaurant chains (both quick service and full service) have looked to computer tablets as a solution for rising labor costs. . . . Eatsa, a fully-automated restaurant concept, now has five locations — all in cities or states that have embraced a $15 minimum wage. . . . the Starship delivery robot is now navigating the streets of San Francisco with groceries and other consumer goods.  The company’s founder pointed to a rising minimum wage as a key factor driving the growth of his automated delivery business.
This is bad enough.  People who once had an inadequate income now face the possibility of having no income (assuming everything else stays the same, of course, as the rest of this analysis does).  What Mr. Rensi and others on the producer side don’t see, however, is the real significance of replacing wage workers with technology. 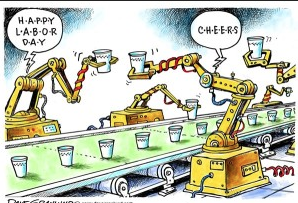 Yes, they understand that technology is expensive.  Some companies may be forced out of business because they can’t afford the investment in the new technology to replace the human labor that they also can’t afford.
It’s not just a matter of raising prices.  “Price” is not a function of the cost of production to the seller, but of the value of a product’s utility to the consumer.  The importance of price to a seller is that what he or she can charge for a product must cover the costs of production and a reasonable profit, or it will not pay the seller to supply the product to the consumer.
Yes, a smart seller will price a product at the point of profit maximization — which does not necessarily mean at the highest price.  The just market price of a product is not equal to the costs of production, but to the value of the consumer’s utility.
A McDonald’s quarter pound burger at $4 may be useful to the consumer, while the same sandwich at $6 is not, especially if ground beef is $4 per pound.  A smart consumer may decide that the convenience of a McDonald’s sandwich isn’t worth it when four times as much beef, bun, and fixings can be had for the same or lower cost.
The real problem for business, however, is the same as that for the replaced workers: no income with which to buy the product.  Ronald Reagan related an anecdote about labor statesman Walter Reuther, president of the United Auto Workers: 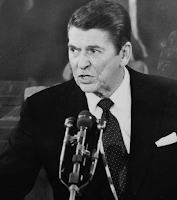 Some years ago a top Ford official was showing the late Walter Reuther through the very automated plant in Cleveland, Ohio and he said to him jokingly, “Walter, you’ll have a hard time collecting union dues from these machines and Walter said, “you are going to have more trouble trying to sell automobiles to them.”  Both of them let it stop there.  There was a logical answer to that . . . the owners of the machines could buy automobiles and if you increase the number of owners you increase the number of consumers.
Over hundred years ago Abraham Lincoln signed the Homestead Act.  There was wide distribution of land and they didn’t confiscate anyone’s privately owned land. . . . We need an industrial Homestead Act.  (Speech to Young Americans for Freedom, July 20, 1974.)
The implied lesson was ignored.  Unions continued to push for higher fixed wages and benefits . . . and U.S. automakers either installed robots or shipped jobs to lower-wage countries.  Detroit went from being a prosperous city in the heart of industrial America, to the poster child for urban dissolution.  Detroit hasn’t merely decayed, it has decomposed, rotting from the inside out.
Contrary to Reagan’s statement, however, Reuther didn’t let it stop there.  As he testified before Congress shortly before he was killed in an airplane crash, 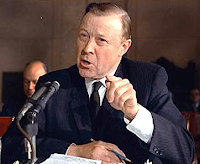 Profit sharing in the form of stock distributions to workers would help to democratize the ownership of America’s vast corporate wealth which is today appallingly undemocratic and unhealthy.  The Federal Reserve Board recently published data from which it is possible to estimate the degree of concentration in the ownership of publicly traded stock held by individuals and families as of December 1962. Preliminary analysis of these data indicates that, despite all the talk of a “people’s capitalism” in the United States, little more than one percent of all consumer units owned approximately 70 percent of all such stock.  Fewer than 8 percent of all consumer units owned approximately 97 percent—which means, conversely, that the total direct ownership interest of more than 92 percent of America’s consumer units in the corporation-operated productive wealth of this country was approximately 3 percent.  Profit sharing in a form that would help to correct this shocking maldistribution would be highly desirable for that reason alone.… If workers had definite assurance of equitable shares in the profits of the corporations that employ them, they would see less need to seek an equitable balance between their gains and soaring profits through augmented increases in basic wage rates. This would be a desirable result from the standpoint of stabilization policy because profit sharing does not increase costs. Since profits are a residual, after all costs have been met, and since their size is not determinable until after customers have paid the prices charged for the firm’s products, profit sharing as such cannot be said to have any inflationary impact upon costs and prices. (Testimony before the Joint Economic Committee of Congress on the President’s Economic Report, February 20, 1967.)
A detailed proposal that would address the concerns of both workers and business owners (by turning workers into owners . . . .) can be found in the Capital Homesteading proposal of the Center for Economic and Social Justice (CESJ).
#30#
Posted by Michael D. Greaney at 6:00 AM