What’s Wrong With This Story?, I: Is Profit Evil?

Last week the Wall Street Journal carried one of its more or less cute human interest stories.  You know, the ones that appear on the front page and tell you more than you really want to know about turtle ranching in Tasmania, the world’s champion string collector, or the most prolific novelist in history — “Corin Tellado,” pen name of Maria del Socorro Tellado Lopez (1927-2009), with more than 4,000 (not a typo) novels, and total sales of over 400 million.  Most prolific living novelist? Japanese-Brazilian Ryoki Inoue, with more than 1,100 novels to his credit, having turned out as many as three in one day.
Or, more to the point, Germany’s Sister Lioba Zahn, O.S.B. (Benedictine, so the use of “nun” in the article was accurate), who has become a stock trader to make up for the historic Mariendonk Abbey’s fall in investment income when the European Central Bank cut interest rates in an effort to stimulate economic growth.  (That’s another posting.)  With interest on their savings low, and the roof leaking, the nuns had to figure out a way to increase income from investments, as the market for their vestments (no, really), milk, and candles was pretty much saturated (and they don’t sell too many sets of vestments in a year, anyway).
Sister Lioba, Die Cellerarin — “Sister Cellarer,” a Cellarer being a CFO for an institution, originally someone in charge of the cellar and keeping it stocked with food and drink — took the bit between her teeth and taught herself day trading.  Overall, the Abbey’s portfolio has averaged a 2.6% annual return since she started, which is certainly much better than the negative interest, -0.4%, the current rate the banks are giving.
So, what’s wrong with that?
Well, do you mean “wrong” as in “objectively evil,” or “subjectively evil”?  If day trading is objectively evil, everything.  No one is permitted to do anything objectively evil, not even to gain the greatest good.  For example, the central event in Christianity is the Crucifixion of Jesus of Nazareth, something that Christians believe redeemed the entire human race from the slavery of sin and a bunch of other really good things.
Does that mean that the ones who engineered the Crucifixion did a really good thing?  Hardly.  Christians believe that the suggestion of the High Priest Caiaphas that it was better one person should suffer than that they lose their privileged position, sorry, that the nation perish not (John 11:49-50) ranks pretty high up on the list of Worst Crimes in History, possibly making it into the top three.  Condemning or killing someone for something he or she didn’t do to gain some advantage for yourself, no matter how great, is “objectively evil.”
Is day trading objectively evil?
No way.  Making a profit is a good thing.  Many people are amazed, for example, how often Jesus Himself used commercial terms and examples in His parables and other teachings.  The people who listened to Him would know instantly what He was talking about, since they did that kind of thing every day.
People who made a profit were even considered especially favored by God, and the bigger the profit, the more favored you must be . . . with two exceptions.  First (obviously), the profit had to be honest profit.  No cheating, lying, double dealing, false weights and measures, altering contracts, etc.  No, deal honestly, and you will reap the profit: “Give, and it will be given to you.  A good measure, pressed down, shaken together and running over, will be poured into your lap. For with the measure you use, it will be measured to you.” (Luke 6:38.)
Profit objectively evil?  Don’t make us laugh.
The other exception?  Don’t let material wealth get in the way of what is really important.  In fact, don’t let anything get in the way of what is really important, which in Jesus’s teachings means getting to Heaven.  As He said (and try to be objective and realize just how graphic the language is, e.g., gouge out your eye rather than let it get in the way of getting to Heaven),
Woe to the world because of scandals.  For it must needs be that scandals come:  but nevertheless woe to that man by whom the scandal cometh.  And if thy hand, or thy foot, scandalize thee, cut it off, and cast it from thee.  It is better for thee to go into life maimed or lame, than having two hands or two feet, to be cast into everlasting fire.  Scandalize thee. . .That is, cause thee to offend.  And if thine eye scandalize thee, pluck it out, and cast it from thee.  It is better for thee having one eye to enter into life, than having two eyes to be cast into hell fire.  (Matthew 18:7-9.)
And now you know the meaning of that whole thing about a rich man getting into Heaven is like trying to thread a camel through the eye of a needle.  Was Jesus saying that the rich are inherently evil or some such thing?  No, because that would imply that some human beings are made in the image and likeness of God . . . but others are not . . . unless you want to say that God is both all-good and all-evil, and see how far that gets you in a debate with anyone with common sense. 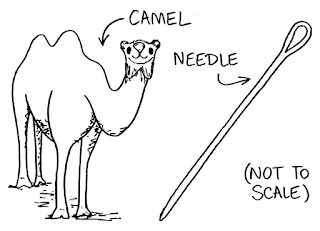 No, Jesus’s point was not that rich people are inherently evil, or that wealth or profit is bad, or that He was talking about a gate into Jerusalem that is hard for a camel to get through.  That bit was an ex post facto legend that grew up as a result of preachers not wanting to tick off the people who contributed lots of money and paid their salaries.
Jesus was saying that the rich have so many more temptations than the poor about letting the good things of the earth get in the way of the good things of Heaven that, without God’s grace, the rich can pretty much forget it . . . hence the shock the Apostles expressed and their astonishment on hearing that the rich, who were presumably assured of being first in line for God’s favor, were actually first in line to lose that favor if they didn’t fling themselves on God’s mercy and start living right.
So that means Sister Lioba is doing okay, then . . . right?  Who is living righter than a nun in a convent?  And in Germany?  How much more Sound of Music can you get?  (Okay, that takes place in Austria, but let’s not quibble.)  Day trading must be A-Okay (oder “Alles ordnung” in die Muttersprache).
Wrong.  And we’ll start looking into why tomorrow.  If another, more interesting or critical subject doesn't pop up in the interim.
#30#
Posted by Michael D. Greaney at 6:00 AM