This week we have a number of news items relating to the great Keynesian economic illusion that government creates wealth by issuing debt, and that inflation is essential to economic growth.  Neither assumption is correct and is easily disproved, but you can’t seem to get today’s academics or politicians to understand that:


• The Frontier Thesis. On Monday we posted a video about the Homestead Act, although it was difficult finding something that didn’t distort matters too much.  Frankly, we need a series of videos explaining things like the Homestead Act of 1862 from a Just Third Way perspective, but lack the people needed to carry out a project like that . . . any volunteers?  If you’re a student or group of students who need a subject for a video for a class project, we might be able to help you out.  We are following up this coming Monday with a video on Frederick Jackson Turner’s 1893 “Frontier Thesis,” which seems to have come in for even more ridicule and debunking than Lincoln’s Homestead Act.  It was difficult to find a video that didn’t start to preach, and the one we found was no exception, although it did keep it to a minimum.  Another video project, anyone?  Why is Turner’s Frontier Thesis important?  Because part of it was his contention that the end of “free” land under the Homestead Act meant the end of American-style democracy, which Kelso and Adler made the point of their 1958 collaboration, The Capitalist Manifesto. 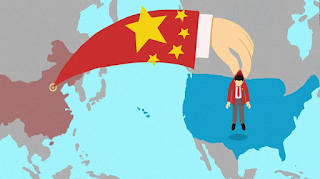 • They Might Be Giants?  Dr. Charles M. Lieber, a Harvard University professor — literally, he is a “University Professor,” the highest possible academic rank — has been arrested for failing to disclose $1.5 million in payments from the Chinese.  He received the money for what has been described as “not important” work, which has baffled everyone as to why someone of his stature in the rarified atmosphere of one of the most Hallowed Halls of Ivy would take the cash, particularly when he has generated more than ten times that amount in legitimate grants.  Dr. Lieber has been placed on indefinite administrative leave and has also been charged with one felony count of making false statements to U.S. government agencies.  He faces a possible six months in prison and blacklisting for all future government grants.  The story seems incredible, unless (as is often the case in such scandals) there is more to the story than is being revealed.  As far as the Just Third Way is concerned, it underscores the unhealthy atmosphere of much of modern Academia and the need for something along the lines of “Justice University.”
• Chinese Danger Signs.  People are rightfully worried about the Chinese economy and the aggressive policies being followed by the leadership of the Democratic Peoples Republic.  There are, however, a number of danger signs that even the Chinese are ignoring or even considering as strengths that should worry everyone even more than they are.  1) China’s exports account for 40% of GDP.  At the same time, China is doing its very best to undermine the ability of other economies to produce and thus purchase Chinese products.  As Jean-Baptiste Say pointed out over two centuries ago, if you want to sell more, other people must produce so that they can buy your products.  We do not purchase what others produce with “money” per se, but with what we produce.  If both parties in a transaction are not productive, then trade cannot be sustained . . . regardless what John Maynard Keynes believed.  2) China has 40 million unemployed.  For comparison, Canada has 38 million people total.  At the same time, China is also pillaging developing countries for raw materials, and selling those countries manufactured goods those countries should be making themselves with their own raw materials.  This is pure mercantilism, which people like Adam Smith condemned.  Even then, British mercantilism only worked because the benefits went to the majority of British citizens, not to a Party élite; they built at least minimal consumption power into their own citizens . . . which the Chinese are not doing.  Given that (as Smith pointed out in The Wealth of Nations) “Consumption is the sole end and purpose of production,” just as you cannot consume without something having been produced, you can’t continue producing if you can sell what you produce to consumers . . . which you can’t do if those consumers aren’t producing.  3) China is boosting its GDP by padding its capital accounts by building infrastructure that ends up either not being used, or being torn down to be rebuilt to pad the capital accounts further.  This is paid for by issuing government debt, which (since the projects it finances are not self-liquidating) must be redeemed by increasing exports . . . and the level of exports cannot be increased, much less sustained if at one and the same time they are undermining other countries’ capacity to produce and thus purchase and consume China’s products.
• Deficits and a Strong Economy?  According to the Washington Post of January 29, 2020 (page A-17), “U.S. Deficit Projected to Eclipse $1 trillion in 2020, Despite Strong Economy.”  “Strong economy” is (as we saw in the above item on Chinese danger signs) a rather vague term, and usually means only what academics (see the above item for the reliability of leaders in Academia), politicians (not typically a “reliable source”), and the media (need we say more?) want it to mean.  Evidently, in this instance, “strong economy” means an overblown stock market and low unemployment, both financed by increased government debt in the Keynesian belief that you can spend your way into prosperity, instead of following the more rational approach of producing your way to prosperity.  The Wall Street Journal agreed in two articles on January 31, 2020, “Economy Still Solid, But Slowed Last Year” (A-1, A-2), and “2% Growth Is Here to Stay” (B-14).  The fixed idea that you need an increase in government debt and inflation to finance growth is a Keynesian illusion that stifles real growth and sets an economy up for a crash that would dwarf the Great Depressions of 1873-1878, 1893-1898, and 1930-1940 (twice as long as the prior two Great Depressions due to implementing Keynes’s prescriptions, which only entry into World War II resolved).

• Lunch On.  NHK World, the Japanese public television station, has a program titled “Lunch On,” in which a television crew goes around to various companies and investigates what people have for lunch.  This is a lot more interesting than it sounds, and they also give a profile of the companies and the people in them.  On January 30, 2020, the show featured a secondhand building supply firm in which the owners pay their employees very high wages as a way of sharing the company’s profitability and giving them an incentive.  Of course, they mentioned that it was sometimes difficult to get enough business all the time to meet the high costs, but it was worth it.  No one seemed to consider the possibility of sharing ownership and risk, and taking the bulk of compensation out of variable profits instead of fixed compensation.
• Shop online and support CESJ’s work! Did you know that by making your purchases through the Amazon Smile program, Amazon will make a contribution to CESJ? Here’s how: First, go to https://smile.amazon.com/.  Next, sign in to your Amazon account.  (If you don’t have an account with Amazon, you can create one by clicking on the tiny little link below the “Sign in using our secure server” button.)  Once you have signed into your account, you need to select CESJ as your charity — and you have to be careful to do it exactly this way: in the space provided for “Or select your own charitable organization” type “Center for Economic and Social Justice Arlington.”  If you type anything else, you will either get no results or more than you want to sift through.  Once you’ve typed (or copied and pasted) “Center for Economic and Social Justice Arlington” into the space provided, hit “Select” — and you will be taken to the Amazon shopping site, all ready to go.
• Blog Readership.  We have had visitors from 32 different countries and 38 states and provinces in the United States and Canada to this blog over the past week. Most visitors are from the United States, Spain, India, , Canada, and the Philippines.  The most popular postings this past week in descending order were “Part I: Is the Just Third Way Communist?” “Who Owns Social Security?” “The Homestead Act of 1862,” “Part II: Is the Just Third Way Communist?” and “Part 2½: What About the Universal Basic Income?”
Those are the happenings for this week, at least those that we know about.  If you have an accomplishment that you think should be listed, send us a note about it at mgreaney [at] cesj [dot] org, and we’ll see that it gets into the next “issue.”  Due to imprudent language on the part of some commentators, we removed temptation and disabled comments.
#30#