It’s an absolute dogma of modern politics and economics.  Everyone has the right to what they need to live a decent life.  If people do not have what they need to do so, it is the responsibility of the State to see that they do, and all efforts are to be directed to the end of providing people with what they need.


Of course, there are some disputes as to the definitions of necessity and decency.  By and large, however, modern politics and economics takes for granted the goal of “the New Christianity” as articulated by Claude-Henri de Rouvroy, comte de Saint-Simon (1760-1825), that,
. . . [t]he whole of society ought to strive towards the amelioration of the moral and physical existence of the poorest class; society ought to organize itself in the way best adapted for attaining this end. (“Saint-Simon,” Encyclopedia Britannica, 19: 14th Edition, 1956, Print.)
Evidently unnoticed by virtually everyone is the assumption that people are due what they need completely changes what it means to be a human being.  It shifts the meaning and purpose of life from becoming more fully human — acquiring and developing virtue or “humanness” — to becoming more fully animal, that is, meeting material needs as the sole end of existence.
Most obviously — once you realize that there has been a change and of what that change consists — assuming that the State has the principal responsibility for the welfare of its citizens automatically means that every citizen is ipso facto a dependent of the State.  Politically, this means that the State is in charge and creates persons; persons are not in charge and create the State.  Everyone whom the State permits to exist becomes by that fact alone “a mere creature of the State.” (Pierce v. the Society of Sisters, 1925). 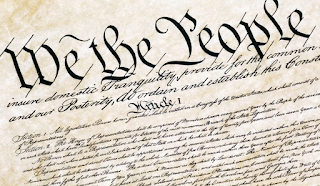 This, however, is the exact opposite of what is clearly stated in the Preamble to the U.S. Constitution:
We the People of the United States, in Order to form a more perfect Union, establish Justice, insure domestic Tranquility, provide for the common defence, promote the general Welfare, and secure the Blessings of Liberty to ourselves and our Posterity, do ordain and establish this Constitution for the United States of America.
The obvious and unmistakable meaning of the Preamble is that “We the People” form the State.  The State does not form us.  Rights come from human beings, not from an abstraction.
“But,” you say, “don’t all rights come from God?  Can’t God vest rights in individuals or in humanity as a whole as He pleases?”
No.  Going by pure logic and not by any religious belief, given that “God” exists and is defined as a “perfect Being,” omnipotent and omniscient, God’s omnipotence extends only to those things that do not contradict any part of what defines God as a perfect Being.  For example, people who think they are being clever like to put forward the proposition that they think disproves God’s existence: “If God can do anything, then He can make a weight so heavy He can’t life it.”
The statement is nonsense, because it violates reason, that is, it assumes that “if” God exists, then He can both “be” and “not be”, i.e., both do something and not do something at the same time under the same conditions.  It also violates reason by assuming as a given that the statement proves God doesn’t exist, that is, it assumes you can logically prove the existence of non-existence.
Thus, the statement that God can do anything really means that He can do anything that does not contradict His nature as a perfect Being.  To make any other claim does not make sense; it is neither true nor false, but nonsense.
The bottom line here is that God grants rights only to actual human beings as human beings.  Abstractions such as the collective, the State, or individuals or groups in their official capacities have rights only by delegation from human beings as human beings.
The implications of this are profound.  Because human beings as human beings have rights by nature and not by delegation, all human beings at every stage of development are “natural persons.”  The only way a natural person can justly be deprived of a natural right such as life, liberty, or private property is for just cause and through due process by duly constituted authority.  No one can be justly deprived of a right when he or she has committed no offense, for something he or she might do, or for expedience or convenience of others.
“Person,” in fact, signifies “that which has rights.”  When you take rights away from someone or something without following due process and without just cause (and redefining justice does not constitute “just cause”!), you have “depersonalized” that someone or something.  Similarly, if you claim that human beings receive rights from the State and not the other way around, you have made personality contingent upon something other than mere humanity.  This effectively overthrows God, putting whatever you claim as the ultimate source of rights in God’s place.
And that’s just the beginning, as we will see when we look at this subject again.
#30#