A Tale of Two Machines, II: The McCormick Reaper

As we saw in the previous posting on this subject, the invention of the cotton gin revolutionized cotton production and, in a horrifying twist of fate, revived what to all appearances was a dying institution at the end of the eighteenth century: human chattel slavery.  Cotton was now phenomenally profitable as the world’s leading fiber, cheap, durable, and economical to produce . . . if you ignored the fact that it provided an excuse to enslave millions of human beings and wore out land at a tremendous rate.  When money talks, human dignity walks. 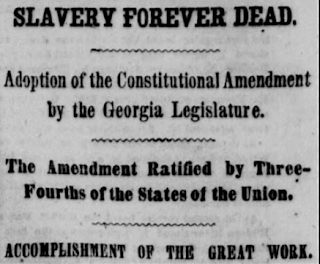 Following the American Civil War and the adoption of the Thirteenth Amendment abolishing chattel slavery, however, agriculture in the United States underwent a profound shift.  Cotton maintained its primacy of place in the volume of exports, but it started to slip in competition with other agricultural and manufactured products as well as production in other countries.
In addition, by the late nineteenth and early twentieth centuries, production was impeded by the infestation of the boll weevil that made inroads on production.  The year 1937 was the last year in King Cotton’s unbroken reign from 1803.
Wheat had gradually displaced cotton’s preeminence in agriculture, largely as a result of the 1862 Homestead Act.  Where cotton was labor intensive, especially at harvest once the cotton gin removed the processing bottleneck, wheat was “natural capital (land) intensive” except for harvest, once its own harvesting bottleneck was removed. 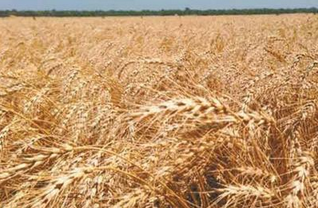 Annual wheat production in the United States more than tripled between 1871 and 1921.  The annual yield from 1869 to 1871 was about 250 million bushels, while from 1919 to 1921 it rose to over 750 million.  Exports from 1914 to 1922 were more than 200 million bushels.  The Great Depression of 1893-1898 came to end as a result of bumper crops of wheat in the U.S. in 1897 and 1898 and crop failure in Europe.
The technology that made this increase possible was the McCormick Reaper.
Through most of history, harvesting grain was labor intensive.  Each stalk had to be cut by hand, either with scythe or sickle.  More often it was the latter, as using a scythe can be very dangerous for the untrained, and only using it once a year it is difficult to learn easily, and it is almost impossible to use on small plots in any event.  Even then, a highly skilled farmer swinging a scythe might only be able to harvest two acres of grain in a day. 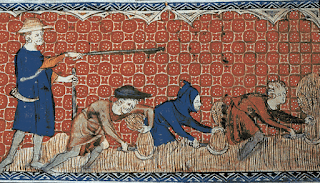 As a result, it was always a race against time in the usual short interval between when the grain was ready for harvest and the rains of Autumn began.  Almost everyone could count on being hungry and on short rations before Spring, even if the full harvest was gathered.  If more land was planted than could be harvested with available labor, or the rains came before the harvest was finished, it would simply rot on the ground and go to waste. 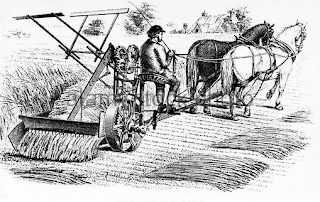 This was the problem Cyrus McCormick, a 22-year old  Virginia blacksmith, addressed in 1831 when he invented the first practical mechanical reaper to harvest grain.  It revolutionized farming throughout the world.
McCormick began with a device his father had worked on but had never been able to get functioning successfully.  In the Summer of 1831, young Cyrus decided he would see what he could do with it, worked for six weeks in the family’s smithy, and in that short month and a half decided he had worked out all the bugs.
Cyrus invited local farmers to a demonstration at Steele’s Tavern, a nearby hangout, and they skeptically viewed a bizarre mechanism that looked like a sledge carrying some machinery.  It evidently wasn’t entirely clear to anyone how this contraption was going to allow farmers to harvest grain at all, much less faster than a man could with a scythe or — especially — a sickle. 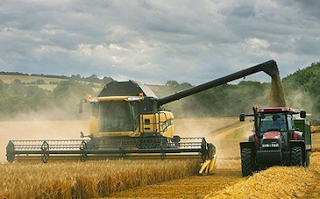 Although McCormick’s first reaper was one-horsepower (being drawn by a single horse), it was quickly evident to the assembled farmers as the demonstration proceeded that they were witnessing something remarkable.  The horse and the machine were doing all the work, while McCormick simply followed with a rake to gather the cut stalks that could then be bound into sheaves as usual, ready to gather, thresh, and winnow.  Later improvements made it possible for a “combine(d) harvester” to go through a field and unload the grain, already threshed and winnowed, all in a single operation.
With a reaper, one man with a horse could now harvest large fields in a day. It was thus possible to have much larger farms, with hundreds or even thousands of acres without having to find large numbers of workers for the harvest.  A single machine was able to do in a day what had previously taken thousands of manhours by hand.
Thus, where the cotton gin had resulted in the revitalization of chattel slavery in the United States, the McCormick Reaper freed humanity from an age-old drudgery.  The only question was . . . to what purpose?
That is what we will look at in the next posting on this subject.
#30#
Posted by Michael D. Greaney at 6:00 AM