With a holiday to break up the week, you would think there would be less important news to report.  On the contrary, however, there is more — as the information about Dr. Noriko Arai demonstrates:
• Noriko H. Arai (新井紀子) on a New Learning.  After seeing a short segment featuring Dr. Noriko Arai on Direct Talk (a show on NHK World, the Japanese public television channel), we did an internet search and found this “Ted Talk” by her presenting her findings from her “Todai Robot” and her concerns about current education.  In most countries today (although she was focusing primarily on Japan), students memorize vast amounts of data — which any computer can do better, e.g., “Watson” on the “Jeopardy Challenge” — but often fail to understand meaning, that is, they do not really comprehend what they “learn” in any meaningful sense.  Applying Dr. Arai’s findings to the difficulties experienced with getting people to accept the Just Third Way of Economic Personalism, we can suddenly understand why, when they are presented with (for example) the principles of binary economics as explained by Louis Kelso and Mortimer Adler, or the laws and characteristics of social justice as explained by Pope Pius XI and CESJ co-founder Father William Ferree, people either look blank, run away, or attack.  Confronted with something that is outside of their store of accumulated “knowledge” of the way things are that they have memorized, they do not have the intellectual tools they need to comprehend anything outside their current frame of reference.  It is not enough to demand that they tell us what is wrong with what we are saying.  “What’s wrong” as far as they are concerned is that the Just Third Way is simply incomprehensible to them and they necessarily react as they do to any other threat, triggering the “fight or flight” mechanism.  What needs to change — and change soon, as Dr. Arai noted — is how young people (and anyone else) are educated.  Without a Justice University to teach fundamental principles of reason and understanding from the earliest years, beginning with parents teaching their infants, the world is heading toward an intellectual Armageddon, not to exaggerate. 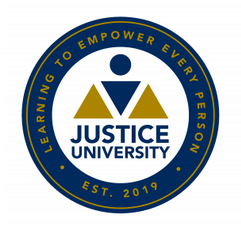 • CESJ Board/Executive Committee Meeting/Community Forum.  CESJ held its 428th consecutive meeting this past Monday, November 25, divided into a Board/Executive Committee portion in which business was discussed and a Community Forum that covered topics of interest to the general membership.
• Justice University Trademark.  With the completion of the two seminars introducing the fundamentals of the Just Third Way of Economic Personalism, all requirements have been met for trademarking the name “Justice University.”  The next step is to present more seminars to larger student groups to expand the outreach.  A suggestion was made that a seminar might be given on just basic definitions and terms so that participants can be prepared for the special language of the Just Third Way.
• Dignity, Freedom, and Power. The final editing of Freedom, Dignity, and Power, the short book on the Just Third Way of Economic Personalism, is in its final stages.  Unless there are no further delays, the book may be formatted and available for distribution by January.
• Shop online and support CESJ’s work! Did you know that by making your purchases through the Amazon Smile program, Amazon will make a contribution to CESJ? Here’s how: First, go to https://smile.amazon.com/.  Next, sign in to your Amazon account.  (If you don’t have an account with Amazon, you can create one by clicking on the tiny little link below the “Sign in using our secure server” button.)  Once you have signed into your account, you need to select CESJ as your charity — and you have to be careful to do it exactly this way: in the space provided for “Or select your own charitable organization” type “Center for Economic and Social Justice Arlington.”  If you type anything else, you will either get no results or more than you want to sift through.  Once you’ve typed (or copied and pasted) “Center for Economic and Social Justice Arlington” into the space provided, hit “Select” — and you will be taken to the Amazon shopping site, all ready to go.
• Blog Readership.  We have had visitors from 28 different countries and 34 states and provinces in the United States and Canada to this blog over the past week. Most visitors are from the United States, India, Canada, Spain, and the United Kingdom.  The most popular postings this past week in descending order were “The Characteristics of Social Justice,” “Thomas Hobbes on Private Property,” “Pillars of a Just Market Economy,” “News from the Network, Vol. 12, No. 47,” and “Why Keynesianism Promotes Waste and Consumerism.”
Those are the happenings for this week, at least those that we know about.  If you have an accomplishment that you think should be listed, send us a note about it at mgreaney [at] cesj [dot] org, and we’ll see that it gets into the next “issue.”  Due to imprudent language on the part of some commentators, we removed temptation and disabled comments.
#30#
Posted by Michael D. Greaney at 6:00 AM