Pillars of a Just Market Economy

The three principles of economic justice as stated by Louis O. Kelso and Mortimer J. Adler in Chapter 5 of The Capitalist Manifesto (1958) are hardly radical.  They are, in fact, in full conformity with the natural law and the founding principles of the United States.  Nevertheless, they had been introduced into a society in which Keynesian economics and New Deal politics were as solidly embedded as unquestionable as the population theories of the Reverend Thomas Robert Malthus.


That both Keynesianism and Malthusianism had unequivocally been proven false made no difference.  They were the “right” way to think on economic issues, and that was that.
Making matters worse, private associations and organized religion as institutions integral to a well-ordered common good were in decline throughout the world — the latest phase in a process that has been going on since the dawn of history.  This was part and parcel of the eternal power struggle between the public sector and the private sector, and between organized religion and government.
As Fulton Sheen noted, the rise of socialism and modernism and the shift from God to collective humanity or the lone individual were in response to the perceived inadequacies of traditional politics and religion.  In this way the State acquired tremendous leverage to assert control over the whole of society.
Private associations came to be seen as less efficient than State action and tended either to be abolished or absorbed into the State.  Similarly, organized religion was widely perceived as irrelevant unless it supported State interests and focused on material wellbeing and rights for special interest groups.
As might be expected, this led to the exclusion of organized religion’s special role to guide and form morality as well as take care of spiritual needs.  As George Holland Sabine explained the extreme (at the time) case of Nazi Germany and Fascist Italy, but which sounds remarkably similar to what prevails today in places around the world,
[J]udicial discretion was extended practically without limit.  The law itself was made studiously vague, so that all decision became essentially subjective.  The penal code was amended in 1935 to permit punishment for any act contrary to “sound popular feeling,” even though it violated no existing law. . . . Totalitarianism undertook to organize and direct every phase of economic and social life to the exclusion of any area of permitted privacy or voluntary choice.  But it is important to observe what this type of organization concretely meant.  First and foremost it meant the destruction of great numbers of organizations that had long existed and that provided agencies for economic and social activities.  [Organizations] which had existed on a voluntary basis and were self-governing, were either wiped out or were taken over and restaffed.  Membership became virtually or actually compulsory, . . . The result was a paradox.  Though the individual was “organized” at every turn, he stood more alone than ever before. (George H. Sabine, A History of Political Theory, Third Edition. New York: Holt, Rinehart and Winston, 1961, 918-919.)
This, from the perspective of social justice, is a disaster.  Freedom of association — liberty — is as integral to social life and the act of social justice as private property.  Just as human beings only gain direct access to the common good as members of organized groups, they ordinarily only gain the power to organize effectively by having direct ownership of capital.
To overcome alienation from the common good and restore the foundation of a just social order, CESJ developed “the Four Pillars of a Just Market Economy.”  These recognize a natural synergy between economic justice and efficiency within a global free marketplace. 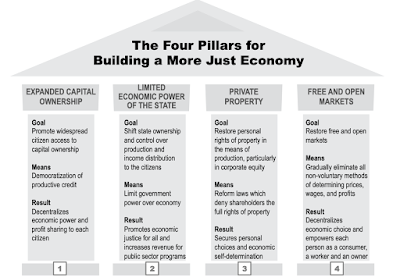 Given the laws and characteristics of social justice and the principles of economic justice, it is evident that a truly free and just global economy requires:
·      A limited economic role for the State.  While people must often make great sacrifices to maintain the great good of the State, such sacrifice must never involve any violation of natural rights or the State loses its legitimacy.
·      Free, open, and non-monopolistic markets.  A truly free market, of course, is not one in which “anything goes.”  Rather, it assumes that the market is constrained by an understandable and fair system of laws.  This makes the free market the most objective and democratic means for determining just prices, just wages, and just profits.
·      Restoration of private property.  This does not refer merely to consumption goods, but to corporate equity and other forms of business organization.  “Property” here refers to the natural, inalienable right to be an owner (“access” — the generic right of dominion), and to the socially determined and limited rights of ownership (“use” — the universal destination of all goods).  The rights of property include the enjoyment of the fruits or profits of what is owned.
·      Widespread capital ownership, individually or in free association with others.  This is not merely for income, although that is important, but primarily for the power it vests in the owner and the “social identity” it confers.
It becomes obvious why socialists are adamant that private property be marginalized or abolished and why capitalists want it confined to an élite.
Power follows property.  If socialism and modernism are to succeed in transforming civil, religious, and domestic society, it is essential that ordinary people be stripped of power through imposition of the proletarian condition.  They must be made utterly dependent on the State, with no recourse to other civil associations, organized religion, or even the family.
A number of modern commentators have asserted that modern society is so corrupt and so hostile to traditional morality, values, and religion that there is no hope.  Nevertheless, once the laws and characteristics of social justice are understood, and the potential of the principles of economic justice and the pillars of a just market economy are integrated into a program of reform, there is not only reason for hope, but actual optimism.  As CESJ co-founder Father William Ferree, S.M., Ph.D., noted in his study of the social doctrine of Pius XI,
[I]n Social Justice there is never any such thing as helplessness. No problem is ever too big or too complex, no field is ever too vast, for the methods of this Social Justice. Problems that were agonizing in the past and were simply dodged, even by serious and virtuous people, can now be solved with ease by any school child. (Ferree, Introduction to Social Justice, op. cit., 47.)
#30#
Posted by Michael D. Greaney at 6:00 AM