The Pons Asinorum of Binary Economics


So why is this posting titled “Pons Asinorum”?  Because that is a term that since the seventeenth century has been used as a metaphor for a problem or a difficulty that separates the wheat from the chaff, so to speak.  A Pons Asinorum, or “Bridge of Asses,” is a critical test of someone’s ability or understanding of a subject.  Evidently, if you cannot “cross the bridge,” and figure out the solution, you are a fool or an ass.  (Or it could have a completely different derivation, but that one seems to fit our purpose best and is the only suggestion we’ve seen as to where the expression comes from.)
The term comes from Book I, Proposition 5 in Euclid’s Elements of Geometry, which is also known as “the Isosceles Triangle Theorem.”  It is the theorem that opposite angles of an isosceles triangle (that is, a triangle with two sides of equal length) are themselves equal.  The converse is also true: that if the two opposite angles of a triangle are equal, then the sides opposite the equal angles are equal in length. 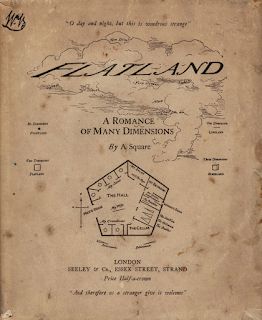 This seems evident, but there are people to whom such a statement is a sealéd book.  Of course, having failed to grasp something that is intuitively obvious, chances are the ass who didn’t “get it” won’t be going much further in geometry, and won’t cross the bridge into Geometryland, probably being stuck in Flatland (by A. Square) and not be able to shift paradigms.
We see something similar in binary economics and in all of the Smithian school of classical economics, which became the Banking School of economics and finance.  That is the simple proposition that it is financially feasible to purchase capital (“finance new capital formation”) that pays for itself out of its own future profits by creating money out of the value of the future production.
The entire Banking School and economic personalism are built on the foundation of this proposition that all adherents of the Currency School deny, some violently, some even with their dying breaths.  The whole of corporate finance assumes as a given that any capital purchased will recover its original cost and yield an acceptable rate of return within a reasonable period of time.
Commercial banking was established on this theory, as was central banking, as a central bank ultimately is a “commercial bank for commercial banks,” i.e., a bank intended to create money as needed for private sector economic development and growth.  The whole theory of commercial banking can be summed up as turning future production into money now to finance the capital that generates the future production.
This is also seen in what financial historian and economist Benjamin Anderson called the first principle of finance: the ability to distinguish between a mortgage (past savings instrument) and a bill of exchange (future savings instrument).  If you don’t understand that, you will never understand either finance or binary economics, and fail to grasp the essentials of economic personalism.
To anyone locked within the “slavery of past savings,” however, what happens every day in business is not merely ignored in formulating economic theory and government policy, but denied vehemently.  John Maynard Keynes built his entire economic theory on the fixed belief on the Currency School dogma that it is impossible to finance new capital formation without cutting consumption, and developed his inflationary program to rationalize stealing from the poor to give to the rich.
Why?  Because if new capital can only be formed by cutting consumption and accumulating unconsumed production in the form of money savings, it necessarily follows that either only the rich who can accumulate sufficient savings can own, or the State, which can manipulate money.  Keynes tried to combine socialism and capitalism into one surreal whole by claiming that only the rich should own, but that the State should control — Henry George with a vengeance (George limited State ownership to land, but later theorists extended George’s theories and techniques to all forms of capital).
The tragic irony of modern economics and finance is that currency manipulation and concentrated ownership of capital (whether in private hands as in capitalism or in the State as in socialism) is completely unnecessary.  Instead of relying completely on cutting consumption to finance new capital formation, it is entirely feasible — and is almost always done — to increase production in the future, that is, to let the new capital finance itself!
That is what commercial banks and central banks were invented to do, not finance government or debauch the currency.  Instead, the idea of commercial and central banking is that if someone has a “financially feasible” capital project (meaning one that has the potential to generate its own repayment), then “pure credit” can be extended based on the value of the capital project itself, thereby creating the money to finance the capital: “self-financing”!
The promise to pay for capital in the future out of the profits of the capital itself is valuable, and being valuable can be used as money — and it is, every day.  Every day consumers and businesses purchase things now by promising to pay for them in the future, thereby creating money!  Money created in this way is non-inflationary because it can only be created when it is backed by the value of private sector assets, and it is cancelled when the credit is repaid.
But what about collateral?
Now, that is a good question and a legitimate one.  What has prevented most people from becoming capital owners throughout history is not lack of financially feasible projects, the desire to be productive, or even the lack of savings, but lack of collateral, you know, the money you need to make money.  No reputable banker is going to create money, putting the bank on the line to make good on it, without getting some assurance that the money will be repaid so it can be cancelled.  That usually means that a borrower must have enough money or other wealth set aside to repay the loan if the capital project does not succeed.
Collateral is thus a form of insurance for a banker.  That being the case, so Louis O. Kelso reasoned, why not use actual insurance as collateral?  Instead of forcing people to scrimp and save for decades to accumulate enough money for collateral or to purchase capital outright, why not have a bank create money for capital projects as now, but use the so-called “risk premium” charged on all loans except the “risk free” (don’t laugh) loans to government as the premium on a capital credit insurance policy?
In this way, it wouldn’t matter whether a particular borrower was “creditworthy.”  Using newly created money to finance new capital formation and collateralizing loans with capital credit insurance can make the project, not the borrower, creditworthy.  Every child, woman, and man in the world could become an owner of capital in this way, thereby freeing economic growth from the slavery of past savings and creating a true personalist society.
#30#
Posted by Michael D. Greaney at 6:00 AM