In the previous posting on this subject, we looked at the idea of money, notably the definition used by Louis O. Kelso.  Today we want to look at how people think the banking system operates as opposed to the way it actually does operate.


Virtually all economics and finance textbooks these days give the same story as to how fractional reserve banking allegedly functions.  We can do this best by example, as trying to explain it otherwise gets into very deep quicksand very quickly.  This is because in our opinion the system doesn’t actually work the way described, which means the explanation naturally isn’t going to make any sense.

Let us reemphasize that point: THIS IS THE WAY ECONOMISTS AND OTHER EXPERTS THINK THE SYSTEM WORKS AND IT IS WRONG, WRONG, WRONG!!!!!!!!!!!!

Here goes.  We assume there is a 10% reserve requirement for commercial banks and all the banks in the example are commercial banks.
·      Customer A deposits Check 1 for $100,000 in Bank X.  This increases Bank X’s reserves by $100,000, of which they hold back 10% or $10,000 and lend out $90,000 to Customer B by giving him Check 2.
·      Customer B deposits Check 2 for $90,000 in Bank Y.  This increases Bank Y’s reserves by $90,000, of which they hold back 10% or $9,000 and lend out $81,000 to Customer C by giving him Check 3.
·      Customer C deposits Check 3 for $81,000 in Bank Z.  This increases Bank Z’s reserves by $81,000, of which they hold back 10% or $8,100 and lend out $72,900 to Customer D by giving him Check 4.
And so on, until no more loans can be made.  Eventually the $100,000 Customer A injected into the system is multiplied to ten times the original amount.
Just one problem.  The system does not operate that way at all.  Checks on deposit are not reserves and cannot be lent out!!!!!!  Checks on deposit are claims on the reserves of the bank on which the check is drawn.  If $90,000 of the money A deposited in Bank X was lent to B and deposited by B in Bank Y (which, by the way, is illegal. . . .), then Bank Y has not increased its reserves — yet, anyway.
No, first Bank Y takes Check 2 and presents it to Bank X for payment.  Bank X takes $90,000 out of its reserves and hands the cash over to Bank Y.  This increases Bank Y’s reserves by $90,000 and at the same time decreases Bank X’s reserves by the same amount.
The net effect on the amount of money in the economy is zero.  Zip.  Zilch.  There is no increase in the money supply, as all that has been accomplished is to transfer funds, regardless how many loans were made and how many banks were involved.
Obviously, that is not the way the system works.  The real story is much different.
Let us assume that the reserve requirement is 10% and Customer A deposits $100,000 in a time deposit (savings account).  This is essential because it is illegal to lend money out of a demand deposit (checking account).  A’s deposit increases the bank’s reserves by $100,000.
The bank does not lend out A’s $100,000.  It would only do that if it were a bank of deposit, and it is a commercial bank.  Instead, the bank creates new money by “accepting” bills of exchange from businesses with good credit ratings who are reasonably expected to repay the money.
The bank cannot just create money at will, however.  First, it can only create up to $1 million because there is a 10% reserve requirement.
Second, the bank can’t just create money because it wants to make a loan.  Commercial banks do not create money to loan, but by making loans.  If someone does not present a “creditworthy” loan proposal to the bank, the bank cannot create money in any amount.
So how does a commercial bank create money?
First, someone brings a “real bill” to the bank.  A “real bill” is a bill of exchange that has “real” value, i.e., is worth something because the individual or business that issued the bill has good credit and is expected to deliver cash to redeem the bill in full at maturity, traditionally 90 days, one quarter of a financial year. 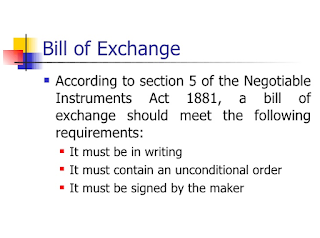 If the bank believes the bill to be good, it will purchase the bill at a discount.  The discount on a bill of exchange is not interest.  Many finance books call it “imputed interest,” but that is incorrect.  Interest can only properly be charged on a loan of existing money, and no money exists yet.  By accepting a bill, a bank has only started the process of money creation.
It is when the bank issues a promissory note and the promissory note is signed by the borrower (the one who is selling his bill to the bank) that money has been created.  It is not yet in usable (spendable) form, but it is almost there.
The bank uses the promissory note to create a new demand deposit in the name of the borrower, who can now spend the money.
But what about the cash?  What if the borrower buys something for his project and the one he bought it from brings the check to the bank and says, “I want to cash this check drawn on your bank.”  All the bank has to back the check is the bill of exchange and the promissory note, neither of which is of any use to the one cashing the check.
That is where cash reserves come in.  Bank reserves are funds held in cash at a commercial bank (“vault cash”) or on deposit by a commercial bank at a central bank to cover transactions demand for cash, primarily any obligations of the bank that are presented for payment.
Because it is unlikely that all of a bank’s obligations will be presented for payment at one time, a bank need not hold all of its financial assets in cash at the bank or on deposit at the central bank (a check drawn on which being legally the same as cash), and may keep an amount equal to a fraction of its outstanding obligations in the form of cash or on deposit at the central bank — the reserve requirement.
Thus, commercial banks typically do not make loans out of reserves, but use reserves to cover any obligations not presented by the original borrower.  This, however, creates a few problems, which we will cover in the next posting on this subject.
#30#
Posted by Michael D. Greaney at 6:00 AM