One of the key elements of the Just Third Way is monetary reform, to which is added essential tax reforms.  The problem is that very few people understand money.  Today we take a look at three concepts about which many people have ideas that may not be entirely accurate, monetization, fractional reserve banking, and the Quantity Theory of Money.


Monetization.  The standard definition of “monetization” in most of today’s schools of economics is “to convert (a debt, especially the national debt) into currency, especially by issuing government securities or notes.”  This definition is rooted in the principles of Keynesian economics (especially the “State Theory of Money” of Georg Friedrich Knapp that assumes only the State can create money) and implicitly rejects Say’s Law of Markets.
The Just Third Way understanding of monetization is the process of turning something of value into the medium of exchange, i.e., into “money,” to facilitate economic transactions.  Anything that exists and that has a measurable value can be turned into money, including promises to produce marketable goods and services in the future.
To be just and legitimate within the Just Third Way framework, the creators of money must have ownership of that which is monetized, and it must have measurable value, even if only among the parties to a specific transaction.  Government debt fails to meet the Just Third Way criteria for monetization on both counts, as it is backed by future tax collections that the government does not yet own, and the present value of future tax collections cannot be known with the necessary degree of certainty. 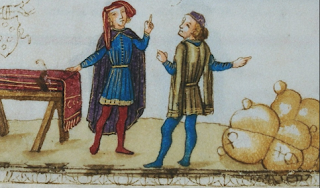 Thus, if two parties agree between them to trade one good for another in a barter transaction, monetization has occurred, even if the entire transaction has been carried out without reference to any unit of currency.  In an economy that has moved beyond barter and uses currency (“current money” measured in terms of a generally recognized unit of value), economic transactions are usually measured in terms of the recognized unit of value (e.g., “dollar,” “pound,” “peso,” etc.), and special institutions called commercial or mercantile banks regulated by a central bank that links the commercial or mercantile banks together into a network to maintain uniformity and stability function to turn existing and future things of value into currency or the equivalent, such as demand deposits (checking accounts).
Fractional Reserve Banking.  Bank reserves are funds held in cash at a commercial bank (“vault cash”) or on deposit by a commercial bank at a central bank to cover transactions demand for cash, primarily any obligations of the bank that are presented for payment.  Because it is unlikely that all of a bank’s obligations will be presented for payment at one time, a bank need not hold all of its financial assets in cash at the bank or on deposit at the central bank (a check drawn on which being legally the same as cash), and may keep an amount equal to a fraction of its outstanding obligations in the form of cash or on deposit at the central bank.
With modern communications and a central banking system, a legally imposed fractional reserve requirement is an anachronism, as any commercial bank can either borrow reserves on demand through the central bank, or sell some of its financial assets for cash to the central bank immediately to meet any or all of its obligations.  Just Third Way monetary reforms include a 100% reserve requirement, ensuring coverage of all of a commercial bank’s obligations by selling all offsetting financial assets to the central bank (commercial banks create money by accepting assets and issuing offsetting negotiable claims against the assets), which issues cash or creates demand deposits at the central bank to the full amount of the bank’s financial assets, and thus its obligations.
This allows loans to be made based exclusively on the creditworthiness of the project itself, not any arbitrary amount established by regulators or politicians.  The erroneous belief that commercial banks make loans out of reserves encourages banks to make bad or questionable loans when there are “excess” fractional reserves, and prevents banks from making good loans if extending credit even for the most creditworthy borrower would cause the amount of the bank’s financial assets to exceed the fractional reserve requirement.
Quantity Theory of Money.  The Quantity Theory of Money is that the money supply and the price level in an economy are in direct proportion to one another.  In “Currency Principle” schools of economics such as Keynesian, Monetarist/Chicago, and Austrian, this means that when there is a change in the supply of money, there is a proportional change in the price level and vice versa, with the price level being affected by the “velocity” of money (the average number of times each unit of currency is spent in a year) and the number of transactions.
In “Banking Principle” schools of economics such as “Smithian” classical economics and binary economics, the money supply is in direct proportion to the price level, again with the price level being affected by the velocity of money and the number of transactions, but the relationship of price level to the money supply is not reciprocal, that is, absent artificial manipulation of the money supply such as issuing currency backed by government debt or altering or changing the standard of value, the price level, the velocity of money, and the number of transactions determine the money supply, the money supply does not determine the price level, the velocity of money, and the number of transactions.  This relationship is expressed mathematically in both Currency Principle and Banking Principle economics in the Quantity Theory of Money equation:

where M is the money supply, V is the velocity of money, and Q is the number of transactions.