As we saw in the previous posting on this subject, the appointment of the Reverend Renn Hampden to the Regius professorship of Divinity at Oxford University in the 1830s provoked an intensification in the ongoing struggle to define the identity of the Church of England.  Hampden’s innovative views on what constitutes Christianity provoked a storm of outrage among the more traditionally minded (meaning those who accepted Jesus as the Son of God and the Messiah), which in turn prompted a reaction from Hampden’s supporters.


Since from an orthodox Christian perspective Hampden’s position was not defensible, his supporters needed something other than “mere Christianity” to justify attacking those whom they termed his persecutors.  This they found in the by-now visceral reaction against “Romanism.” 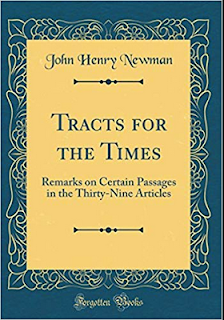 The first collection of Tracts for the Times that came out at this time added fuel to the fire.  By forcing the question “What is the Church of England?” into the public arena, people were compelled to deal with a sleeping dog most of them would have preferred to let lie.  Socialists and modernists (as Chesterton pointed out, two sides of the same coin) were confronted with the necessity of defending what they could not defend with either faith or reason, and so raised the specter of the Romish bogeyman and engaged in ad hominem attacks.
Being confined to legitimate means of argument, i.e., applying reason to empirical evidence as well as to matters of faith, members of the Oxford Movement were automatically at a disadvantage in a debate in which the opposition were using tactics at which they excelled.  Even so, by any objective assessment, the Movement’s position was correct in religious principle, if not completely so in application.
From the Catholic point of view the conflict was inevitable.  Fundamental principles of Christianity are the fundamental principles of Catholicism.  Insofar as a principle or belief is Catholic it is Christian, and vice versa.  There can be no meaningful distinction between Catholicism and Christianity — from the Catholic point of view.
This presented the leaders of the Movement with a conundrum.  Firmly believing that “the Church of Rome” had erred in certain of its doctrines and in its practices or disciplines, they also maintained that the fundamental principles of the Catholic Church and of the Church of England were in essential agreement.  They could not afford to be “Roman,” but at the same time they were obliged by their own principles to be “Catholic.”
This meant that the Via Media as John Henry Newman developed it did not merely attempt to establish a golden mean between Protestantism and “Roman Catholicism.”   Inadvertently Newman also tried to tread the sometimes vaguely drawn and uncomfortable line between an understanding of the natural law based on faith and an understanding discerned by reason.  Thus, he and other members of the Movement asserted “infallible authority” that required believers to “transcend the conditions of [their] experience.”  (Church, The Oxford Movement, op. cit., 147.)
By putting faith and reason in opposition, i.e., requiring believers to accept something that contradicts the evidence of their senses, “Anglo-Catholicism” became an alternative to socialism, modernism, and liberalism but without countering them.  Alternative forms of Christianity necessarily remained a viable option within the Church of England as a political necessity.  The struggle was not over whether a particular doctrine or lack thereof was consistent with fundamental Christianity, but whether it was popular or politically expedient.
R.W. Church noted two other weaknesses in the Movement’s position.  As he explained,
The first of these was that the authority of the undivided Church, which Anglicanism invoked, . . . did not cover with equal completeness other important points of controversy, such as those raised at the Reformation as to the Sacraments, and the justification of the sinner. . . . The other point was more serious.  “Your theory,” was the objection, “is nothing but a paper theory, it was never a reality, it never can be.  There may be an ideal halting place, there is neither a logical nor an actual one, between Romanism and the ordinary negations of Protestantism.” (Ibid., 147-148.)
Church, naturally enough, gave reasonable and quite logical responses from the Anglican point of view to these weaknesses, as did the members of the Movement.  The problem was, of course, that those raising the objections were not interested in answers, but in finding accusations that would cause enough mud to stick.  In addition, by positing a framework that allowed for an orthodox position that could pick and choose between Catholicism and Protestantism virtually at will gave legitimacy to the unorthodox to do the same thing and therefore claim at least equal legitimacy — and add a touch of anti-Catholicism.
As was only to have been expected, the bottom line is that orthodox Anglicans were seriously handicapped in the conflict by having to assign meanings to doctrines and definitions.  They could not be inclusive if that meant compromising on something they regarded as a fundamental Christian doctrine.  They could not in honesty “go along to get along.”
Socialism, modernism, and the New Age, however, absolutely require that all religious concepts be utterly stripped of meaning so that they can be adapted instantly to modern conditions or whatever is politically expedient.  This is not the personal interpretation of traditional Protestant thought which in a Protestant (or Jew, Muslim, or Pagan) with a well-formed conscience — meaning one consistent with the precepts of the natural law written in the hearts of all men — will parallel if not come to the same conclusion as a Catholic formed in the Aristotelian-Thomist understanding of the natural law.  All “natural religions” will do the same, as the absolutes of the natural law are essential to any religion.  When the understanding of the natural law is divorced from absolutes, however, might makes right.
That was why Hampden, instead of taking what would seem to be the obvious step of either leaving the Church of England or working to get it disestablished, insisted on staying in.  His income depended on it, of course, but he also needed the political power of the State to back him up and maintain his position against those of more orthodox beliefs.  By abolishing doctrine, it would be possible to expand membership in the Church of England even to non-Christians, thereby broadening the base of political support for alternative forms of Christianity to be able to resist and finally overcome the vestiges of orthodox belief and conservative politics.
#30#
Posted by Michael D. Greaney at 6:00 AM