Counterattacking in the Culture Wars

Recently we’ve been reading a few books about the decay of culture and civilization.  We mean recent books, although the general theme and even many of the specifics have been the subject of commentators for millennia.  They all have certain elements in common: 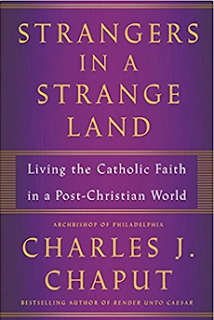 ·      Everything is going to hell,
·      Nothing is as good as it used to be,
·      It’s somebody else’s fault, and
·      If (other) people would either do right or let us do right, everything would be fine.
Perhaps shockingly, we agree (mostly), at least about the first two items in a limited sense.  The third and fourth are really the same thing, failures of social justice, but we’ll get to that in a while.  What concerns us immediately is the claim that everything is going to the dogs.
The books we’ve been reading, Rod Dreher’s The Benedict Option (2017), Anthony Esolen’s Out of the Ashes (2017), and Archbishop Chaput’s Strangers in a Strange Land (2017) all (obviously) came out in the same year at about the same time and all give generally the same diagnosis, and the same immediate causes of today’s situation.
What none of the authors really gets into, however (although Chaput gets very close . . . but then doesn’t make the final connection), are the causes behind the causes, which our research suggests strongly is the loss of power by ordinary people — power over their own lives.  Institutions that once supported personal economic power for gaining control over your own life have largely been replaced by institutions that support personal political power for gaining control over the lives of others.
The so-called Enlightenment often comes in for a beating (less of a one from Chaput), and usually rightfully so.  A lot of ideas that (not to put too fine a point on it) are just plain nutty came out of it.  Few of the critics, however, bother to separate out the good ideas of the Enlightenment from the bad ideas, or — worse — wonder why, other than the presumed depravity of those who promoted the ideas, people even came up with crazy ideas in the first place . . . and why people believed them.
Answering the second concern first, people were so ready to believe nutty ideas because they were desperate.  Society was falling apart and things were spiraling out of control.  Only in America — which had its own problems with slavery and the treatment of native peoples — was there any semblance of the way things used to be.  Not by coincidence the three authors noted above, Dreher, Esolen, and Chaput, all cite Alexis de Tocqueville’s Democracy in America (1835, 1840).
Oddly, however, none of the critics seems able to identify the specific problem that caused the other problems.  This is despite the fact that de Tocqueville mentioned the basis of what made America unique, as did William Cobbett and a few generations later Frederick Jackson Turner.
And that was?
In America anyone who wanted to and was willing to take the risk could become an owner of capital.  Usually this was in the form of land, but also technology up to a point.  (The financial system was not very well regulated, to say the least, and the means for acquiring and possessing capital in the form of technology was open only to a relatively few people.)

The Industrial Revolution only really took hold in the United States with the Civil War, which — not by coincidence — was accompanied by changes in the underlying assumptions about where sovereignty resides.  Prior to the Civil War, sovereignty was presumed to reside in actual human beings.  After the Civil War, sovereignty was presumed to reside in the collective.  (That is a general statement of course, based on the changing interpretation of the Constitution, especially by the U.S. Supreme Court.)
How this came about is not important for the purposes of this discussion.  The important issue for this discussion is that with the Industrial Revolution, financed largely by the invention of central banking and the expansion of commercial and mercantile banking, advancing technology began displacing human beings from production.
Despite the so-called “Labor Theory of Value,” in classical economics there are three factors of production, land, labor, and capital.  To get a better and more accurate analysis and understand more clearly what happened, in binary economics we consider the factors of production as two: the human (labor) and the non-human (capital, which includes both land and technology).
Technology advances and becomes capable of producing more marketable goods and services than are put into it, phenomenally so in most cases.  That is the whole purpose of technology.
Land, too, can be improved and made more productive by adding technology, such as better farming or grazing methods, enriching the soil, and so on.  In both instances output far exceeds input — a profit is intended to be made, or there would be no point in using technology or land to do anything if inputs exceed outputs.
Human labor is different.  If the meaning and purpose of life were to be a producing machine to make a profit, human beings would be a miserable failure.  Taken solely as labor with no addition of or enhancement by land or technology, human labor output is usually so far below the input required to keep the “human machine” running that — fortunately — slavery (using people as if they were things) is generally economic only in low-technology situations.  (The cotton gin created an anomaly, high tech processing combined with low tech production.)
The meaning and purpose of life is not, however, material wellbeing so that “anything goes” as long as it is economically feasible or beneficial in the aggregate.  That is the goal of socialism, the material advancement of humanity in the aggregate, the greatest good for the greatest number, regardless whether any individual’s or group’s rights are violated.
In socialism, if the Capitalists, Reactionaries, Jews, Blacks, Catholics, Armenians, Japanese, or anyone else are in the way, or someone in power thinks they might be in the way, or get in the way in the future, get rid of them.  It is, as the High Priest Caiaphas said, better that one innocent man suffer than the nation perish . . . and he lose power, prestige, and position.
In most traditional faiths and philosophies, however, the goal of life is not mere animal comforts and material wellbeing.  That is important, of course, and should not be denigrated.  It takes a distant second, however, to the need to become more fully human, that is, to acquire and develop virtue: “human-ness.”
The deliberate violation of the rights of a single innocent human being is such a heinous offense that all faiths and philosophies acknowledge that it justifies even overthrowing the State and instituting a more just government.  It is why in a justly ordered system someone is presumed innocent until proven guilty — not suspected, not rumored, not anything other than actual, direct proof.
It’s also why, for example, the Catholic Church classes “calumny” (destroying someone’s reputation by spreading detrimental stories in the absence of proof) as a “mortal sin,” i.e., one that kills life in the soul and condemns someone to eternal damnation.  (“Backbiting” is pretty bad, too.  It’s damaging another’s reputation by spreading stories that may be true, but that the tattler has no right or obligation to spread around . . . and not too many people have the right to act as judge, jury, and executioner on their own intiative.)
And it’s why socialists are anxious to redefine justice of all kinds.  Even they know that a false accusation knowingly made would destroy their credibility and their claims to legitimacy.  It is essential, therefore, for socialists to frame mere ownership of wealth as being itself a crime.  In this way, confiscation of wealth and punishment of the capitalist for the crime of being wealthy becomes a virtue rather than a vice.
Reasoning like that, however, is what desperate people wanted to hear, not traditional politicians telling them to remain calm and orderly and things might get better, or traditional religions promising a good life in the next world if they acted virtuously in this life.  Why, after all, should they settle for “Pie in the Sky” when they wanted bread now?
So, it is no wonder that the ideas of the Enlightenment and the “new things” of socialism and modernism spread so far so fast.  When traditional politics and religion seemed utterly helpless to ensure life at all, much less a decent life, what good were they?  Why not go with Enlightenment ideas or those of the “democratic religion” of socialism?  What did they have to lose?
Well . . . everything, but that is what we’ll look at in the next posting on this subject.
#30#
Posted by Michael D. Greaney at 6:00 AM