Distributism and Ronald Reagan, I

President Ronald Reagan?  The Gipper?  A distributist?  Yes — at least according to John Chamberlain in his July 8, 1981 These Days column, “Everything Back to the Electorate.”  Chamberlain, who anticipated today’s Chesterton revival by a few years, compared Reagan favorably to G.K. Chesterton and Hilaire Belloc.  Possibly outraging many who even then equated distributism with “democratic” or other forms of socialism, Chamberlain claimed that the problem with England and its “Nanny State” was that they had gone over to Fabian socialism instead of to distributism. 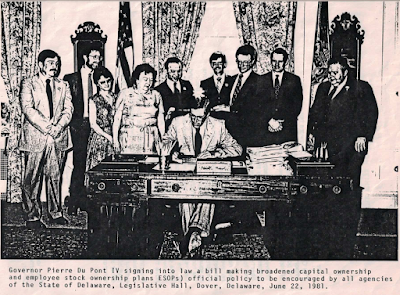 What caused Chamberlain’s Chestertonian chatter (sorry)?  On June 22, 1981, Governor Pete Du Pont of Delaware signed into law House Bill 31.  And what was special about that?  The bill made broadened capital ownership and Employee Stock Ownership Plans (ESOPs) official policy to be encouraged by all state agencies.  As President Reagan (1911-2004) said in a congratulatory note he sent to Du Pont the day of the signing,
The General Assembly of the State of Delaware has taken an important step by the adoption of House Bill 31, which makes it the policy of the state to encourage the broadening of the base of capital ownership among the people of the state.  I have long believed that the widespread distribution of private property ownership is essential to the preservation of individual liberty, to the strength of our competitive free enterprise economy, and to our republican form of government.
This was not the first time Reagan had declared his strong support for expanded ownership, nor would it be the last.  As governor of California he had stated in a speech before the Young Americans for Freedom on July 20, 1974 that the United States needs an “Industrial Homestead Act” to continue and expand on Abraham Lincoln’s 1862 land-based initiative.
It was only a few years after then-Governor Du Pont signed the bill into law that CESJ mobilized bipartisan political support for Congressional legislation which established the Presidential Task Force for Project Economic Justice under Reagan.  The concept, first conceived in a strategy paper authored by Norman Kurland, president of CESJ, offered a revolutionary economic alternative to military solutions to regional conflicts in Central America and the Caribbean.
Enacted as part of the International Security and Development Cooperation Act of 1985, this legislation created the first presidential task force funded entirely with private donations.  It was supported by both the U.S. Chamber of Commerce and the AFL-CIO.
John William Middendorf II, former Ambassador to the Organization of American States and the European Community, served as Chairman.  Kurland, CESJ’s president, served as Deputy Chairman.
The Task Force’s 1986 report, High Road to Economic Justice, was America’s first official endorsement of expanded capital ownership as a policy for achieving economic democracy, the essential precondition for reestablishing the natural law foundation of a stable political order.  Some of the Task Force’s recommendations were adopted into U.S. foreign policy.  They were also included as one of the World Bank’s “market based” options for debt-equity conversions through ESOPs.
Just Third Way supporters throughout the world praised the initiative, including Don Alberto Martén Chavarría, founder of Solidarismo Costariccense (which also gave its endorsement) and an expert on the thought of Father Heinrich Pesch, S.J.  Others included the controversial Jesuit Father Claudio Solano, founder of the John XXIII Social School in San José, Costa Rica.
It was on the occasion of CESJ’s delivery of the report at a White House ceremony that Reagan gave the speech lauding the Task Force’s efforts and the work of the CESJ representatives.  He made special mention of the program of La Perla coffee plantation in Guatemala, where worker owners had taken arms against communist insurgents to protect their lives, liberty, and property.  Previously, workers had either run away or joined the insurgents.
In addition to making a reference to Lincoln’s Homestead Act, Reagan declared, “what will change despair into confidence, deprivation into plenty, stagnation into upward mobility, is a commitment to human freedom and an understanding of how that relates to the economic progress of mankind.”
A copy of the Task Force report was also presented to His Holiness Pope John Paul II in a private audience at the Vatican in company with representatives of Polish Solidarity.  It was on this occasion that the pope gave his personal encouragement of the work of CESJ.
In 1988, CESJ members and friends funded the Polish translation of the Task Force orientation book, Every Worker an Owner.  Forty thousand copies of the translation were distributed throughout Solidarity channels in Poland prior to the dismantling of the Soviet Union.  Copies (in English) were sent under cover letter in May 1988 to every USAID mission around the world.
November 1991 saw a CESJ delegation travel to Rome to present the English and Polish versions of Every Worker an Owner to John Paul II in a Vatican ceremony.  At CESJ’s all-day seminar presenting the Just Third Way to Church leaders and scholars, Achille Cardinal Silvestrini presented the first Global Awards for Value-Based Management to the heads of three worker-owned companies on behalf of CESJ.
As a result of the Rome conference, CESJ’s most important collection of essays, Curing World Poverty: The New Role of Property, was compiled and published in 1994 by the Social Justice Review, the official journal of the Central Bureau of the Catholic Central Union of America in St. Louis, Missouri.  Approximately 5,000 copies were distributed, reaching high-level policy makers, business executives, labor officials, scholars, and religious leaders worldwide.
As for Reagan’s speech at the ceremony to present the report of the Task Force . . . that is what we will look at tomorrow.
#30#
Posted by Michael D. Greaney at 6:00 AM