In our previous posting we saw how, by the simple expedient of “re-editing the dictionary” — shifting the source of rights from actual flesh-and-blood human beings to the abstraction of the collective (“mankind” or “humanity”) — the U.S. Supreme Court managed to interpret the U.S. Constitution in a way exactly the opposite of that intended by the framers of the Constitution, and the principles embodied in the Virginia Declaration of Rights and the Declaration of Independence.


The issue today is how to get things back on track.  It won’t be easy, but it can be done — and it is pretty simple.  (“Easy” and “simple” are not synonyms, by the way.)
As with many other things, it’s a question of power.  Yes, that dirty word, power.
And if you’re a regular reader of this blog, you know what’s coming next.  We quote Daniel Webster (or, for a change of pace, Benjamin Watkins Leigh) from the Massachusetts Convention (or the Virginia Convention) of 1820, “Power naturally and necessarily follows property.”
By “property” we don’t mean stuff.  Not even the best stuff.  That’s because property is not stuff, i.e., “things.”  Property is 1) the inherent, absolute, inalienable right every child, woman, and man has built into human nature itself to own stuff, and 2) the socially determined and necessarily limited bundle of rights that define how an owner may use his or her stuff.  In general, no one may use his or her stuff in any way that harms other people, groups, or the common good as a whole.
Now, what kind of stuff are we talking about?  Not consumer goods.  No, we’re not denying the right of anyone to own consumer goods.  That would be stupid.  Even Karl Marx admitted that people have the right to own the food, clothing, and shelter they need.  The real question is who owns the productive stuff (land and technology) that makes the consumption stuff (food, fiber, and fuel)?
That’s the real issue.  It’s not whether somebody just gives you what you need, although that may at times be necessary as an expedient in an emergency.  It’s whether you have the ability to produce what you need, either to consume yourself, or to trade to someone else for what that someone else has produced that you want to consume.  As Adam Smith said, and on which he built his entire economic theory, “Consumption is the sole end and purpose of all production.”
That’s because if someone just gives you what you need, you become dependent on that someone.  Offend him or her, and the flow of goodies might stop.  If you own that which produces what you consume, whether directly or indirectly, no one can claim you are a “useless eater” and a drag on the economy.  If, however, you are receiving what you consume from others without producing something that you exchange in return, it’s very easy to claim you’re just a leech, and society would be better off without you.
(Unless you’re John Maynard Keynes, in which case you claim that people who produce what they consume with anything other than labor are “functionless investors” and should be “euthanized” because they don’t set aside goods for non-consumption. . . . in other words, because they act rationally, rentiers don’t fit into the Keynesian model based on contradiction.)
The problem, of course, is that as land runs out, and technology becomes expensive, how are ordinary people supposed to become owners when labor alone cannot produce in competition with advancing technology?  As Frederick Jackson Turner pointed out back in 1893 (or maybe it was 1892. . . .) the end of “free” land under the Homestead Act meant the end of democracy . . . unless somehow the expanding commercial and industrial frontier could replace the vanished land frontier. . . . 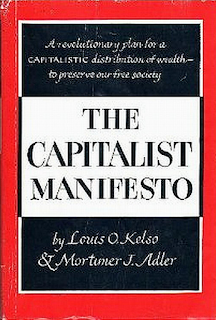 This was the situation Louis O. Kelso and Mortimer J. Adler addressed in their two collaborations, The Capitalist Manifesto (1958) and The New Capitalists (1961).  The answer?  Open up the means for ordinary people to finance new capital formation on the same terms as the rich: purchase new capital on credit that pays for itself out of future profits, and thereafter generates a living income for the owners of the capital.
All of a sudden, ordinary people would once again have the political power that follows economic power, and a truly liberal and democratic society could re-emerge — not the shabby, pseudo-liberal ideologies based on moral relativism and the abandonment of reason, in which the great mass of people are always looking over their shoulders to avoid offending those with economic, and thus political power.
That is the whole point of a Capital Homesteading program, and why an aggressive program of expanded capital ownership must have a place in current political dialog . . . making you wonder why nobody seems to be talking about it. . . .
#30#
Posted by Michael D. Greaney at 6:00 AM