Any editorial comment on recent events would be superfluous, as they either explain themselves, or are manifestly contrary to reason.  That being the case, here are this week’s news items:


• But before we start, here’s the usual announcement about the Amazon Smile program.  To participate in the Amazon Smile program for CESJ, go to https://smile.amazon.com/.  Next, sign in to your account.  (If you don’t have an account with Amazon, you can create one by clicking on the tiny little link below the “Sign in using our secure server” button.)  Once you have signed into your account, you need to select CESJ as your charity — and you have to be careful to do it exactly this way: in the space provided for “Or select your own charitable organization” type “Center for Economic and Social Justice Arlington.”  If you type anything else, you will either get no results or more than you want to sift through.  Once you’ve typed (or copied and pasted) “Center for Economic and Social Justice Arlington” into the space provided, hit “Select” — and you will be taken to the Amazon shopping site, all ready to go.

• Another example of the growing chaos the world is in, although this one not directly related to the failure to implement the Just Third Way, is the fact that no one knows what time it is in Chilé.  The government has been “tinkering” with the time so much that people have no idea what the “real” time actually is, according to an article in today’s Wall Street Journal. 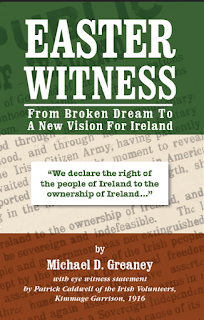 • CESJ’s latest book, Easter Witness: From Broken Dream to a New Vision for Ireland, is available from Amazon and Barnes and Noble, as well as by special order from many “regular” bookstores.  The book can also be ordered in bulk, which we define as ten copies or more of the same title, at a 20% discount.  A full case is twenty-six copies, and non-institutional/non-vendor purchasers get a 20% discount off the $20 cover price on wholesale lots ($416/case).  Shipping is extra.  Send enquiries to publications@cesj.org.  An additional discount may be available for institutions such as schools, clubs, and other organizations as well as retailers.  Initial sales are encouraging, and CESJ (although interfaith) has applied for an “imprimatur” which will allow the book to be used as a text in Catholic schools.  We received word that the books ordered for the Archbishop of Dublin have been shipped and should arrive today or early next week.

• Many people assume that Father Daniel Berrigan, S.J., who recently died, was an advocate of, and activist for “social justice.”  Whether his acts were just is one issue, but they were clearly not social justice, as this article, “Father Daniel Berrigan Found Fame in the Pursuit of Justice,” suggests, and (as the title of the article suggests) may have been motivated by a bit of self-interest.  On the other hand, the contention of Father John Courtney Murray, S.J., that a just social order might be established and maintained by relying on natural law is, in our view, correct — but impossible without the Just Third Way, which not only insists on a just social order based on the precepts of the natural law, but proposes specific means and techniques to establish and maintain a just social order, without which it is all just talk.

• Another illustration of the egregious misunderstanding of “social justice” today is seen in the hysteria over a “prom” photograph that most people who saw it thought was “cute” (a word we generally detest, but it’s appropriate here).  The term “social justice” has been used as a club to oppress and denigrate others, instead of as a way to help establish and maintain a just social order.

• As of this morning, we have had visitors from 62 different countries and 50 states and provinces in the United States and Canada to this blog over the past two months. Most visitors are from the United States, Canada, the United Kingdom, Brazil, and Australia. The most popular postings this past week in descending order were “Thomas Hobbes on Private Property,” “Aristotle on Private Property,” “Curb Your Dog(ma),” “Why a Central Bank: More Practical Considerations,” and “The Purpose of Production.”