The gamblers are ecstatic: the stock market is having its best quarterly rally since 1933!! . . . you know, when the country was on the skids, there was high unemployment, Keynesian economics was artificially inflating prices by backing money with enormous amounts of government debt and concentrating economic power in the State, the Spanish Civil War was about to start, the Japanese were about to invade Manchuria, Hitler had just come into power, and the country was about to enter the “Depression within the Depression” . . . what was there to worry about?
Okay, plenty, but here are some news items that might brighten your day:

• On Wednesday of this week Norman Kurland and Dawn Brohawn attended a presentation on “Central America in Focus: Insights on Migration and Sustainable Development.”  A significant number of the participants and speakers appeared to be greatly interested in the potential of the Just Third Way for Central America.  This is hardly surprising, given that Central America and the Caribbean Basin were the focus of the Presidential Task Force on Project Economic Justice in the mid-1980s.  Both President Ronald Reagan and His Holiness Pope St. John Paul II spoke favorably of the Just Third Way when presented with copies of the orientation book and task force report, Every Worker an Owner, and High Road to Economic Justice, respectively.

• On Thursday of this week Norman Kurland attended an event at Georgetown University, “The Myth of a Universal Islamic State.”  Speakers concentrated on demonstrating that, according to the Quran, there is no mandate for a universal caliphate or anything else such as radical Muslim extremists are demanding.  This makes sense, for even the concept of a Nation-State is a relatively new concept on the political scene, being a little over two hundred years old at most.  A number of the people there sounded very interested in the Just Third Way.

• At noon, EDST, on March 21, 2016, CESJ Board of Counselors member Dr. Norman Bailey Professor of Economics and National Security at the University of Haifa, Israel, will be participating (via video) in a Heritage Foundation event, “The Grand Strategy That Won the Cold War: Architecture of Triumph.” You can either attend in person, or watch on the internet.

• This past week we received a copy of Redmond FitzGerald’s Cry Blood, Cry Erin (1966).  It wasn’t exactly what we were expecting — it’s an early “coffee table book” — but still very useful as it provides photos and other illustrations dealing with the struggle for an independent Ireland. 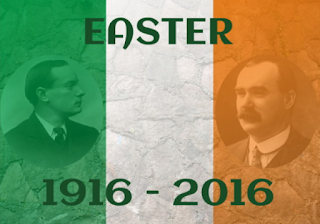 • The first draft of our book dealing with a Just Third Way “take” on the Easter Rising in Dublin, Éire, in 1916 is finished, and is now in the first revision stages.  The working title is What th’ Hell are Th’ Up to Now?, from playwright Seán O’Casey’s description of the “attack” on the General Post Office in Volume III of his memoirs, Drums Under the Windows (1945), in which he recalls an old man muttering, “half to himself and half to an elderly, thin lady beside him . . . ‘What th’ hell are th’ up to now? . . . Somethin’ brewin’?  Ma’am, there’s always somethin’ brewin’.  I’m seventy, an’ I’ve never known an hour that I didn’t hear tell of somethin’ brewin’.’”

• As of this morning, we have had visitors from 52 different countries and 52 states and provinces in the United States and Canada to this blog over the past two months. Most visitors are from the United States, the United Kingdom, Canada, India, and Sudan. The most popular postings this past week in descending order were “Thomas Hobbes on Private Property,” “Aristotle on Private Property,” “The Purpose of Production,” “The Crisis That Need Not Be, I: A System Designed to Fail,” and “Socialist Delusions, Capitalist Illusions, XII: Popular Capital Formation.”