Do We Need the Rich?, VII: How to Make Money

Yesterday we addressed the rather obvious point that you can’t destroy rights for some in order to restore rights for others, especially private property.  To argue that the rich should have their presumably ill-gotten gains taken away simply because they’re rich — which is taken as de facto proof of wrongdoing — simply makes all property insecure.


After all, if it was right to take from the rich to give to the poor, isn’t it right that the former rich have an equal right to take back what was taken from them by the former poor on the grounds that now they are poor?  This sort of thing could go on forever, with the only people making out are those doing the redistributing, for they will always have jobs turning the poor into rich, and rich into poor, and back again for as long as people will put up with it.
If, however, we want to make everyone rich (or at least have a competency, i.e., enough to live on in reasonable comfort), there are three things we must do:
One, stop monetizing government debt.  Despite popular myth, central banks weren’t invented to finance government.  They were invented to ensure adequate liquidity (“accommodation”) for the private sector, so that there would always be enough money and credit in the system to carry out commerce, “money” being defined as “all things transferred in commerce.”  Just as there have to be enough feet and inches to measure length, there has to be enough money to measure transactions.
When government creates money backed by nothing except the present value of future tax collections (the faith and credit of the government), it throws a monkey wrench into the works by separating money from the things transferred in commerce (marketable goods and services) — what money measures.  By issuing money backed by its own debt, a government fiddles with the standard of value, which means that it is no longer a standard of value. . . .
Two, start monetizing private sector assets.  In finance, everything that can be transferred in commerce has a “present value.”  All that means is that you can assign a value to something right now, whether it’s something you have on hand right now, or something you reasonably expect to have tomorrow.  Given that something has value, it can be embodied in a contract — the “elements” of a contract are 1) offer, 2) acceptance, and 3) consideration.  Offer and acceptance are pretty obvious, and “consideration” only means the things of value the contract deals with.
For example, I say to you, “I will mow your lawn in exchange for two Reuben sandwiches and a kosher dill pickle spear.  The lawn mowing is my “offer.”  My consideration is two Reuben sandwiches and a kosher dill pickle spear.  You say, “Sure.”  Your “sure” is your “acceptance.”  The lawn mowing is your consideration.  We have just created money by agreeing to a contract, i.e., creating obligations on both sides; we each went into debt to the other.  By mowing the lawn, I satisfy my debt to you, and by handing over two Reuben sandwiches and a kosher dill pickle spear you satisfy your debt to me, thereby cancelling the money we created between the two of us.  This is why money is also defined as “anything that can be accepted in settlement of a debt. 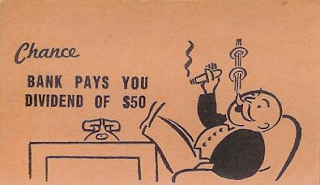 Three, create money in ways that turn people who don’t own capital into people who own capital.  How?  Instead of lawns and Reuben sandwiches, let’s expand the concept to newly issued dividend paying shares representing new capital formation.  A company in a country with a population of one million wants to expand operations, doubling its investment in capital equipment and everything that goes along with that.  The company realizes 25% return on invested capital, and pays out all income as dividends to the shareholders.  (Obviously we’re ignoring the tax effects to make the scenario as simple as possible.)
The company currently has $100 million in outstanding shares, which yield $25 million each year in dividends.  To become a $200 million company and pay out $50 million in dividends each year, it needs to “float” a new issue of shares for $100 million.  To do that, it needs a lot of people to become new shareholders.  Given that every child, woman, and man in the country has an equal right to become an owner of those shares as long as he or she can come up with the money, the only question is how to get the necessary money into the hands of people who will use it to become new owners of assets that pay for themselves out of their own future profits, i.e., the dividends the company pays out.
Everybody in the country has the right to purchase $100 worth of the new shares.  Each person or his or her agent goes to a commercial bank and makes an offer: “I/my principal will pay you $102 over the course of five years and give you a lien on those shares for that period if you will give me $100 to purchase $100 worth of newly issued shares of the company.  The bank’s loan officer says “sure,” creates (issues) a promissory note that the “borrower” and the “lender” both sign.  Each one gets a copy of both the contract and the promissory note.  The loan officer then “deposits” the bank’s copies of the bank’s promissory note and the borrower’s contract, and the bank creates a new “demand deposit” backed by the bank’s promissory note, which is backed by the borrower’s contract, which is in turn backed by the reasonable expectation that the shares the borrower will purchase with a check drawn on the new demand deposit will pay out at least $102 in dividends over the next five years so that the borrower can satisfy the debt he or she incurred by signing the promissory note and buy back the contract.
#30#
Posted by Michael D. Greaney at 6:00 AM