Do We Need the Rich?, II: Faith v. Reason

Last week we applied our reason to the task of deciding whether or not we “need” the rich as human beings and thus as members of society — political animals — on the same basis as everyone else.  Thinking very hard (you probably smelled the smoke from where you are), we concluded that — on the basis of human reason alone — that the rich are no different as human beings than any other human beings. 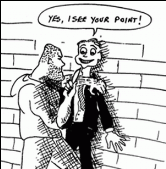 The conclusions we draw from this astounding finding are . . . astounding.  We can’t go after someone just because he or she is rich.  If a rich person has committed a crime, yes — but being rich is not a crime, or (at least) if it is a crime, it is the result of an inherently unjust law that contradicts common sense, shifting from lex ratio (“law is reason”) to lex voluntas (“law is will”) — positivism, which leads to pure moral relativism, even nihilism, and directly to the conclusion that “Might Makes Right.”
Rightly speaking, a rich person doesn’t have to prove innocence.  We have to prove guilt . . . and no amount of insinuation, supposition, assumption, sophistry, or Just Plain Envy proves guilt.  You need not only empirical evidence pointing to someone’s guilt, but also a logical argument.
Thus, you can’t say, “That greedy bastard is rich.  You can only get rich by stealing from poor people.  Therefore he or she is guilty and must be punished.”
That is one terrible argument.  Why?
Greed?  It’s a sin, not a crime, and you couldn’t prove it in any event.  Whether or not something is a sin is — or should be — irrelevant in human law.  A sin is a violation of moral or religious law, not human law.
Trying to make everything immoral into a crime (a crime being an offense against the State) is a BIG mistake, as Aquinas pointed out in “Question 96, Article 2” of the treatise on law in the Summa Theologica,
“Now possibility or faculty of action is due to an interior habit or disposition: since the same thing is not possible to one who has not a virtuous habit, as is possible to one who has. Thus the same is not possible to a child as to a full-grown man: for which reason the law for children is not the same as for adults, since many things are permitted to children, which in an adult are punished by law or at any rate are open to blame. In like manner many things are permissible to men not perfect in virtue, which would be intolerable in a virtuous man.
“Now human law is framed for a number of human beings, the majority of whom are not perfect in virtue. Wherefore human laws do not forbid all vices, from which the virtuous abstain, but only the more grievous vices, from which it is possible for the majority to abstain; and chiefly those that are to the hurt of others, without the prohibition of which human society could not be maintained: thus human law prohibits murder, theft and such like. . . .
“The purpose of human law is to lead men to virtue, not suddenly, but gradually. Wherefore it does not lay upon the multitude of imperfect men the burdens of those who are already virtuous, viz. that they should abstain from all evil. Otherwise these imperfect ones, being unable to bear such precepts, would break out into yet greater evils: thus it is written (Psalm 30:33): ‘He that violently bloweth his nose, bringeth out blood’; and (Matthew 9:17) that if ‘new wine,’ i.e. precepts of a perfect life, ‘is put into old bottles,’ i.e. into imperfect men, ‘the bottles break, and the wine runneth out,’ i.e. the precepts are despised, and those men, from contempt, break into evils worse still.”
In plain English?  Just because you think you’re perfect (and who made that determination?), it’s just not reasonable — and law is reason — to expect everybody else to be as perfect as you are.  Forcing people to be perfect on your terms and backing it up with the coercive power of the State isn’t practical in any event.  Either people get discouraged and give up trying to live up to your high standards, or they rise up and hang you from the lamppost.  And that is the case whether we’re talking the liberal or the conservative agenda.
You can only get rich by stealing from the poor?  First off, if they’re poor, what have they got to steal?  And theft is the only way to get rich?  Logically, that turns having any amount of wealth at all into theft.  It also makes accepting gifts or getting an inheritance, or being paid wages, or anything else, theft.
Consider: if all human beings are as fully human as all other human beings as human beings, “rich” and “poor” are only differences in degree, not in kind.  You may be a poor human, you may be a rich human, but you’re still human.
Logically then, having one cent is in human terms qualitatively no different than having a billion dollars.  Quantitatively, yes, there’s a gigantic difference — but considering the wealth holder in purely human terms, whether one has one cent, or a billion dollars is a difference it makes no difference.  It is not “right” to have one cent because you have one cent, any more than it is “wrong” to have a billion dollars just because you have a billion dollars.
“Ah,” smirks the Christian socialist, “but we have Jesus’s word that the rich are different!  I will quote a Bible verse to prove it!”  Have you ever noticed that both Christian socialists and Christian capitalists always have a Bible verse handy that just happens to prove everything they’ve been saying, and justifies it?
And again I say unto you, It is easier for a camel to go through the eye of a needle, than for a rich man to enter into the kingdom of God.  (Matt. 19:24) 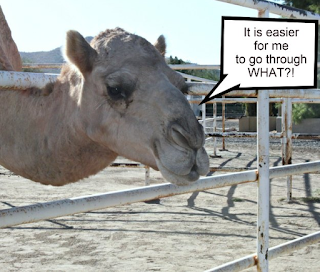 “See?” the Christian socialist exclaims.  “Jesus said so, right there.  The rich are different, and can’t go to heaven!  Being rich is a sin!  That proves I’m right!”
Yes, but what if I am not Christian?  Are you saying that truth is different for Christians and non-Christians?  This violates the first principle of reason whatever your faith, and is therefore invalid.
Let’s ignore for the sake of the argument, however, the fact that even for Christians the only thing you can prove from the fact that something is in the Bible is the fact that something is in the Bible.  What that something means is a matter of faith — the Bible is a book written by believers, for believers.
The interpretations of believers are simply not relevant to non-believers, any more than the personal interpretations of Christians who take the Bible as the sole rule of faith are valid for those who accept an official interpretation given by some authority.  This applies to all areas of expertise.  Should an accountant accept the non-accountant’s accusation that the accountant is engaged in a conspiracy against the human race simply because the non-accountant puts a personal interpretation on the “accounting equation” (Assets = Liabilities + Owners Equity) that contradicts the accounting meaning put on those terms?
#30#
Posted by Michael D. Greaney at 6:00 AM