Do We Need the Rich?, IV: How Past Savings Enslaves

Most people today simply take for granted that the only way to finance new capital formation — and thus widespread capital ownership — is through past savings.  That means that you need someone or something who is so rich that he, she, or it can afford to finance new capital formation without having to suffer for it, and the more expensive capital becomes as technology advances, the richer they have to be. 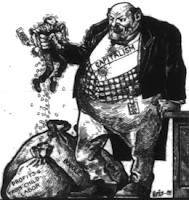 To the greedy capitalist, of course, that means that you need a small number of very rich (and very favored by God) people who cannot possibly consume all of their income and are pretty much forced to reinvest the excess.  In the capitalist myth, this creates jobs for non-owners, and generates the income the State taxes in order to fulfill its role in protecting the life, liberty, and property . . . of the rich.
To the envious socialist, it means that you need the State (very favored by God when it isn’t itself construed as the Deity) to own everything because you can’t trust private individuals to do what is right . . . but you can trust a bureaucrat to do the right thing every time . . . right?

But, seriously, folks. . . .
The fact is both the capitalists and the socialists are wrong — not just in where they put power, but in their basic assumption that you can only finance new capital formation by cutting consumption and accumulating money savings.  Both groups seem to think it is God’s (or the State’s) Will (as interpreted by both capitalists and socialists) that only a tiny elite own capital — and remember, as Louis Kelso pointed out, “ownership” and “control” are the same in all codes of law.
Of course, it makes little difference to the propertyless peon that under capitalism it’s a small private élite, under socialism it’s a small State élite, and under the Servile State it’s a small private/public élite that shifts back and forth from the private sector to the public sector, depending on which one is most effective at imposing a servile condition on the great mass of people. 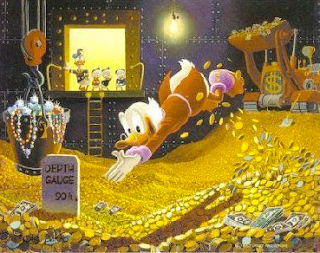 The fact is that the justification for both capitalism and socialism is the presumed necessity of past savings in order to finance new capital formation.  Once that pillar of both systems is kicked out, both systems fall of their own dead weight.  You don’t have to attack anybody.  All you have to do is free human beings from the slavery of savings, as Kelso and Mortimer Adler put it in the subtitle of their second collaboration, The New Capitalists (1961): “A Proposal to Free Economic Growth from the Slavery of Savings.”
Now, this does not mean that you reject savings.  It is, after all, impossible to finance new capital formation without savings.  It just means that human beings should be in charge, not savings, i.e., savings are supposed to serve the needs of human beings; human beings aren’t supposed to serve the needs of savings.
To explain, past savings imposes “the slavery of savings” by depriving some or all people of rights to achieve the presumably greater good of an adequate and secure income . . . which oddly never seems to be either adequate or secure in capitalism or socialism.  Capitalism does this by depriving most people of the right to own capital, while socialism does this by depriving all people of the right to own capital.
(Yes, there are forms of socialism that permit private ownership, but private property is a natural right, not a prudential gift from the community; rights are inherent in human beings, not the abstraction of the collective, a human creation.)
In this way “society” or “the economy” (never human beings) has enough savings to finance new capital formation.  This is because the capitalist simply cannot consume all his or her income and reinvests it, presumably creating jobs, while the State in socialism can reinvest exactly what is needed because considered as a producer it doesn’t have to consume at all.
In both cases consumption and production are separated, either partially as in capitalism, or completely as in socialism.  This throws Say’s Law into a cocked hat, for in the classical banking principle school of economics, consumption and production must be directly linked through private property, so that (at least in aggregate) total production and total consumption are equal.
Problem: if past savings is the only source of financing for new capital formation, then production must exceed consumption, or there won’t be any savings!  This, in turn, means either a private élite that owns so much capital it can’t consume everything and necessarily reinvests, or a State élite that can simply redistribute by stealing from the poor to give to the rich . . . or something like that.
All the contradictions of modern economic theory comes from the slavery of past savings, either trying to circumvent it, or avoid the consequences of an economic theory built on the assumption that waste — an excess of production over consumption or the production of goods not meant to be consumed — is essential if there is to be new capital formation.
Is there an answer?  Yes.  It’s called saving in the future to finance new capital formation now — and we’ll look at it tomorrow.
#30#
Posted by Michael D. Greaney at 6:00 AM