This has been a relatively quiet week for those of us not involved in stock market speculation on the Wall Street high stakes gambling casino.  By the way, if you ever want to make an enemy for life, tell someone a truth he or she doesn’t want to hear . . . and then be proven right (especially about the stock market).


On to the news items: 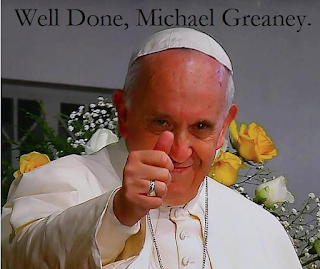 • We are still working out the details needed to launch a major fundraising drive to get the resources for our somewhat unofficial Justice University publishing program to translate a number of significant articles (e.g., “Pope Francis and the Just Third Way”) and other material that present concepts that are key to solving the increasing number of crises in the world.  This will be geared toward obtaining grants from foundations, and not from the general public, at least at this stage, and not for at least a year and a half.  This will almost certainly be launched before the end of our fiscal year on September 30, and we could be seeing results as early as January of 2016.  Of particular interest will be CESJ co-founder William J. Ferree’s key pamphlet Introduction to Social Justice (1948), and the Just Third Way Edition of Fulton Sheen’s Freedom Under God (1940).  We’re starting small, though, to test the waters, so to speak, and are looking initially at more translations of “Pope Francis and the Just Third Way” and the paper on the Greek debt crisis currently being edited by an official with the National Bank of Poland, scheduled for publication in September.  We're also thinking about an actual "Justice University Press" imprint.  After all, (almost) all universities have their own presses, right?  Even that small-time operation in . . . where was it?  Oh, yes, Oxford, U.K.

• CESJ Fellow Jean-Marie Bukuru is back at CESJ headquarters, having a series of meetings with officials at the World Bank and other agencies, both private and public.

• On Tuesday, the CESJ core group had a dinner meeting with Mr. Brian Corbin, Senior Vice President for Social Policy for Catholic Charities USA.  It’s tempting to report that “a good time was had by all” (which has the advantage of being perfectly true), but that doesn’t convey the importance of the meeting.  Although nothing earthshaking was accomplished, relationships were built, and some very important possible contacts and key projects were identified.  By coincidence, Brian is also involved in the upcoming World Meeting of Families, although he will not be attending due to the logistics of the pope visiting Washington, DC.

• As of this morning, we have had visitors from 46 different countries and 49 states and provinces in the United States and Canada to this blog over the past two months. Most visitors are from the United States, Canada, the United Kingdom, the Netherlands and Australia. The most popular postings this past week were “Halloween Horror Special XIII: Mean Green Mother from Outer Space,” “Let’s Talk About Retirement, II: Social Security,” “Minimum Wage or Profit Sharing,” “Thomas Hobbes on Private Property,” and “The Population Bomb.”