As of this writing, the Dow is dropping like a stone.  If you believe that the secondary market is in any way related to reality, don’t worry.  “They” (meaning the people who control money and credit) will take steps to “reflate” (as Irving Fisher put it) the money supply to continue shifting purchasing power away from producers and toward speculators, gamblers, and the non-productive . . . after they’ve taken their profits from short-selling, of course. . . . 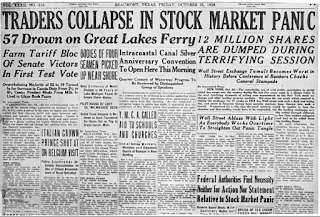 If you believe that we should be ignoring the antics on Wall Street or any of the other gambling casinos because they have practically nothing to do with the real, productive sector of the economy, be very worried.  “They” will take steps to “reflate” the money supply under the illusion that “they” are solving the problem instead of making it worse.

• We are almost ready to launch a major fundraising drive to get the resources to translate a number of significant articles (e.g., “Pope Francis and the Just Third Way”) and other material that present concepts that are key to solving the increasing number of crises in the world.  This will be geared toward obtaining grants from foundations, and not from the general public, at least at this stage, and not for at least a year and a half.  This will almost certainly be launched before the end of our fiscal year on September 30, and we could be seeing results as early as January of 2016. 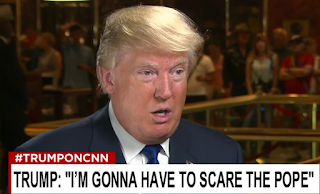 • Donald Trump says he’s going to scare Pope Francis because he (Trump) doesn’t like the way the pope talks about capitalism.  Trump is going to look the pope straight in the eye and deliver the astounding message that “ISIS wants to get you.”  The astounding part of this message is that Trump thinks this is somehow news to Francis, or that threatening someone with a greater evil to make them accept a lesser evil is somehow sound tactics or attractive to an institution that has been under constant attack since its founding.  One is reminded of the semi-humorous “Chuthulu for President” campaign that restarts every four years that has the slogan, “Why Choose the Lesser Evil?” — “Chuthulu” being H.P. Lovecraft’s thing of ultimate evil from between universes (we won’t comment on the logical errors that abound in the concept) bent on taking over the world and enslaving humanity.

• We haven’t done the research, but yesterday the Dow Jones Industrial Average (which no longer contains any industrial stocks), considered a leading economic indicator because it lags behind lagging economic leaders, and presumably measures the primary productive sector by making guesses about the secondary speculative sector, experienced — in objective terms — one of the greatest drops in its history, $358.04, somewhere like 9 or 10 on the list.  (The single largest to date was $777.68 on September 29, 2008.)  Not to worry, though.  Due to inflation and the flexible standard of the U.S. dollar, the drop is not the disaster it would have been when the dollar was convertible into gold at $20.63 per ounce as in 1929.  Today gold is around $1,150 per ounce.  Going solely by the price of gold, today’s dollar is worth less than one cent in 1929 money, or (to put it another way) $1 in 1929 would be worth $55.74 today in terms of gold.  Thus a drop of $358.04 in the Dow translates into less than $6.50 in 1929 terms as measured by gold — serious, but nothing really to get excited about.  Of course, on October 28, 1929, a $38.33 drop in the Dow was the second largest in Wall Street’s history in terms of percentage (12.82%), following the October 19, 1987 drop of $508.00, or 22.61%.  This would all be moot if, as we have said many times before, we implemented a Capital Homesteading program with the monetary and tax reforms required, which would turn all this around in 18 to 24 months.

• As we expected (but didn’t say, lest we jinx the situation and, like a Greek tragedy, bring about the very situation we tried to avoid), the prime minister of Greece has resigned.  The message is clear: austerity without a viable plan to make every child, woman, and man productive may be essential, but it offers no light at the end of the tunnel.  Why, after all, should anyone do what they know to be hopeless?  This might be true heroism as Edith Hamilton analyzed it in her study of the Norse myths about Ragnarok, but it’s no way to run a country or an economy.  Without Capital Homesteading or some other sort of economic democracy program based on financing new capital formation and broadened ownership with future savings instead of expanding government debt, the Greeks — and the rest of the world, for that matter — are in a hole they can’t get out of.

• As of this morning, we have had visitors from 44 different countries and 49 states and provinces in the United States and Canada to this blog over the past two months. Most visitors are from the United States, Canada, the United Kingdom, the Netherlands and Poland. The most popular postings this past week were “Halloween Horror Special XIII: Mean Green Mother from Outer Space,” “Let’s Talk About Retirement, II: Social Security,” “Thomas Hobbes on Private Property,” “Minimum Wage or Profit Sharing,” and “The Population Bomb.”