People these days talk a lot about the “sharing economy,” although no one seems to know exactly what that means.  Some of the articles we’ve seen take the approach that the rich should share what they have with the poor, while others that the poor should share what they have with other poor.  Either way, somebody seems to have to give up something in order for somebody else to have it; some people gain while others lose.


One proposal that doesn’t seem to fit into the sharing economy is wages.  The long-standing push to implement higher and higher minimum wages in an effort to secure workers a living income isn’t pitched as the rich sharing what they have with the poor, but as the poor taking from the rich what belongs to the poor by right.  By right of what isn’t entirely clear, but that’s beside the point.

People tend to forget that the point of the Parable of the Workers in the Vineyard is that heaven is the equal reward of the virtuous (although the reward itself is not the same for everyone — the "many mansions" bit, remember?), not a theory of wage payment for business — the owner insists that it's his money, not the workers', and he can do with it what he will; it's not — repeat, not — what is due to the workers in justice.  If you think otherwise, reread it, and do so carefully.

The problem is that raising wages increases a business’s fixed costs.  There are no two ways about it.  If there are 100 man-hours of minimum wage work to be done, and the minimum wage is $15, the cost of having that work done is $1,500, no ifs, ands, or buts.  A business may shift hours around from more expensive workers to less expensive or more efficient workers, or find a robot to take the place of the human workers, but in the short run, as a rule, an increase in wages from $10 to $15 per hour is going to increase the cost of labor by 50%, or (in this example) from $1,000 to $1,500 for 100 man-hours of work.

Minimum wage advocates are finding a form of job security in proving that raising the minimum wage has no adverse effects, only benefits.  Others, opposed to increases in wages with no corresponding increase in worker productivity, are equally adept at proving that there are only adverse effects.  The bottom line, however, remains unchanged . . . or, rather, the bottom line is changed . . . and not for the better.

Raising wages increases the fixed cost of doing business.  If you need 100 man-hours to get X units of production, then a 50% increase in fixed costs makes the company less competitive with companies that did not increase wages . . . say, in Canton, China, for example, which might already be getting X units of production out of 50 man-hours at a cost of 75¢ per hour.

Plus, everything else being equal, suppose the economy has a downturn and you don’t sell X units of production.  You only sell 2/3 of X.  That’s two-thirds the revenue with which to cover fixed costs, including the increase in wages, formerly at 2/3 the current level.  Don’t have the money?  There’s an easy solution: it’s called “bankruptcy.”

We could go on, but it should be evident that, everything else being equal and no adverse effects, an increase in wages at best results in the worker breaking even.  When costs increase, producers have to raise prices, or go out of business by not making enough profit.  These costs thereby get passed on to the consumer . . . who is the worker, causing him or her to pay more for the same thing.

The real solution to the wage trap is to turn workers into owners, so that they can produce with both labor and capital.  This also entitles them to a share of profits commensurate with their respective ownership stakes.  If workers (or anyone else) purchases shares in a company and pays for them with future profits (dividends), widespread ownership can be accomplished without taking one cent out of existing savings, or reducing take-home pay by a single dime.

What about the short term, during which profits are being used to repay capital acquisition loans?  In the short term, workers can be paid what they need to survive as a fixed wage, but with a variable portion based on the company’s profitability.  This would enable a company to lower costs and thus prices, and probably sell more product, thereby increasing profits.  A portion of these profits could be paid to workers as a variable portion of their compensation package, in addition to the dividends they receive that are being used to purchase the shares in the company.

The advantage to this is that it would make the company more profitable as well as more financially secure.  If sales fell and the company did not meet its profit goal, compensation could be temporarily reduced without violating any contracts, renegotiations, or bankruptcy.  Instead, everybody would take a temporary cut in pay as a matter of course, knowing that it would be made up naturally when the company became profitable again. 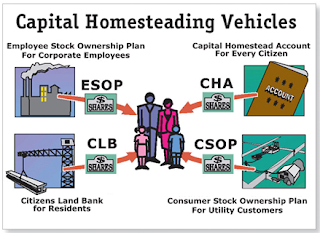 Of course, that is a short-term solution.  Under Capital Homesteading, we estimate that the economy would turn around in approximately 18-24 months, reaching full employment within 3-5 years.  Assuming that the typical acquisition loan was paid off in 9-10 years, there would be massive infusions of new demand entering the economy almost from the inception of a program.  This would greatly increase profits, and — assuming a reasonable share of those profits were distributed in a profit-sharing program — ensure that a worker’s variable compensation would probably exceed the fixed portion . . . and further increase demand in the economy.

It thus makes sense to stop demanding increases in fixed wages, and start agitating for ownership — and profit sharing.  Let’s move to a real sharing economy in which everybody benefits and no one is harmed.