Okay, Commander Rob W., this one’s for you.  Cindy will really appreciate it . . . or really get angry, this time.  This week people have been commemorating the dropping of the atomic bomb on Hiroshima seventy years ago.  (We note in passing that we don’t recall anyone saying anything a few years back when the seventieth anniversary of the bombing of Coventry in November of 1940 came around.)


Most, if not all, of the commentary, speeches, articles, and so on, have quite properly focused on making peace the preferred option instead of war, and in eliminating nuclear weapons.  The problem is that simply mandating something rarely makes it happen.  You have to remove the underlying cause(s) of something in order to be truly effective at reform.

That’s the whole point of social justice.  You don’t focus on removing the problem per se.  Instead, you focus on reforming the flawed institution(s) that resulted in the problem.  Thus, if you want to raise people’s incomes, you don’t just give them money, although that may be necessary as an expedient in the short term.  Instead, you remove whatever barrier is preventing people from becoming productive and deriving an income from providing a marketable good or service.

Similarly, you may forbid the use of nuclear weapons, but that only works in the short term, and then only if you have the ability to prevent people from using nuclear weapons.  The only way to prevent the use of nuclear weapons effectively, however, is to take away the reasons people would even consider using them . . . and we don’t mean by surrendering or wiping Israel off the face of the earth, either.  You make it possible for people to mind their own business, and open up access to the means whereby they have business to mind: 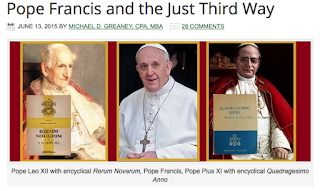 • As we noted last week, CESJ’s article that appeared this past June in Homiletic and Pastoral Review, “Pope Francis and the Just Third Way”, has been translated into Spanish, formatted, and sent to a number of key people in the Spanish-speaking world.  It is available both as a stand-alone piece and in a dual language version in .pdf.  The anticipated Portuguese translation fell through due to unexpected circumstances, but a team has committed for the French.  The French translation should be ready by the end of September at the earliest.

• The article by CESJ’s Director of Research, “Justice Without Rights?”, has excited some interest.  Not as much as the latest article on an unrelated subject (“The Satire of Msgr. Robert Hugh Benson”), but some.  The article focuses on some odd comments made by Vatican advisor Dr. Jeffrey Sachs that hinted Pope Francis might have problems with Americans’ adherence to their natural law rights of life, liberty, and property.  Since these are also at the heart of Catholic social teaching, it is unclear why Dr. Sachs believes that Pope Francis would have a problem with them. 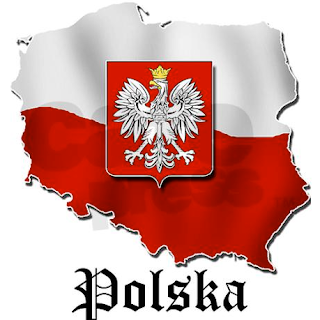 • This past Wednesday we heard from an official with the National Bank of Poland who requested permission to shorten, edit, and translate into Polish the recent blog series on the Greek debt crisis for publication in an economic journal.  We are exploring the possibility of translations into Spanish, French, and Japanese once an edited English version is ready.  Interest has already been expressed in using a French translation to provide the nascent resistance movement in Burundi with a specific program to counter the recent usurpation of power by the president, and in circulating an English version at the World Bank.

• As of this morning, we have had visitors from 47 different countries and 48 states and provinces in the United States and Canada to this blog over the past two months. Most visitors are from the United States, the United Kingdom, Canada, Poland, and India. The most popular postings this past week were “Halloween Horror Special XIII: Mean Green Mother from Outer Space,” “News from the Network, Vol. 8, No. 28,” “Solving the Greek Debt Crisis, V: Presenting the Solution,” “Solving the Greek Debt Crisis, VIII: Specific Monetary Reforms,” and “Thomas Hobbes on Private Property.”