Last week we came across the following quote from Abraham Lincoln.  At least, that’s who it was attributed to, so we’ll take the internet’s word for it.  (The internet knows everything.)  Anyway, the (alleged) quote was, “America will never be destroyed from the outside.  If we falter and lose our freedoms, it will be because we destroyed ourselves.” 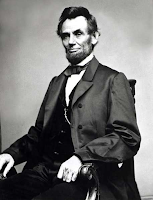 Perhaps not coincidentally, that was pretty much William Crosskey's analysis in Politics and the Constitution in the History of the United States (1953).  It is also, not coincidentally, that of Alexis de Tocqueville in Democracy in America (1835, 1840) and — what baffles many people today — seems to have been that of Pope Leo XIII. As de Tocqueville commented in the conclusion of Vol. II,

“The object is not to retain the peculiar advantages which the inequality of conditions bestows upon mankind, but to secure the new benefits which equality may supply. We have not to seek to make ourselves like our progenitors, but to strive to work out that species of greatness and happiness which is our own. For myself, who now look back from this extreme limit of my task, and discover from afar, but at once, the various objects which have attracted my more attentive investigation upon my way, I am full of apprehensions and of hopes. I perceive mighty dangers which it is possible to ward off--mighty evils which may be avoided or alleviated; and I cling with a firmer hold to the belief, that for democratic nations to be virtuous and prosperous they require but to will it. I am aware that many of my contemporaries maintain that nations are never their own masters here below, and that they necessarily obey some insurmountable and unintelligent power, arising from anterior events, from their race, or from the soil and climate of their country. Such principles are false and cowardly; such principles can never produce aught but feeble men and pusillanimous nations. Providence has not created mankind entirely independent or entirely free. It is true that around every man a fatal circle is traced, beyond which he cannot pass; but within the wide verge of that circle he is powerful and free: as it is with man, so with communities. The nations of our time cannot prevent the conditions of men from becoming equal; but it depends upon themselves whether the principle of equality is to lead them to servitude or freedom, to knowledge or barbarism, to prosperity or to wretchedness.”

That’s interesting, of course.  What is more interesting, however (especially to the monarchists amongst us), is that Pope Pius XI seems to have been familiar with de Tocqueville’s analysis of democracy in America — and approved of it.  Given the work of Father William J. Ferree, S.M., Ph.D., and looking at the act of social justice from that perspective, Pius XI may have seen in Democracy in America an example of social justice in action.

We can’t prove this, of course (at least, not until we get access to the Vatican archives and learn to read Italian . . . not necessarily in that order), but the hallmark of the act of social justice according to Father Ferree is organizing for the common good.  This was (again according to Ferree) why Pius XI stressed freedom of association so much: you can’t organize effectively unless you are allowed to organize freely . . . and the translation we’re using has the word “association” nearly forty times, all in contexts that either state outright or imply freedom to organize.  As he said in Quadragesimo Anno,

“87. Moreover, just as inhabitants of a town are wont to found associations with the widest diversity of purposes, which each is quite free to join or not, so those engaged in the same industry or profession will combine with one another into associations equally free for purposes connected in some manner with the pursuit of the calling itself. Since these free associations are clearly and lucidly explained by Our Predecessor of illustrious memory, We consider it enough to emphasize this one point: People are quite free not only to found such associations, which are a matter of private order and private right, but also in respect to them ‘freely to adopt the organization and the rules which they judge most appropriate to achieve their purpose.’ The same freedom must be asserted for founding associations that go beyond the boundaries of individual callings. And may these free organizations, now flourishing and rejoicing in their salutary fruits, set before themselves the task of preparing the way, in conformity with the mind of Christian social teaching, for those larger and more important guilds, Industries and Professions, which We mentioned before, and make every possible effort to bring them to realization.”

Read that passage again carefully, and not just to count the number of times Pius XI stressed freedom of association.  Now compare it with the following passage from Democracy in America, I.xii:

“In no country in the world has the principle of association been more successfully used, or more unsparingly applied to a multitude of different objects, than in America. Besides the permanent associations which are established by law under the names of townships, cities, and counties, a vast number of others are formed and maintained by the agency of private individuals.

“The citizen of the United States is taught from his earliest infancy to rely upon his own exertions in order to resist the evils and the difficulties of life; he looks upon social authority with an eye of mistrust and anxiety, and he only claims its assistance when he is quite unable to shift without it. This habit may even be traced in the schools of the rising generation, where the children in their games are wont to submit to rules which they have themselves established, and to punish misdemeanors which they have themselves defined. The same spirit pervades every act of social life. If a stoppage occurs in a thoroughfare, and the circulation of the public is hindered, the neighbors immediately constitute a deliberative body; and this extemporaneous assembly gives rise to an executive power which remedies the inconvenience before anybody has thought of recurring to an authority superior to that of the persons immediately concerned. If the public pleasures are concerned, an association is formed to provide for the splendor and the regularity of the entertainment. Societies are formed to resist enemies which are exclusively of a moral nature, and to diminish the vice of intemperance: in the United States associations are established to promote public order, commerce, industry, morality, and religion; for there is no end which the human will, seconded by the collective exertions of individuals, despairs of attaining.”

We don’t know about you, but we see what appears to be a clear parallel between the two passages.  It’s something to think about, anyway.