How to Cause (and Cure) a Great Depression

The recent frenzy in the world’s stock markets had a number of people panicking about the possibility of (yet) another crash of the magnitude of October 1929, and the possibility of another Great Depression on the heels of the Great Depressions of 1873-1878, 1893-1898, 1930-1940, etc., etc., etc. . . . although we don’t call them “depressions” now, but “recessions” ‘cause “depression” is too scary and makes the government look bad.


Is it, however, correct to say that the Crash of 1929 caused the Great Depression of 1930-1940?  Or are there other factors that the Keynesian powers-that-be ignore or overlook?  Let’s think about that a moment.

The fact is that, in terms of real economic growth, the ups and downs of the secondary stock market are meaningless.  In 1936, when he predicted the “depression within the depression,” Dr. Harold G. Moulton noted that the Crash of 1929 did not cause the Great Depression of 1930-1940.

The number one rule in business and commerce is “confidence,” another way of saying contracts — promises — are sacred; “Let your yes mean yes, and your no mean no” (Matt. 5:37) is (if you’re a Christian) God’s way of telling you to keep your word.  “Anything beyond this is from the Evil One.”  If you don’t trust the people you’re doing business with, you can’t do business.

Another word for trust — confidence — in economics and finance is “creditworthiness.”  As Charles Morrison, a nineteenth century investment banker pointed out in An Essay on the Relations Between Labour and Capital (1854) advocating widespread capital ownership,

Confidence and credit are only moral elements in society; they may be said to be, to a great extent, mere matters of opinion; yet their importance in the production and distribution of wealth is so great, that the whole machinery of material production is kept at work, disordered, or paralyzed, according as these principles act in a healthy manner, irregularly, or not at all. They are to our industrial community what the nervous system is to the body, a slight and sensitive substance in itself, but the indispensable cause of all the life and motion of the system. A great nation may possess in abundance all the means of producing wealth, — population, intelligence, capital, natural and artificial instruments of production; and yet, if credit and confidence should be from any cause destroyed, all these resources seem to have lost their virtue, and general distress prevails. Let confidence and credit be restored, and the whole system is immediately set in motion again, and in a very short time general prosperity returns. (Charles Morrison, An Essay on the Relations Between Labour and Capital. London: Longman, Brown, Green, and Longmans, 1854, 200.)

The result?  Instant uncreditworthiness.  Banks stopped lending, and even began calling existing loans from borrowers whose collateral had declined in value below what was required in the loan covenant.

In all cases effective demand plummeted, business contracted even further, another round of bankruptcies, layoffs, and pay cuts occurred, and by February 1932 the country was in a full blown depression.  Because of the stock market crash?  No, because there was no substitute for traditional forms of collateral. 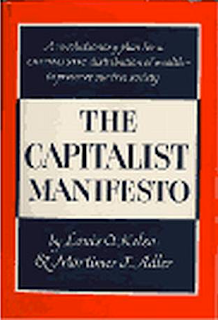 This is why a key component in Capital Homesteading is the replacement of traditional forms of collateral with capital credit insurance and reinsurance, as Louis Kelso proposed in both of the books he co-authored with Mortimer Adler, The Capitalist Manifesto (1958) and The New Capitalists (1961).  The latter book especially focused on the need for capital credit insurance.  Given that the primary use of past savings is collateral, not direct reinvestment, the subtitle to The New Capitalists has a world of unexpected meaning: “A Proposal to Free Economic Growth from the Slavery of Savings.”

Had businesses in 1930 been able to replace their traditional collateral with insurance policies, there would have been no Great Depression.  There would have been a moderate downturn due to some other factors unrelated to the Crash.  These, however, were short term, e.g., some overcapacity in housing construction and consumer durables production and so on, but nothing particularly serious.

If today’s powers-that-be want to “stimulate recovery,” they need to figure out a way for banks to start lending to businesses to finance new capital formation instead of to pour into stock market speculation.  Capital Homesteading is one way.