Félicité de Lamennais and the “Theory of Certitude”

As we saw in the previous posting on this subject, l’abbe Hugues Félicité Robert de Lamennais and two friends, Charles Forbes René de Montalembert and Jean-Baptiste Henri Dominique Lacordaire, calling themselves “the Pilgrims of God and Liberty” had gone to Rome in the early months of the pontificate of Gregory XVI to meet with him and get a papal endorsement of their activities.

The trio actually got to meet with the pope, and received permission to continue their work — as long as they toned down the political rhetoric — but that was not enough for de Lamennais.  He wasn’t after permission, but enthusiastic support for his work and his theories.

The problem was that de Lamennais’s theories were not exactly in conformity with Catholic doctrine or with common sense, to say nothing of sound democratic political philosophy.  It’s a little complicated and mixed up with de Lamennais’s gigantic ego.  This is illustrated by Alexis de Tocqueville, who had a run-in with de Lamennais years later when de Lamennais sabotaged a legislative measure that they both wanted because demanded that it be discussed in the morning instead of the afternoon.

Consequently, de Lamennais refused to take the pope's “yes” for an answer.  Montalembert and Lacordaire eventually went home to France, but de Lamennais insisted on staying in Rome until the pope changed his mind and endorsed de Lamennais’s theories.

But it was de Lamennais’s theories that were the problem, not the pope’s intransigence, specifically his “theory of certitude.”  This requires a little explanation.  (Okay, a lot of explanation, but we’ll try and make it as painless as possible.)

It seems that early in life, de Lamennais had imbibed a second-hand Neo-Platonism that later surfaced in his “theory of certitude.”  Similar to the unorthodox spirituality of the Medieval Fraticelli, this theory of certitude was a kind of sensus communis, an appeal to the universal testimony of the human race by faith instead of by reason in discerning religious truth. (Spencer, Politics of Belief in Nineteenth-Century France, op. cit., 39-40.)

In the course of a varied career, de Lamennais managed to attack, outrage, or annoy just about everyone from Napoleón Buonaparte to Pope Leo XII.  While Leo XII, who at first favored de Lamennais’s theories, treated him kindly and even thought about making him a cardinal, he reconsidered after gaining personal experience of de Lamennais.

As the pope said, “He is an esaltato, a distinguished man of talents, knowledge, and good faith.  But he is one of those lovers of perfection who, if one should leave them alone, would overthrow the whole world.” (Dudon, Lamennais et le Saint-Siège (Paris, 1911), p. 29; quoted in Heinrich Rommen, The State in Catholic Thought: A Treatise in Political Philosophy. St. Louis, Missouri: B. Herder Book Co., 1947, 436n.)

Like the Blues Brothers, De Lamennais believed himself to be on a mission from God.  He had taken his recovery from a serious illness in 1828 as a sign that his life had been spared in order to be God’s special instrument to restore the Church, the prophet (so to speak) of Neo-Catholicism.  De Lamennais therefore rejected all forms of monarchy in favor of a democratic socialist theocracy.

Two years later, in 1830, possibly inspired by Traditi Humilitati Nostrae, the encyclical of Pope Pius VIII (Francesco Saverio Castiglione, 1761-1830, elected 1829) on indifferentism (that pope’s only encyclical), de Lamennais started l’Avenir (“The Future”), a journal with the motto, “God and Liberty.”  With the help of Montalembert, de Lamennais also founded l’Agence Générale Pour la Défense de la Liberté Religieuse, with the mission of exposing violations of religious liberty . . . as HE defined it. 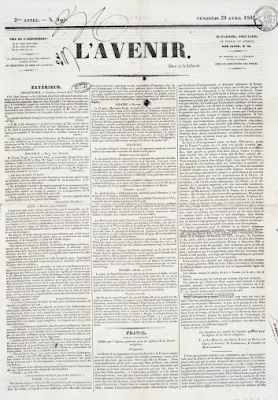 In that connection, l’Avenir demanded complete freedom for the Catholic Church from any form of civil domination or control, which de Lamennais considered the source of the problems in the Church.  It was also dedicated to promoting extreme, atomistic democratic views on civil rights and a socialist economy.  As Montalembert later noted,

"To new and fair practical notions, honest in themselves, which have for the last twenty years been the daily bread of Catholic polemics, we had been foolish enough to add extreme and rash theories; and to defend both with absolute logic, which loses, even when it does not dishonour, every cause." (Montalembert, from his Life of Lacordaire, quoted by John Henry Cardinal Newman, “Note on Essay IV., The Fall of La Mennais,” Essays Critical and Historical.  London: Longmans, Green, and Co., 1897, 173-174.)

Unfortunately, there were some serious problems with de Lamennais’s thought in addition to his radical political views.  These were greatly exacerbated by his excitable personality and impressionable mind.  Something was true for him because he believed it, not because it could be proved logically or empirically.  Consequently, once he set himself on a course of action, he could rarely be persuaded to change his mind, even if it was in his own best interest.  He tended to act precipitously and then refuse to reconsider, however inimical his actions to himself and to others.

De Lamennais tended to turn trivialities into major incidents whenever possible, as de Tocqueville related.  This made dealing with even minor problems virtually impossible, to say nothing of trying to correct fundamental errors, or even identify them through the barrage of de Lamennais’s hysterical and self-serving accounts of his alleged persecution by religious and civil authorities.

At the heart of de Lamennais’s revision of Christianity, though, was his “theory of certitude.”  In this theory, de Lamennais dismissed individual reason and claimed that truth resides only in the general reason as the result of direct revelation from God.  Consequently, something is true because someone believes it; it is not believed because it is true.  This requires a central religious authority to determine truth and communicate it to believers.

Truths such as the existence of God and the content of the natural law cannot, therefore, be known by the operation of individual reason on the evidence of the senses guided by faith, but only by accepting on faith the authority of humanity as a whole.  As with the thought of Siger of Brabant and William of Ockham, de Lamennais’s theory of certitude meant that the truths of faith and the truths of reason could contradict one another.

This, as Montalembert recalled years later, seriously hampered the goal of promoting true liberty in a way that respected individual human dignity and sovereignty by making a virtual mockery of democracy.  As he said,

Our task was further compromised in the eyes of the clergy, on the one hand, by M. de la Mennais’ philosophical system on Certitude, which he pretended to make the basis of his politics, as well as of his theology; and, on the other, by the excessive Ultramontanism of that great writer, and his first disciples. (Montalembert, from his Life of Lacordaire, quoted by John Henry Cardinal Newman, “Note on Essay IV., The Fall of La Mennais,” Essays Critical and Historical.  London: Longmans, Green, and Co., 1897, 174.)

Ultimately contradicting de Lamennais’s own position on individual sovereignty, the theory of certitude was essentially a restatement of Plato’s error that ideas exist independently of the human mind.  It also led inevitably to the socialist idea that God grants rights to the collective, which then grants them to actual human beings as expedient.  This was a theory Pius XI would condemn a century later as “utterly foreign to Christian truth” (Quadragesimo Anno, § 117) and refute by pointing out that “[o]nly man, the human person, and not society in any form is endowed with reason and a morally free will.” (Divini Redemptoris, § 29.)

De Lamennais’s Neo-Catholic contribution to socialist theory was to insist on the exaggerated ultramontane belief that the Catholic Church in the person of the pope instead of the State should decide what truth is and what rights people should have.  This belief has continued to pervade various forms of religious socialism and modernism down to the present day, with the leaders or prophets of different sects and faiths substituted for the pope when necessary.

By rejecting all non-democratic forms of government and making the Church, a religious authority, the final authority on civil rights, de Lamennais effectively replaced justice, the highest civil virtue, with a distorted form of charity, the highest religious virtue.  This confused the natural and the supernatural, greatly strengthening the case for religious or Christian socialism based on a pseudo charity that tries to take the place of justice.  It did not, however, weaken secular or scientific socialism based on distorted justice that tries to take the place of charity.

De Lamennais’s theory of certitude also led to his development of a theory of a universal religion as the logical end of Neo-Catholicism.  In the universal religion, truth is determined by consensus, not by reason or faith founded on the natural law discerned by reason.  The true religion, therefore, is the one that can produce the greatest number of witnesses, i.e., is the most popular or democratic.

Although de Lamennais's theories increased anti-Catholic bigotry and fueled fears of the Whore of Babylon, this is clearly not true when construing the Catholic Church as an institution in society, as de Lamennais did.  According to Catholic tradition the institutional Church did not exist as such prior to Pentecost, while the organizational Church existed from the moment of Jesus’s commission to Simon Peter.

Nor was that all, as we will see in the next posting on this subject.