“All Products Will Have Become Services”

Analyzing the Great Reset is made more difficult by the fact that, like Pope Saint Pius X’s comment about modernism, it is presented “without order and systematic arrangement” (Pascendi Dominici Gregis, § 4) in a loose, even chaotic manner.  Rhetoric plays to the emotions, and goals are stated in vague terms that leave far too much to personal interpretation and imagination on the part of both adherents and opponents.

For example, let’s take a look at the item that headed the list of “takes on the world in 2030” from the “experts” of the Global Futures Councils in November 2016:

1. All products will have become services.  “I don’t own anything. I don’t own a car. I don’t own a house.  I don’t own any appliances or any clothes,” writes Danish MP Ida Auken.  Shopping is a distant memory in the city of 2030, whose inhabitants have cracked clean energy and borrow what they need on demand.  It sounds utopian, until she mentions that her every move is tracked and outside the city live swathes of discontents, the ultimate depiction of a society split in two. (World Economic Forum, 2017 Annual Meeting, “8 Predictions for the World in 2030,” https://www.weforum.org/agenda/2016/11/8-predictions-for-the-world-in-2030/, accessed February 20, 2021.)

Angry and frightened people reacted to this “take on the world” as might have been expected.  They took it as a clear and present danger to fundamental rights to life, liberty and private property that define each and every human being as a person by nature.  Dr. Antony Mueller of the Von Mises Institute, for example, published his opinion of what he believed to be the actual goal of the WEF, perhaps unconsciously changing more or less personal “takes on the world of 2030” to what he seems to have assumed are official projections:

According to the projections of the WEF’s “Global Future Councils,” private property and privacy will be abolished during the next decade.  The coming expropriation would go further than even the communist demand to abolish the property of production goods but leave space for private possessions.  The WEF projection says that consumer goods, too, would be no longer private property.

If the WEF projection should come true, people would have to rent and borrow their necessities from the state, which would be the sole proprietor of all goods.  The supply of goods would be rationed in line with a social credit points system.  Shopping in the traditional sense would disappear along with the private purchases of goods.  Every personal move would be tracked electronically, and all production would be subject to the requirements of clean energy and a sustainable environment. (Antony P. Mueller, “No Privacy, No Property: The World in 2030 According to the WEF,”  December 8, 2020, website of the Von Mises Institute, https://mises.org/wire/no-privacy-no-property-world-2030-according-wef, accessed February 20, 2021.)

Read carefully, of course, it appears that the World Economic Forum rejects Ida Auken’s “take on the world,” at least as stated.  Note that a qualifier is added, calling a further description of it, “the ultimate depiction of a society split in two.”  Significantly, however, the “take” is described approvingly as “utopian.”

Utopia, a term coined by Saint Thomas More meaning “Nowhere,” was the name of an imaginary country More used to satirize the follies of Tudor England.  People unfamiliar with the author’s personalist humanism (accurately, if semi-fictionally, depicted in Adrian Bolt’s play, A Man for All Seasons) have taken More’s satire as the blueprint for an ideal society. (Paul Turner, “Introduction,” Thomas More, Utopia, Translated by Paul Turner.  New York: Penguin Books, 1965, 13.)  This is despite (or possibly because of), e.g., the abolition of private property and money (Ibid., 61-67.), war for reasons other than self-defense (Ibid., 109-117), etc., and other thinly veiled aspects of Tudor England More found repugnant.

Other questions arise.  If the WEF truly rejected Auken’s “take,” why was it put on the list at all?  Why was it listed first?  Was it put on the list because it was so extreme?  Was the intention just to make the actual — albeit just as vaguely stated — goals seem much more palatable in contrast?  Are the “takes” tantamount to bargaining chips that the WEF does not really expect to achieve, but would gladly accept? 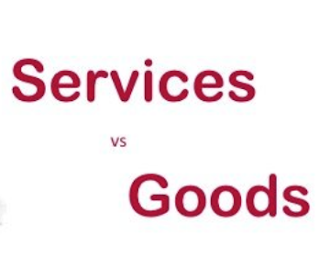 On a more practical level, what, exactly, does it mean to say that “all products will have become services”?  Services are already products, that is, productions, either by labor or by capital, a production being a marketable good or service.  Of course, this could merely be the result of sloppy thinking on the part of Auken, but deliberate or not, it reveals an essentially anti-personalist orientation.

Services and goods are distinguished in economic terms by the fact that a “service” is construed as a transaction in which no physical goods are transferred from the seller to the buyer; services are intangible.  In contrast, a “good” is an item that satisfies human wants and provides utility; goods are tangible.  Goods once produced are transferable, while services once performed are non-transferable.  To speak of all products becoming services makes no sense, as it confuses the natures of services and goods.