In the previous posting on this subject, we closed by noting that, if new capital formation cannot take place without savings (which have never not only not denied, but freely admit), and yet we’ve demonstrated beyond the shadow of any doubt whatsoever that existing savings cannot possibly account for the vast amount of capital that exists in the modern world, where on Earth did the financing come from?

As can be seen with a moment’s reflection, past reductions in consumption and future increases in production yield the same end result, although starting from opposite sides of the equation.  Past savings consists of unconsumed goods that can be turned into money, while future savings consists of unproduced goods that can be turned into money.  The only question is how each type of savings is converted into money. 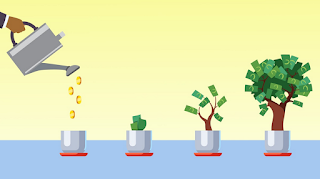 Money derived from past savings is properly used for consumption purposes only.  This is because the money represents (is backed by) the unconsumed production.  The process of turning inventories of unconsumed goods into money is highly technical and not directly relevant to this discussion.  It is, however, done every business day.

Money derived from future savings is properly used for investment purposes only.  By “investment,” we hasten to note, we mean only the purchase of assets intended to be used to create marketable goods and services for consumption.  We do not mean any form of consumption spending, such as buying a house, a car, or an education.  These are all consumption items as they do not directly generate income.

Of course, if the house is purchased as rental property, the car is used as a taxi, or someone is being paid to attend school, that is different.  Such things ordinarily considered consumption items can be considered investments.

Turning future savings into money is an even more highly technical process, and also not directly relevant to this discussion.  It is, however, the theory that underpins commercial and central banking.  The explanation gets very confused especially in our day and age when the different types of banks have been merged and mingled together so much that making sense of it is almost impossible except after years of study . . . which may be how and why Keynes was able to convince so many people of the validity of his system.  It is, after all, much easier for most people to accept a complicated, simple and straightforward fallacy than an extremely complicated, difficult and convoluted truth.

Now, as arcane and intricate as this sounds, Keynes added something else into the mix that rendered his system not merely counterproductive, but actually disastrous.  To explain, there are three major schools of economic thought that accept as unquestioned the belief that only past savings can be used to finance new capital formation.  These are the Keynesian, Monetarist/Chicago, and Austrian schools of economics.

Of the three (and with reservations), the Austrian school has the soundest understanding of money, at least as far as it goes.  The Austrians recognize that money must be asset-backed, and preferably actually consist of assets, usually gold, although there are still some holdouts for silver, historically the most commonly used monetary metal.  This presumably maintains a stable value for the currency.

The Monetarists/Chicagoans, on the other hand, maintain that the amount of money in the economy should match the production of marketable goods and services.  The people in charge are tasked with determining exactly how much money should be created and backed by government debt so the economy will run smoothly.  This presumably maintains a stable price level.

Of course, Keynesian theory in practice quickly degenerates into politicians pushing for the creation of as much money as they can spend, for which there is always a good reason.  Because a stable political order, and not a stable economic order, is the real goal, government debt will sooner or later spiral out of control.  Instead of taxing to retire debt as Keynesian theory (adapted from Knapp’s chartalism) demands, tax revenues are used for expenditures.  Thus, even when there is clearly “too much money” in the economy, there is rarely a reduction in debt.

The question becomes what to do about it, which we will look at in the next posting on this subject.