As we saw in the previous posting on this subject, the global debt crisis did not come out of nowhere.  It is inherent in Keynesian economics.  It is an inevitable consequence of the unshakeable — and completely false — belief that it is impossible to finance new capital formation without first consuming less than is produced.  This is “past savings.”

We covered some of the more obvious contradictions underlying that assumption in the previous posting, but we only hinted at the Really Big Logical Fallacy.  That is, because Keynes didn’t see any way to finance new capital formation except with past savings, then using anything else is impossible.

That fallacy falls apart the moment anyone looks at it logically from any one of a number of different angles.  To take the most obvious one, if it is impossible to produce anything until and unless consumption has been restricted to allow for the accumulation of a surplus — i.e., “savings” — then where did the first production come from out of which savings were generated?

Remember: Keynes stated absolutely that it is impossible to finance new capital formation without savings (true), and that savings means only producing more than is consumed.  Whence cometh the original production?  You can’t say “God,” for Keynes was an atheist.

Further, Keynes made it clear that he was not including “the gratuitous offerings of nature” in the category of “production.”  These require the addition of human labor to turn them into “production” . . . and human labor does not exist without human beings who have to have consumed something in order to be alive to provide labor.

Saint Paul said that he who does not work, neither shall he eat . . . but he who does not eat is unable to work!  No, Keynes was quite plain in his meaning: “production” means only the results of human labor, whether or not enhanced by capital of any kind — which means that a contradiction is immediately set up, for no one can consume what doesn’t exist, and it doesn’t exist unless it has been produced . . . and you can’t produce without first not consuming . . . but you can’t consume unless you produce . . . but you can’t produce, etc., etc., etc.

Thus, the “logic” of Keynesian economics is based on a contradiction that puts the cart before the horse: that production must precede production.  This obviously violates the first principle of reason.  It’s like when someone says, “Everything I say is a lie,” or “If God can do anything, He can make a weight so heavy He can’t lift it.”  You see the trick?  Both statements are inherently contradictory.  They are neither true nor false, but nonsense.

Now, the “scientific method” demands that when you formulate a hypothesis, you first test it logically to see if it makes sense.  If it passes that test, then you test it empirically to see if what you think will or did happen does happen or could have happened.  Keynes’s hypothesis failed the test of logic, but human beings are not perfect, and there might be a flaw in our reasoning. 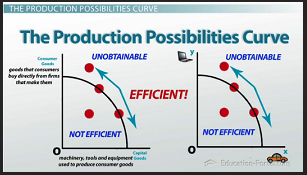 According to Keynes, an economy cannot grow faster than the rate at which people can cut consumption and save.  To try and grow at faster rates exceeds “the production possibilities curve,” which assumes as a given that production cannot exceed the rate of savings except in the short term.  Thus, if people save 10% of their income (thereby decreasing demand by 10%), the economy can — not will, but can — only grow at the maximum rate of 10%.

Of course, as Dr. Harold G. Moulton pointed out, if overall demand in an economy falls by 10%, then no rational person will invest in new capital formation.  This is because the fall in demand precludes the economic viability of new capital.  There is no reason to expand production, for demand is shrinking!  Only if demand is increasing and producers see a want or need unfulfilled for which effective demand exists will a producer expand productive capacity.  It is consumer demand that drives the demand for new capital formation.

That, however, is a different argument.  What we want to test now is the hypothesis — already disproved logically — that the rate of economic growth cannot exceed the rate of savings (except in the short term, the experts always add to give themselves an out).  If that is in fact the case, then what we would expect to see historically over the long term is a rate of economic growth over time matching the savings rate, or perhaps a little less, to account for hoarding of cash and un- or underused capital.

At no point could we possibly see a growth rate of more than 100%, as that is both practically impossible (people cannot save 100% of their income) and logically impossible (given that growth cannot exceed the savings rate).  Is that, however, what we in fact find to be the case?  Take the following development curve of human history: 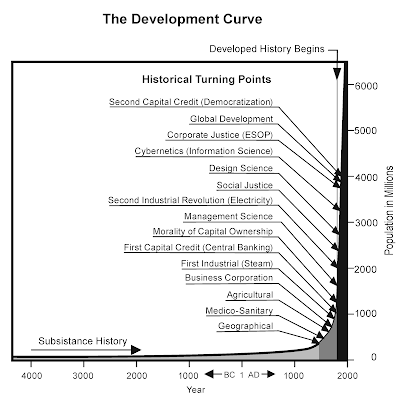 Just eyeballing this development curve reveals that what Keynes claimed and made a cornerstone of his economic theory — that the rate of economic growth cannot exceed the rate of savings — is astonishingly, even cosmically false.  On this basis alone, we are forced to conclude that Keynesian theory is disproved both logically and empirically.

That, however, leaves us with a paradox.  If new capital formation cannot take place without savings (which we not only admit, but rely on), where did the financing come from for today’s massive capital investment?  We’ve proved Keynes’s hypothesis absolutely false, but where does that leave us?