The Quest for Utopia

We’re having trouble keeping up with what various commentators are proposing as their respective solutions to the pandemic, racism, the economy, the politicians, the academics, the guy next door, and can you believe the price of [fill in the blank] these days?  Case in point: a few weeks ago (or was it months? it’s getting hard to tell . . .), an article appeared in Catholic World Report, a webzine, “America’s Utopian City Wreckers.” 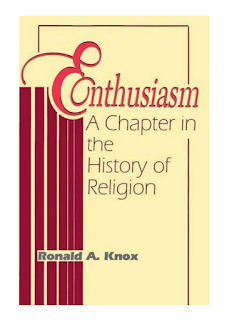 That’s not as confusing as it sounds.  It turns out that during times of personal and social stress, people have a tendency to turn to something, anything, that promises to make things better than they are.  The reasoning (or lack thereof) is usually along the lines of the system has failed, therefore destroy everything in sight and the perfect new order will magically appear.

Monsignor Ronald Knox wrote a 600-page tome that he considered his life’s work.  This was Enthusiasm (1950), in which he detailed the urge people have always had to succumb to, well, enthusiasm in religious matters.  Defining enthusiasm as an excess of charity that leads to disunity, Knox noted certain characteristics and tendencies of the enthusiast that always seem to be present, down to the smallest detail.

Knox did make one mistake, however.  He assumed — along with a lot of other people in the Catholic Church and elsewhere — that the problem of enthusiasm had largely disappeared by the mid-twentieth century.  He was wrong.  It had simply assumed new names and was in hiding in the social teachings of the Church, at least in Catholic circles.

The problem itself was even then pervasive throughout the world.  It never really went away.  According to the heads of the Catholic Church, the problem manifested in what they called “the new things” (rerum novarum) — what the rest of the world called socialism.

None of this is actually new, even though the Catholic Church called it “new things.”  It just seems new to the millennials who in increasing numbers are into socialism, the occult, etc., just as they were in the early nineteenth century.  As Dr. Julian Strube has shown in his work, there is a clear link between socialism and esoteric thought, and thus between socialism and what the Catholic Church calls “modernism,” a somewhat misleading way of saying that people have shifted from an objective understanding of truth, to one that is relative to what they want: the end justifies the means.

Just as inevitable is the urge to establish “the Kingdom of God on Earth,” or some secular variant thereof.  The Fraticelli, for example, are the Medieval darlings of today’s socialists, the “only real Christians” because they wanted to abolish property, society, and everything else that they believed deviated from the message of their chosen prophet, St. Francis of Assisi . . . and were willing to kill anyone or destroy anything that got in their way of establishing the Kingdom of God on Earth.

And why did people presumably totally pacifist and dedicated to the pure love of God do so much damage and kill others and destroy property?  Because only those who accept the message of St. Francis (or Gandhi, or Martin Luther King, or Jesus, or Buddha, or Whatever) are entitled to live in peace or have any rights at all.  Everyone else is of the ungodly — or un-something — and can be (and in some cases must be) destroyed.  The ungodly have no rights to life, liberty, or property.

A theocracy (or the secular equivalent) is always the goal of the godly enthusiast.  Everyone else must either go along or be destroyed.  It’s God’s will.  It is also a common fixation of the enthusiast that if only the ungodly individuals, groups, or institutions are destroyed, the perfect new order will spring spontaneously into being.  If it doesn’t, it’s because there are reactionary saboteurs who must be rooted out and destroyed as they are preventing the perfect world from coming into being.