Yes, most of the news is related one way or another to the pandemic, but it also relates to the Just Third Way.  The one news item we don’t see that we’d like to is an announcement that the powers-that-be have finally figured out that a strong economy depends on making ordinary people productive, which in a modern advanced economy (or any other, for that matter) means ownership of whatever is producing marketable goods and services, be it technology or human labor:

• U.S. Savings Rate is Up.  According to a brief mention in the Wall Street Journal, the U.S. per capita savings rate is up to over 20% . . . but America is not “saved,” meaning the much-vaunted recovery is a hollow shell.  As Dr. Harold Moulton showed in his 1935 classic, The Formation of Capital, periods of recovery and economic growth are preceded not by increases in saving, but by decreases!  Come again?  Yes.  In order to justify increasing production, hiring more workers, and acquiring additional capital, a rational business owner or manager wants to be reasonably assured that there is a market for what is produced; after all, the first principle of economics is, “Consumption is the sole end and purpose of all production” (Adam Smith, The Wealth of Nations).  This makes sense, for if people are saving, they aren’t consuming, and there’s no market for more goods and services that people aren’t buying, anyway.  But if people are spending instead of saving, where is the money to come from to finance new capital formation?  From the expansion of commercial bank credit.  And if you’re doing that, why not make it possible for anybody who is creditworthy to purchase capital?  And also have a program to make as many people as possible creditworthy?  That was the point of the two books by Louis Kelso and Mortimer Adler, The Capitalist Manifesto (1958) and The New Capitalists (1961).

• Show Us the Money!  The People’s Republic of China, like many of the early socialists, is not against capitalism.  No, it’s against capitalism — and capitalists — that doesn’t finance socialism.  As the Wall Street Journal reported (“Hong Kong Endures As Financial Hub,” 07/24/20, A-1, A-9), while civil liberties and just about everything else have been curtailed in Hong Kong, the Chinese government is making every effort to preserve the financial system that generates cash from capitalist activity.  On the mainland, too, capitalism is encouraged, as long as it doesn’t get in the way of socialist goals, and in many cases joins with socialism in common endeavors.  This is at a time when religious and ethnic minorities continue to be targeted for liquidation, a goal consistent with that of socialism as a replacement not for capitalism (which it willingly accepts as a partner), but for traditional organized religion, be it Judaism (although not much of a “problem” in China), Christianity, Islam, or Tibetan Lamaism.  In socialism, “religion” is a social phenomenon, what David Émile Durkheim described as “the group’s worship of itself,” with “God” as a “divinized society,” represented by the government, which functions as the “Mortall God” described by Thomas Hobbes in Leviathan.

• Irish Stimulus.  As reported in The Irish Times, the new Irish stimulus package includes everything . . . except a provision to turn people into capital owners so that they can become productive without further stimulus. . . .

• A Primer on Brexit.  Don’t worry, it’s not very long, but this article might help those of us on this side of the pond to understand what all the fuss is about Brexit.  It does seem a bit odd that, just as the world needs to come together, some individuals and groups are trying very hard to fragment things as much as possible.

• French, English, or American?  One of the more interesting things we’ve discovered from our research into the origin of social justice is that the term “liberal democracy” has three distinct meanings, yet most historians and analysts have assumed there is only one.  As made clear by Alexis de Tocqueville in Democracy in America (1835, 1840), however, the three types of liberal democracy are “French” (European), in which the collective is sovereign, “English,” in which a social or financial élite is sovereign, and “American,” in which each human person is sovereign.  French liberal democracy leads to socialism (State ownership or control of capital), the English variety leads to capitalism (concentrated private ownership or control of capital), and the American type lends itself to some form of economic personalism (widespread private ownership of capital).  Due to factors we won’t go into here, “American” liberal democracy has virtually disappeared, and the French and English liberal democrats (not to be confused with any political parties, this is political philosophy, not party affiliation) go after each other hammer and tongs. 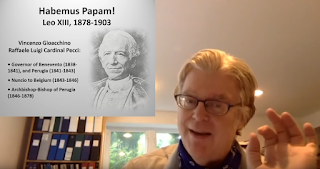 • Rise of Socialism Videos.  The series of videos, now three in number, on the rise of socialism and how it “infiltrated” modern society to the degree it has, is proving to be popular.  Although they are produced by a “Catholic” production company, Sensus Fidelium, and the talks bring in a substantial amount of Catholic social teaching as well as personalities, the subject matter is natural law-based, and should appeal to anyone with an Aristotelian philosophical orientation.  To date, there have been more than 3,500 views of the hour-plus long programs.  This grows to nearly 5,000 when the short review of a book (that has nothing to do with socialism) is added.

• Economic Personalism.  The cover is being finalized and the foreword by a former Vatican Journalist is in editing.  The back cover is in development, and the “landing page” is in the preliminary stages.  We even have a potential “Big Name” endorser who might get the book to other “Big Names” whose thumbs up would help spread the word.

• Blog Readership.  We have had visitors from 33 different countries and 34 states and provinces in the United States and Canada to this blog over the past week. Most visitors are from the United States, Canada, the United Kingdom, Australia, and India.  The most popular postings this past week in descending order were “News from the Network, Vol. 13, No. 29,” “The REAL Story of the First Social Encyclical,” “What Do You Mean By ‘Distributism’?” “Interfaith Catholic Action? Why Not?” and “JTW Podcast: Intro to Thomistic Personalism.”