Interfaith Catholic Action? Why Not?

In a recent article, His Auxiliary Excellency Bishop Robert Barron opined (how do you like that word?) that if the laity want something done — such as protecting religious statues — they should stop asking the bishops to do something, and start thinking about doing it themselves.  That’s something of an oversimplification of a rather more involved argument, but that’s the message most people took from it . . . and they were not pleased.

How much not pleased?  We stopped counting as it grew tiresome, but at last count (ours, not the actual current count) there were three positive comments and 85 — count ‘em, 85 — negative ones, and we’re being polite to call them merely negative.  That’s 93% negative reaction to Bishop Barron’s article.  We’ve seen other comments on other statements and actions by His Excellency, so it might be time for him to consider another way . . . like the Just Third Way, perhaps. . . .

We should point out, of course, that our comment was positive and (if Bishop Barron actually saw it) might give him something to think about.  Judging from the follow-up, even if he saw our comment, all it got was a giant, “Meh.”  Instead of responding to the rather broad hints we laid out, His Excellency decided to show the flag at a demonstration or two.

Of course, if he was familiar with the writings of CESJ co-founder Father William J. Ferree, S.M., Ph.D., Bishop Barron would know that participating in demonstrations may be necessary, laudable, and all that . . . but it isn’t what he was talking about in his article . . . that is, if he knows what “Catholic Action” is supposed to be, anyway.

After a little more criticism, His Excellency caved and went to a few protests . . . but still didn’t do anything substantive either to address the immediate problem of vandalism and iconoclasm, or how to carry out effective social action in a manner consistent with the original intention of Catholic Action.  In any event, as we were reading the article, we had the following reaction.

We said to ourselves that what His Excellency was talking about sounded like the “Lay Apostolate” or Catholic Action as reformed by Pope Pius XI . . . which, as we read further, is what it turned out to be.  His Excellency was also correct that Catholic Action fell by the wayside following Vatican II.  This is ironic, as our understanding of the Council is that John XXIII intended it to restart Pius XI’s initiative and apply that pontiff’s completed social doctrine to counter the “new things” of socialism, modernism, and esotericism (“New Age”) condemned by Gregory XVI, reiterated by Leo XIII, and were the reason Pius IX called the First Vatican Council.

Despite all the surreal absurdities that have been forced on Vatican II by adherents of the new things, however, there remains hope.  The work of Catholic Action — the restructuring of the social order — is carried on by the interfaith Center for Economic and Social Justice in Arlington, Virginia.

Co-founded in 1984 by Father William J. Ferree, S.M., Ph.D, an acknowledged expert in the social doctrine of Pius XI, CESJ has received the personal encouragement of John Paul II during a private audience with His Holiness along with members of Polish Solidarity.  We were later informed (but could not verify) that John Paul II recommended CESJ’s proposals on at least three occasions to diplomatic visitors at the Vatican.  The proposals were later presented at a seminar at the Vatican under the auspices of His Eminence, Achille Cardinal Silvestrini to heads of religious congregations and Vatican personnel.

CESJ’s proposals were also the subject of the Presidential Task Force on Project Economic Justice, intended to develop a plan to counter the spread of Marxism in Central America and the Caribbean Basin.  The report was hand-delivered to President Ronald Reagan and later to John Paul II. 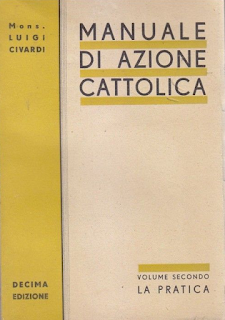 The techniques of social justice — properly understood (described by Fr. Ferree in his 1948 pamphlet, “Introduction to Social Justice”, available as a free download  — are based on the techniques of Catholic Action described by Msgr. Luigi Civardi in his book, A Manual of Catholic Action (Sheed & Ward, 1936).  They offer a practical means not only of addressing the current problem, but of many of the problems that continue to beset “the City and the World” in the wake of the advent of the new things.

A visit to the CESJ website might prove useful for those seeking practical solutions instead of expecting someone else to carry out the essential task of restructuring the social order.  As Fr. Ferree pointed out, the common good is the object of each person’s particular solicitude.  All we need is to understand what the Church really means by “social justice.”