We admit that much of what is happening these days does not lend itself to brief news items.  Making matters worse, those events that are genuinely brief are not infrequently completely unrelated to the Just Third Way.  We did, however, manage to find a few things: 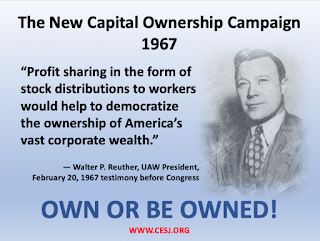 • New York Times and Worker Ownership.  As reported on the blog of the National Center for Employee Ownership, in the opinion of experts (with whom, for a change, we concur) the pandemic will change ownership patterns in the United States.  Due to the increased anxiety over sustainability, there will be an increase in the number of mergers and buyouts (no doubt by executives wearing Brooks Brothers suits purchased in the bankruptcy sale).  This will further concentrate the ownership of America’s corporate wealth.  On June 25, former Secretary of Labor Robert Reich wrote a piece advocating “a fairer economy in which employees receive a share of corporate profits.”  As he closed his article, echoing the late Walter Reuther’s 1967 testimony before Congress, “It’s impossible to predict what kind of America will emerge from the crises we’re now experiencing, but the four-decade trend toward higher profits and lower wages is unsustainable, economically and politically. Sharing the profits with all workers is a logical and necessary first step to making capitalism [or, better, economic personalism — ed.] work for the many, not the few.”  Over half a century ago Walter Reuther said “Profit sharing in the form of stock distributions to workers would help to democratize the ownership of America’s vast corporate wealth.”  On June 30 of this year, Dr. Timothy Wu of Columbia University noted in the New York Times that the government should be encouraging worker buyouts.  As he said, “While worker buyouts have been rare and are overly complex, Congress could encourage them by allocating some of the recovery funds to equity investments by employees looking to acquire their company.”  Well . . . as the NCEO blog points out, it’s not all that difficult.  CESJ suggested something similar in its paper, “Universalizing Capital Ownership.”

• The New Birth Project Reborn?  It was only a few decades ago that CESJ promoted “the New Birth Project,” which was based on turning prison industries into worker-owned enterprises as a way in which prisoners could maintain themselves, make reparation to their victims, and prepare to reenter society as productive members.  As reported on the NCEO blog, a paper by Professor Robynn Cox at University of Southern California published by the American Economic Review, “The Role of Broad-Based Employee Ownership Opportunities in Prisoner Reentry,” suggests that ESOPs (and expanded ownership in general) have an important role to play in addressing the wealth and income gap.  As Dr. Cox stated, “ESOP employment is significantly associated with a roughly 25.4 percent increase in annual earnings [and] a roughly 8.8 percent increase in weekly hours worked.”  As the NCEO blog concluded, “Her statistical analysis also finds a significant relationship between ESOP employment and a decrease in the likelihood of criminal activity.” 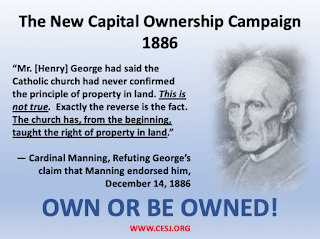 • Henry George Lies to Cardinal Manning.  Oh, you wanted recent news?  We’ve been running a series of “mini-posters” for a “New Capital Ownership Campaign” (although few people recall the old Capital Ownership Campaign), featuring quotes from historical figures about private property and its benefits.  We’ve had Daniel Webster, Benjamin Watkins Leigh, Pope Leo XIII, Walter Reuther, and the latest, Edward Cardinal Manning, who on hearing that the agrarian socialist Henry George claimed that Manning had endorsed the abolition of private property in land, sent an open letter to the New York newspapers (published December 14, 1886) explaining that, “Mr. [Henry] George had said the Catholic church had never confirmed the principle of property in land. This is not true.  Exactly the reverse is the fact. The church has, from the beginning, taught the right of property in land.”

• Economic Incoherence.  An excellent (if that is the correct word in this context) example of the sort of convoluted reasoning and creative myth-making one is forced into by avoiding the common sense of the Just Third Way of Economic Personalism can be found in a recent book review of The Enchantments of Mammon (2020) by Eugene McCarraher.  The review by Chilton Williamson, Jr. properly chides the book’s author for attributing to magic what can be explained by reason and for pushing a capitalist-socialist-modernist-esoteric agenda, but then falls apart in it its own economic analysis by pushing an agenda influenced (and in some degree dictated) by the same things the reviewer criticizes in the author.  Neither one realizes that while in the cosmic scheme of things the economy comes pretty low on the list of priorities, it takes top priority among immediate things that must be taken care of in accordance with the correct principles, not just those that happen to be popular or expedient at the moment.  So far as we know, only the Just Third Way does that without getting into cosmological absurdities or analyses based on (and we quote) “trying to ‘immanentize the eschaton’ in its economic dimension,” whatever that might mean.  The review is worth reading only if you want to see desperation in action trying to explain economic life without the Just Third Way.  Even more simply put, the best place to start is Adam Smith’s first principle of economics as stated in The Wealth of Nations: “Consumption is the sole end and purpose of all production.”  All the cosmic meaning piled on afterwards may be significant, or it may be drivel, but once you lose sight of this first principle, you’re sunk. 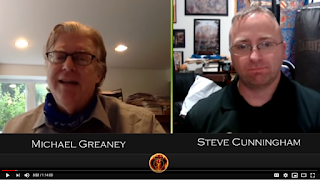 • Origins of Socialism.  Okay, it’s a heavily “Catholic” video channel, and the slant is definitely religious, but if you have your filters operating properly and don’t mind watching an hour and a quarter video, this “Sensus Fidelium” episode might be of interest.  It’s hosted by Steve Cunningham of (obviously) Sensus Fidelium (“Sense of the Faithful” for you non-Latinists) and the guest is CESJ’s Director of Research.  The point of the video is not to proselytize for Christianity, but to present the historical context of the development of socialism/communism, which was originally intended as “the Democratic Religion” to replace the existing domestic, civil, and religious order, the first principle being that the end justifies the means.

• Irish Racism.  In an effort to erase racism, the makers of the word game Scrabble have announced that future editions of the game for Ireland will no longer allow the words “Culchie” and “Jew.”  A “Culchie” (or “Culchy”) is a word for someone who is not from Dublin, while “Jew” is a word for someone who is Jewish.  Both words have on occasion been used in a pejorative sense, as have “Yank,” “Brit,” “Orange,” “Green,” “Mick,” “Paddy,” and “Saxon,” all of which evidently will remain allowed words.

• Economic Personalism.  We don’t yet have a publication date, but the perennially upcoming book on the Just Third Way of Economic Personalism is expected out “soon.”  A cover is being finalized and the Foreword by a former Vatican journalist is being edited.  Formatting is almost complete and it is anticipated that indexing may be possible in the near future, which will give us an actual page count so we can assign an ISBN and obtain an LOC preassigned control number.  The book should be available in both a free ebook format and as an inexpensive trade paperback.

• The First Principle of Reason.  This morning we again came across someone who never heard of the first principles of reason, and thought that holding someone guilty until proven innocent was not merely okay, but mandatory; that anyone demanding proof of guilt instead of innocence is a fool.  We pointed out that you cannot logically prove the existence of non-existence, and the respondent’s, uh, response was to declare that he had never heard such a thing before, and therefore the principle is invalid.  We in turn commented the principle that you are innocent until proven guilty and that you cannot prove the existence of non-existence comes from Aristotle’s first principle of reason, the “law” of (non) contradiction, that nothing can both “be” and “not be” at the same time under the same conditions.  I cannot prove I did not do something.  You have to prove that I did.  The burden of proof lies with the accuser, not the accused.

• Blog Readership.  We have had visitors from 34 different countries and 43 states and provinces in the United States and Canada to this blog over the past week. Most visitors are from the United States, Canada, the United Kingdom, Tanzania, and Argentina.  The most popular postings this past week in descending order were “America Delenda Est?” “News from the Network, Vol. 13, No. 27,” “Job Security for (Personalist) Revolutionaries,” “Feudalism v. Distributism,” and “Citizens Land Cooperative.”