A while back in response to an item touting Capital Homesteading as a possible way to bring people together and turn the economy around in our weekly Just Third Way news roundup, someone posted a comment to the effect that the original 1862 Homestead Act was (wait for it) . . . racist!  As a way of refuting our promotion of Capital Homesteading as a way of possibly establishing a little racial harmony and putting the economy back on a sound footing, the Righteous One went on to explain that the 1862 Act was “Whites Only,” and Black homesteaders were completely unheard of.

Having personally met individuals descended from Black homesteaders we knew that was not the case.  We even knew that Black homesteaders founded a dozen or so “Black” towns in the west — we’re fairly certain there were no “Blacks Only” signs at the town limits, but Whites didn’t generally move into “other” areas in that day and age, and some places were even divided by national origins.  Brownsville, Texas, for example, had a French Quarter, a German Quarter, a Mexican Quarter, and an “American” (i.e., everybody else) Quarter.  Children grew up learning to speak four different languages more or less fluently from their friends and family.

In any event, the comment inspired us to do the commentator’s homework for him-and-or-her, so we googled “Black Homesteaders” and got a gazillion possibilities within seconds.  It seems we weren’t the only ones asking if Black families and individuals had taken advantage of the Homestead Act.  One of the better sites was that of the National Park Service, “African-American Homesteaders in the Great Plains.”  It has lots of photos and an “encyclopedia-style” article on the subject, very objective (from our point of view, anyway), straight, and to the point.

Now, the sheer number of websites mentioning Black homesteaders completely refuted the commentator’s claim that the Homestead Act was “Whites Only.”  After we posting the link to the National Park Service’s webpage (and a rather mean comment that the NPS had better destroy all those photos of Black families in front of their homes if they want to support the commentator’s claim) we didn’t hear anything more from the commentator, surprise, surprise.

On reading the NPS’s webpage, however, two things became evident, one explicitly, the other implicitly. 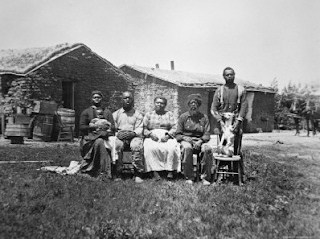 Explicitly, while there were some Black homesteaders, there weren’t very many, about 3,500 families, according to the National Park Service, and maybe a dozen small towns.  Obviously, while Black folk weren’t prohibited from filing for a homestead, they weren’t exactly encouraged, either.  Add to that the fact that while most White families that homesteaded had very little, the Black families had even less.  Plus (or minus, actually), where White homesteaders often found it almost impossible to get credit to develop the land, Black homesteaders often found it completely impossible.

Then there is the plain and simple fact that land is limited.  Once it’s all taken, there is no more for others.  That is why Frederick Jackson Turner declared in 1893 that the end of “free land” meant the end of American democracy (at least as he understood it).

Capital Homesteading would get around all of these difficulties and problems.  By making opportunity and means available to every child, woman, and man, the program is completely colorblind.  To ensure the ability of the “Capital Homesteader” to get the all-important capital credit to purchase capital that pays for itself out of its own future profits, the proposal focuses on making the investment itself, not the Capital Homesteader, “creditworthy.”

This, then, would be the best kind of reparations: ensure that the people who have suffered from a bad system benefit from a good system.  There would be no need to make monetary compensation on grounds that would be politically unworkable, even if the tax base could support it.

Think of it as “job security for personalist revolutionaries.”