The Labor Theory of Value

“It is a truth universally acknowledged, that a single man in possession of a good wife, must be in want of a job.”  That, of course, is the famous opening line from fictional author Gianny Austin’s apocryphal novel, Property and Prejudice, a comedy of manners in which ownership of the means of production (except for an economic or political élite) is depicted as being not quite polite, and the characters spend all their time cleverly positioning themselves for higher wages and fixed benefits, and then wondering why prices are so high and why other people keep telling them what to do.


We, of course, made all of that up.  As far as we know, there is no novelist or even writer named Gianny Austin, although there is a book titled Prejudice and Property (but it’s not a novel) and another titled Pride, Prejudice, and Property (that’s not a novel, either).  The problem of people locked into the wage system is, however, quite real, and has had a serious and very damaging effect on our understanding of human dignity.
As we saw in the previous posting on this subject, both capitalism and socialism embody the belief that the only way for most (if not all) people to gain a living income is wages paid for their labor.  In the minds of many people, this has developed into the fixed belief that “human dignity” absolutely requires a wage system job, and that you are somehow less than human if you don’t have a “job.”  This was, in fact, embodied in Nazi theory and even the legal system with the concepts of “useless eaters” and “life unworthy of life.”  The whole “Culture of Death” is based on the assumption that some lives are inherently worth more than others. 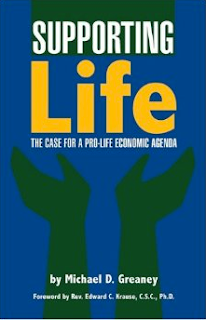 Even when someone has another source of income, such as charity, welfare, or retirement savings or a pension, the tendency is to view the income as a substitute for wages.  For example, under retirement law in the United States, a pension is viewed as “deferred compensation,” i.e., money paid in to a qualified retirement plan by a plan sponsor to be paid out to plan participants after retirement as a sort of “continued wage” that was already earned while the participants were working.
Even in Catholic circles the idea has entered in with a vengeance that “human dignity” necessarily means “adequate wage income.”  This has given the “Pro-Choice” movement one of its most effective propaganda weapons against the “Pro-Life” movement: the claim that “Pro-lifers don’t care about people after they’re born.”  Believe it or not, we actually got attacked by a “Pro-Life” leader or two when we recommended a “Pro-Life Economic Agenda” that incorporated a recommendation that “as many as possible of the people prefer to own capital” and generate a living income through ownership instead of or in addition to wages.  One economist snarled that the “Pro-Life” movement already has an economic agenda: the just wage . . . implying that we called for an unjust wage!
In any event, there is a definite prejudice in modern society against widespread capital ownership.  Whether this has been enculturated by capitalism (which we define as concentrated private ownership of capital) or socialism (which we define as abolition of private ownership of capital) is probably a moot point at this point.  The bottom line is that somehow the very thing that Aristotle and others down to the present day have insisted is that private property in capital, the chief prop of human dignity, has somehow become regarded as the principal thing attacking human dignity!
As we saw, the argument goes something like this.  1) Human labor is inextricably linked to the human person and is therefore the natural way for human beings to live.  2) . . . well, there is no 2.  That’s the whole argument.  That is, that’s the whole argument in favor of labor.  It’s when we get into the argument against private property that things get interesting.  Or weird.
From the laboristic orientation, human labor is the only thing that creates property because human labor is the only thing that is productive.  This assumption caused a few problems for those advocating the labor theory of value, but they were easily . . . or at least glibly dealt with.
For example, David Ricardo (1772-1823) had a slight difficulty with what Adam Smith (1723-1790) handled fairly easily . . . but then, Ricardo was “correcting” Adam Smith’s theory of the three factors of production, land, labor, and capital.  As far as Ricardo was concerned, there is only one factor of production: human labor.  As he declared in the opening passages of his Principles of Political Economy and Taxation (1817),
It has been observed by Adam Smith, that “the word Value has two different meanings, and sometimes expresses the utility of some particular object, and sometimes the power of purchasing other goods which the possession of that object conveys. The one may be called value in use; the other, value in exchange. The things,” he continues, “which have the greatest value in use, have frequently little or no value in exchange; and, on the contrary, those which have the greatest value in exchange, have little or no value in use.” Water and air are abundantly useful; they are indeed indispensable to existence, yet, under ordinary circumstances, nothing can be obtained in exchange for them. Gold, on the contrary, though of little use compared with air or water, will exchange for a great quantity of other goods. 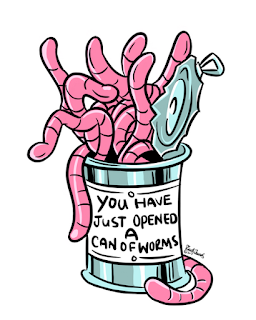 Utility then is not the measure of exchangeable value, although it is absolutely essential to it. If a commodity were in no way useful, — in other words, if it could in no way contribute to our gratification,--it would be destitute of exchangeable value, however scarce it might be, or whatever quantity of labour might be necessary to procure it.
Possessing utility, commodities derive their exchangeable value from two sources: from their scarcity, and from the quantity of labour required to obtain them.
In other words, where Smith said a thing is worth what the customer is willing to pay for it, Ricardo said all things already have utility value (which is what Smith said), so they get their value from the labor it took to produce them (say what?); a thing is worth the labor it cost to produce it combined with its scarcity.  Of course, you’re not supposed to ask, What if it takes immense labor to produce a unique item that nobody wants?
That is what we call “a can of worms,” and we will look at it and other problems associated with the labor theory of value in the next posting on this subject.
#30#