In the previous posting on this subject, we continued posting sections of our recent CESJ position paper, “Universalizing Capital Ownership.”  As we said before, of course, .  Of course, if you want to read the entire paper without waiting for the parts to be posted, just click on the link.


As previously noted, the paper suggests a number of things that can be done to ameliorate the immediate situation and lay the groundwork for a just and effective recovery.  Today’s portion focuses on “a new monetary paradigm” based on the use of future savings (future increases in production) instead of past savings (past reductions in consumption).
UNIVERSALIZING CAPITAL OWNERSHIP
How Article 17 of the Universal Declaration of Human Rights Can Save the Economy
April 17, 2020
Center for Economic and Social Justice (CESJ.org), April 17, 2020
Part III
A New Monetary Paradigm
The principles applied in the successful worker buyout of Mid South are based on a new monetary paradigm that recognizes money as a unique “social tool.” Individuals and businesses can and do create non-currency forms of money to facilitate their transactions, including the production, distribution and purchase of goods and services. However, it is within a sound system of central banking, local commercial and cooperative banks, and capital credit insurance that the full social potential of money can be realized. (See “A New Look at Prices and Money.”)
ESOP inventor, financial lawyer and universal citizen ownership theorist Louis O. Kelso observed that money is a “yardstick,” i.e., a symbolic means for measuring “economic input, economic outtake and the relative values of the real goods and services of the economic world.” Money is not the physical things or services we need to produce and consume, but it is an essential social tool for enabling every person to measure value and engage in work, not only to provide for his or her economic needs and wants, but also for the common good. It allows for personal freedom to make sound family, educational, spiritual, health, social, and political choices that promote economic liberation, prosperity, and personal political independence for every human being.
Along these lines, a stable and uniform measure of monetary values for all economic transactions should be adopted for all global currencies. (A 21st century alternative to a monetary standard based on gold or a basket of commodities was proposed by world design science architect Buckminster Fuller in his 1982 book Critical Path. He conceived of a global monetary “yardstick” based on the price of a kilowatt-hour, which would reflect the growing contribution of advanced green energy technologies and infrastructure for lowering the cost of universally available and dependable electricity throughout the planet.)
The key issue in this economic crisis is not the lack of new money, but the lack of a global monetary system that achieves equal opportunities for every person to acquire and own the most advanced productive technologies, artificial intelligence, advanced communications and energy systems, using capital credit repayable with future profits. As new technologies replace the need for human labor in most facets of the economy, the democratization of future capital ownership will gradually reduce the need for government income assistance and redistribution.
Had previous stimulus packages been designed to create new owners along with new capital formation, world economies would have experienced sustainable and non-inflationary growth. More resources would have been available to deal with disasters such as the COVID-19 pandemic, not only in developed countries but in also in developing countries where citizens are especially vulnerable to this threat. 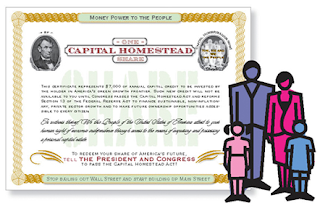 Collateralized by capital credit insurance, self-liquidating capital credit should, as a fundamental right, be made available on an equal basis to all citizens. This would turn today’s non-owners into economically independent owners of productive capital. Such credit would finance the purchase of new or existing productive assets needed by businesses. Future earnings on the shares would pay off the acquisition loans — in other words, using “future savings” rather than “past savings” or reductions of current consumption income to repay the capital credit.
Once the acquisition loans are repaid, the asset-backed money created to purchase the capital would be canceled or reused to finance new economic growth, thus avoiding both inflation and deflation. The capital itself would continue to produce wealth and generate consumption income for its new owners.
Each increment of new capital added would pay for itself with its own future earnings. Consequently, normal market forces would synchronize supply and effective demand for economic growth. This would continue as long as the new capital assets provide a source of capital-generated income for today’s non-owning citizens, particularly the poor and others who do not have sufficient and secure incomes. In addition to reducing the need for government redistribution of income, workers and other current non-owners could help sustain economic growth, contribute to the tax needs of all levels of government, and secure their own financial and political independence by becoming owners of future increases in capital productiveness.
To achieve universal citizen access to future capital ownership opportunities will require moving beyond the ESOP mechanism, which is only one vehicle designed by Louis Kelso for corporate employees to participate in financing new capital formation. A national policy agenda, called in the U.S. the “Capital Homestead Act,” would extend the same means of acquiring new capital assets to every person.
#30#