A Measure of Reform

In the previous posting on this subject, we posted another section of our recent CESJ position paper, “Universalizing Capital Ownership.”  Today we get to the final section of the paper, dealing with the short-term emergency measures we believe to be necessary, and a brief outline of the long-term reforms to the system that need to be carried out.  Of course, if you want to read the entire paper without having to go back and read the individual postings, just click on the link above to the full paper.  It’s pretty short.


Again, the paper suggests a number of things that can be done to ameliorate the immediate situation and lay the groundwork for a just and effective recovery.  Today’s portion focuses on short-term emergency measures and long-term reforms (obviously).
UNIVERSALIZING CAPITAL OWNERSHIP
How Article 17 of the Universal Declaration of Human Rights Can Save the Economy
April 17, 2020
Center for Economic and Social Justice (CESJ.org), April 17, 2020
Part IV
Emergency Short-Term Measures
Government’s first duty is to protect the lives, security and property of its citizens. In the short-term this may necessitate actions that are redistributive and that create added government debt. Such debt results when the government spends money created and regulated by the central bank that has nothing of value behind it other than the government’s promise to pay in the future for its spending deficits via taxation. Those measures, however, should cease immediately after the crisis is over, making whole those people who had their property rights infringed upon, and collecting future taxes to repay the government’s increasing debt from deficit spending.
Where the new “emergency money” can be channeled to private sector businesses to produce emergency medical and other supplies needed during the pandemic, such money should flow as loans through financing mechanisms such as Employee Stock Ownership Plans. ESOPs, which are already in the law, can create equal capital ownership opportunities for every employee in the companies producing the emergency supplies. The government would serve as the guarantor of those loans, and as the customer that purchases and distributes the emergency goods where needed.
Long-Term System Reforms 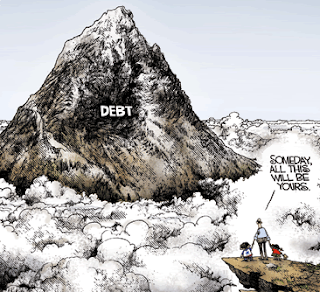 To offer hope, maximize collaboration and inspire unity among all citizens during and following the current crisis, leaders of all nations should take immediate advantage of the current crisis to communicate a new vision and plan. Countries should immediately adopt laws promoting major reforms in monetary policy, central banking, tax, capital credit insurance and other institutions. These reforms would provide a solid foundation for a sustainable, resilient and just economy consistent with Article 17 of the Universal Declaration of Human Rights.
As a consequence of the world’s current war to defeat the COVID-19 coronavirus, central banks are creating unlimited emergency money to help governments address the near total breakdown of world’s production and consumption capabilities. When the pandemic ends, commercial and central banks in all countries should issue money for achieving full production linked to widespread purchasing power from future capital ownership incomes for all survivors.
Using the U.S. as an example for other governments and central banks, all money backed by US government debt (now exceeding $24 trillion or almost $74,000 per citizen) should be gradually retired and replaced with money backed by “green growth” productive assets needed by businesses for faster rates of growth in a more just global free market economy.
This new money would be made accessible through interest-free, fully insured new loans made annually by local banks to every person from birth to death. These loans would cover all costs of purchasing voting, full-dividend-payout shares of corporations and cooperatives that produce goods and services for potential national and global consumers. Each citizen’s capital acquisition loans would be wholly repayable with the full stream of future profits earned on the shares. (Follow this link to see how Capital Homesteading would finance universal citizen ownership of future green growth assets.)
Central banks, which should no longer be controlled by government but by all citizen-owners, should use their “rediscount powers” as a substitute for charging interest for regulating the monetization process. In addition to the principal to be repaid on capital credit loans to citizens, would be a one-time premium to cover the risk of loan default as well as reasonable charges for the services of the central bank and bank lenders.
To meet the full costs of the government and start paying down past and future debt for legitimate government services, a single-rate tax should be imposed on all personal income above a per-citizen exemption sufficient to meet each citizen’s or family’s common domestic needs, including education, healthcare and shelter. Government and/or foundations would continue to provide a social safety net to take care of anyone whose income falls below the exemption.
To increase the role of a more free, just and non-monopolistic market system for economically empowering every citizen, all payroll taxes, property taxes, and all other personal taxes, e.g., VAT and sales taxes, should be phased out. This would make government costs more transparent, and make politicians more accountable, to the citizens.
To encourage full payout of corporate earnings and finance new capital formation through the issuance of new shares, dividends should be tax-deductible at the corporate level, potentially reducing a corporation’s tax liability to zero. Dividends would then be taxed as personal consumption incomes of all shareholders, except when used to pay for qualified shares held within each citizen’s tax-sheltered ownership trust account.
Conclusion
The depth and breadth of today’s global crisis creates a moment of unparalleled opportunity, where the minds of leaders and citizens may be most open to systemic change, particularly in our monetary and tax systems, so that money, ownership and economic power flow from the bottom up, not the top down.
If we muster our knowledge, resources and resolve, humanity can overcome the pandemic threatening our lives and economies. If we open our eyes to a new paradigm of economic personalism and justice, we can build for every person a more sustainable, environmentally sound economy and life-enhancing future.
#30#