As we saw in the previous posting on this subject, Fulton J. Sheen left the Catholic University of America and transferred to the Louvain two years into a three year doctoral program due to the rapidly degenerating level of academic standards under the auspices of the noted Msgr. John A. Ryan.  Not surprisingly for one of his temper, Msgr. Ryan appears to have taken Sheen’s move as an insult or a personal attack of some kind. 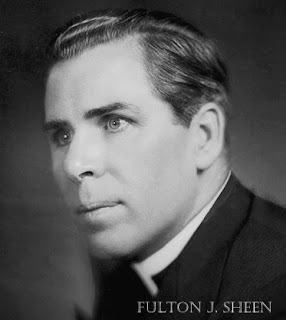 It didn’t help any that Sheen’s doctoral thesis, God and Intelligence in Modern Philosophy in Light of the Philosophy of Saint Thomas Aquinas (with an Introduction by G.K. Chesterton, no less), while not an easy read, was far more intellectually rigorous than Msgr. Ryan’s bestselling thesis, A Living Wage.  Possibly not by coincidence, Sheen’s thesis flatly contradicted every one of Msgr. Ryan’s arguments in A Living Wage and Msgr. Ryan’s magnum opus, Distributive Justice.  The fact that Sheen took his degree at the Louvain at a level only attained by forty people or so in the past six centuries only made Msgr. Ryan’s intellectual and other deficiencies that much more apparent.

From the first, Msgr. Ryan seems to have targeted Sheen for “special attention.”  It was evident to other faculty that Sheen was made unwelcome in the School of Sacred Sciences.  Before he had been there a year he requested a transfer to the School of Philosophy.

The other faculty voted to approve Sheen‘s request for a transfer, but it was denied, by whom is not clear. (Kathleen L. Riley, Fulton J. Sheen: An American Catholic Response to the Twentieth Century. New York: Society of St. Paul, 2004, 12.)  Subsequent events suggest it might have been Bishop Shahan, the Rector, who turned down the request for transfer, possibly because he wanted Sheen in Msgr. Ryan’s department to counter the threat of the Modernist Monsignor.

Later, in a faculty meeting with the Rector, Sheen was the only member of the faculty to disagree with what he believed to be an unwise proposal by Shahan. (Sheen, Treasure in Clay, op. cit., 44.) Everyone thought Sheen‘s career was over.  As he related, “The other professors gathered around me and said: ‘Well, you certainly killed yourself.  Here you are at this university only a year and now you are an outcast’.” (Ibid.)

A few days after the meeting incident, Shahan called Sheen into his private quarters.  The rector put on his full ecclesiastical regalia, sat down, and ordered Sheen to kneel before him.  Expecting to be dismissed, Sheen obeyed.  Shahan then said, “Young man, this university has not received into its ranks in recent years anyone who is destined to shed more light and luster upon it than yourself.  God bless you.” (Ibid.)

It seems evident that Shahan, impressed with Sheen‘s qualifications and first-hand experience of the situation at Catholic University, saw in him a way to deal with the problem of Msgr. Ryan.  Shahan first tested Sheen‘s obedience by requesting his assignment to parish work.  After having Sheen reassigned to Catholic University, Shahan then tested his moral courage to see if the young priest would stand up for what he believed to be right, even in a seemingly trivial matter.

Sheen appears to have become especially favored by Shahan, accompanying the rector to religious, academic, and social events. (“Feast to Be Celebrated,” Washington Sunday Star, March 6, 1927, 22; “St. Vincent’s Benefit,” The Washington Star, February 5, 1928, Part 3, 2.)  Sheen’s name consistently appeared ahead of Msgr. Ryan’s in newspaper articles if Ryan’s name appeared at all. (“Catholic U. Unit To Issue Review: Philosophical Association Will Publish Articles on ‘New Scholasticism’,” The Washington Star, January 2, 1927, 25.) This gave the appearance of a higher status or greater importance at the university — something certain to irritate Msgr. Ryan and excite a desire to put Sheen in his place.

At the end of 1927, however, before Sheen had a chance to consolidate his position on the faculty, Shahan retired.  Monsignor (later Bishop) James Hugh Ryan (1886-1947) replaced Shahan in July 1928.  Sheen was listed prominently among the “notables” present at the new rector’s induction, while John Ryan was not even mentioned. (“Notables to See Induction of Ryan,” The Washington Evening Star, October 14, 1928, 23.)

Nevertheless, Shahan‘s departure marked the beginning of what Sheen later described as a period of great suffering, tantamount to a crucifixion.  As he noted in the Preface to Life of Christ (1958), “This book was written to find solace in the Cross of Christ, as for about ten years of my life I endured a great trial.” (Fulton J. Sheen, Life of Christ.  New York: Image Books, 1977, 9.)

As we will see in the next posting on this subject, the real battle for the soul of Catholic social teaching was just beginning. . . .